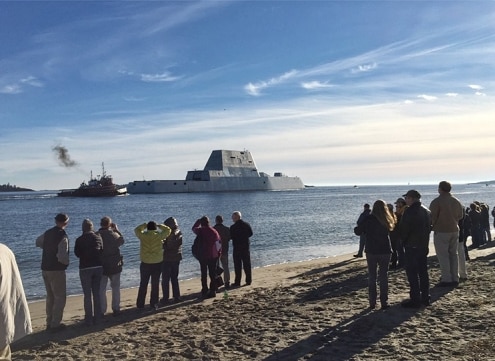 An artist rendering of the Zumwalt class destroyer.
The US Navy’s advanced stealth warship USS Zumwalt began its first sea trials on Monday. The new destroyer cost over $4 billion to build, took several decades to construct from concept, and its design is not without controversy and potential risk.

The Navy’s largest ever guided-missile destroyer, the USS Zumwalt, left the Bath Iron Works on the Kennebec river in Maine to test it sea worthiness. 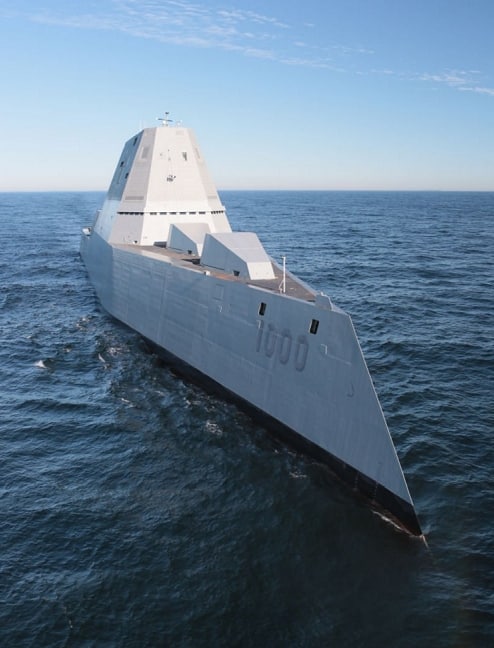 “Over the next several days, the Navy will demonstrate many of the ship’s key systems and technologies,” said Capt. Thurraya Kent, a Navy spokeswoman, according to the Associated Press. “The Navy and the shipbuilder are executing the test program of this first of class ship with extreme rigor and this initial at-sea period will allow for earlier issue identification and risk mitigation.”
At 600 feet long, the Zumwalt is a streamlined guided-missile destroyer with laser weapons and antennas, as well as electric drive propulsion designed to replace the Navy’s current fleet of Arleigh-Burke destroyers. Cost overruns and program delays led the Navy to cap production at three, with costs estimated to top $12.3 billion total, a 37 percent increase on the initial $8.9 billion estimate. Total costs are likely to reach $22 billion, according to AP.
At 16,000 tons, the ship can operate independently or as part of a carrier strike group, and is capable of multi-mission warfare – anti-air, anti-submarine and anti-surface. It has 80 peripheral vertical launch systems, two advanced 155 millimeter guns systems, and two 30 mm close-in guns. Its stern boat ramp can fit two rigid hull inflatable boats, and it has aviation capacity roomy enough for two Seahawk helicopters, or one Seahawk and three drones, according to the US Navy fact file.

Its design features are causing controversy, though. Unflattering descriptions such as a “slab-sided techno iceberg” refer to its pyramid-like bridge, which the Navy said “reduce[s] the ship’s radar cross section, making the ship less visible to enemy radar at sea.”

Then there is the tumblehome hull, a wave-piercing angled front where the ship’s sides slope outward rather than inward, according to Defense News, which intended to slice through waves as much as ride them.

The hull form where the beam of the vessel is narrowed from the water-line to the upper deck has not been seen in boat design since the Russo-Japanese War in 1905, when French shipyard designers used the tumblehome thinking it would create better sea worthiness. What they found was that it created stability problems, but it took the Russians to find it was ideal for navigating through canals.

Drawing on that history, Defense News reported in 2007 that at least eight current and former officers, Navy engineers, architects and naval analysts said they were concerned about the ship’s stability, raising concerns about “rolling over,”“flipping,” and about its stealth ability.

“Stealth was BS to start with and is still BS,” one critic, a civilian naval architect, told Defense News.

“The trouble is that as a ship pitches and heaves at sea, if you have a tumblehome instead of flare, you have no righting energy to make the ship come back up,” Ken Brower told the outlet. “On the DDG 1000 [Zumwalt], with the wave coming at you from behind, when a ship pitches down, it can lose transverse stability as the stern comes out of the water – and basically roll over.” 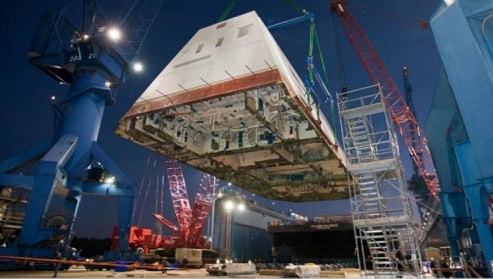 Navy officials and engineers insist the design is safe, and point to extensive testing using computers and a variety of scaled-down models that have already been tested.

Along with questions over design features and costs overruns is concern about whether shipbuilding of this kind is a prudent use of taxpayer’s money in the 21st Century – and the right fit for future warfare.

“No ship is more interesting in the way that it links the past with the questions that surround the future of naval war,” Peter Singer, a senior fellow at the New America Foundation, told AP. “It is a both a throwback and a breakthrough. It is the size of a World War I battleship, originally designed for gunfire shore bombardment, a role many are not sure we even need any more, but utterly revolutionary in other ways.” 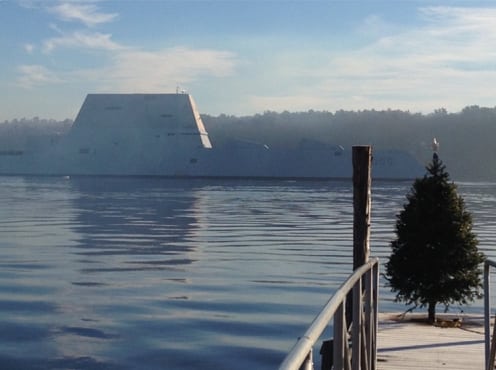