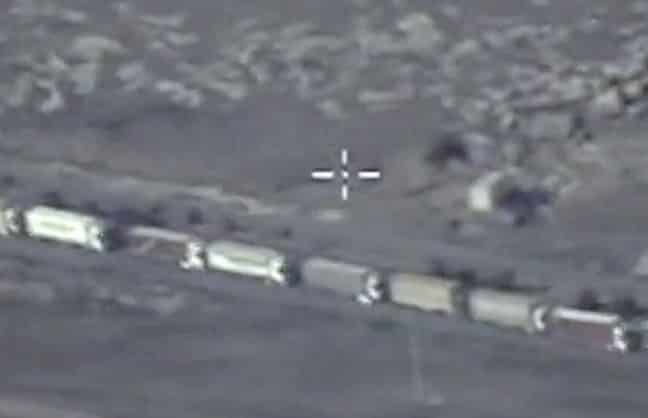 Russian Defence Ministry
Amid a discord in relations over a serious violation of Iraq’s sovereignty by Turkey’s deployment of ground troops, Iraqi Prime Minister Haider al-Abadi accused its neighbor of being a hub for the “majority” of illegal oil smuggling operations by ISIS terrorists.

During a meeting with German Foreign Minister Frank-Walter Steinmeier, Abadi stressed the importance of stopping oil smuggling from jihadi-controlled parts of Iraq and Syria. The Iraqi prime minister also called for international support to help his country fight Islamic State (IS, formerly ISIS/ISIL)

“Turkey is a country neighboring Iraq, and a country that should be friendly with Iraq, they promised us that they would stop the entry of terrorists, however we need more action in order to stop the pumping of terrorists from Turkey into Syria and into Iraq. Also the stopping of the smuggling of petrol from Syria and Iraq and the financing of Daesh [the Arabic name for IS] in a general sense through this illegal trade,” Abadi said.

The Iraqi PM said that the Turkish side was aware of the issue which they promised to resolve under UN Security Council resolution adopted last month that had urged all nations to combat the ISIS threat.

According to the latest estimate more than 43 percent of Islamic State revenue comes from the illegal oil trade. Russian Ministry of Defense reconnaissance data gathered as part of the military operation in the Syrian skies shows that most of the illegal smuggling is done through Turkey.

The hot subject of alleged oil profiteering by the Turkish side follows the downing of the Russian Su-24 bomber by Turkey in Syrian airspace amid the ongoing campaign against ISIS oil infrastructure on the Syria-Turkey border.

Russian President Vladimir Putin described the act as “a stab in the back” by terrorist supporters and accused Turkey of involvement in the illegal oil deals with IS. Following the rogue act by Turkey, Russia introduced several sanctions against Ankara and deployed additional missile defense capabilities to protect its operating space in Syria.

Meanwhile Turkey, which is part of the US-led anti ISIS coalition, continues to take single-handed actions in the region. On Thursday it deployed over a hundred military personnel equipped with tanks and artillery to Iraq, next to the IS-controlled city of Mosul.

Baghdad has called the move a violation of Iraq’s sovereignty, while Turkey continues to insist that the troops are there as part of an international mission to train and equip Iraqi forces to fight against Islamic State.

However in a meeting with German FM, Abadi once again made it clear that the entry of Turkish troops into Iraqi territory is“unacceptable” and happened “without the knowledge or consent of the Iraqi government.”

On Sunday, Baghdad gave Ankara 48 hours to pull out its forces from Iraq.

“In case we have not received any positive signs before the deadline we set for the Turkish side, then we maintain our legal right to file a complaint to the Security Council to stop this serious violation to Iraqi sovereignty,” Iraqi government spokesman Saad al-Hadithi said Monday adding that Iraq is still waiting for Turkey to respond officially.

Russia was ready to bring the matter to the UN Security Council as early as Tuesday, according to a RIA source.

Iraqi Foreign Minister Ibrahim al-Jaafari clarified that Iraq only wants Turkey to withdraw their recent deployment made without Baghdad’s consent and not those Turkish trainers indeed assisting Iraqi forces and militia fighting IS.

“The Iraqi demand is only related to the violation recorded by the presence of Turkish armed forces without coordination with Iraq,” Jaafari said after meeting his German counterpart. “The advisers are another issue; there are advisers from a number of countries and we accepted the principle of advisers, but not the principle of ground forces entering Iraqi territory.”

However a senior Turkish official told AFP on Monday that Ankara is unlikely to withdraw its forces. “We expect them to remain,” the official said, although “it will depend on discussions.”

Turkish Prime Minister Ahmet Davutoglu promised in a letter to Abadi on Sunday that Turkey’s armed forces would not send additional troops until the current tension is resolved.

“No further forces will be deployed to Bashiqa until concerns of the Iraqi government are overcome,” the letter said, Reuters reports, according to sources at the prime minister’s office.

“Turkey is ready to deepen its cooperation with Iraq in coordination and consultation,” it said. “Those who are disturbed by the cooperation of Turkey and Iraq and who want to end it should not be allowed to attain their goal.”