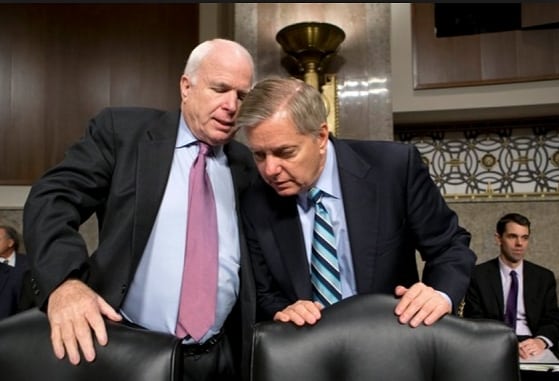 The US is to send some 10,000 troops to Iraq to provide support for a 90,000-strong force from the Gulf states, a leading Iraqi opposition MP has warned. The politician said the plan was announced to the Iraqi government during a visit by US Senator John McCain.
During a meeting in Baghdad on November 27, McCain told Prime Minister Haider Abadi and a number of senior Iraqi cabinet and military officials that the decision was ‘non-negotiable’, claimed Hanan Fatlawi, the head of the opposition Irada Movement.

“A hundred thousand foreign troops, including 90,000 from Saudi Arabia, the UAE, Qatar and Jordan, and 10,000 troops from America will be deployed in western regions of Iraq,” she wrote on her Facebook page.

She added that the Iraqi prime minister protested the plan, but was told that “the decision has already been taken.”

McCain and fellow hawk Senator Lindsey Graham have both been calling for a tripling in the current number of US troops deployed in Iraq to 10,000, and also advocate sending an equal number of troops to Syria to fight against the terrorist group Islamic State (IS, formerly ISIS/ISIL) and the government of Syrian President Bashar Assad. The Americans would prop up a 90,000-strong international ground force provided by Sunni Arab countries like Egypt, Turkey and Saudi Arabia.

“The region is ready to fight. The region hates ISIL – they are coming for Sunni Arab nations. Turkey hates ISIL. The entire region wants Assad gone. So there is an opportunity here with some American leadership to do two things: to hit ISIL before we get hit at home and to push Assad out,” Graham argued during the joint visit to Baghdad in November.

“Saudi Arabia, Egypt, Turkey – they have regional armies and they would go into the fight if we put [the removal of] Assad on the table. Most of the fight will be done by the region. They will pay for this war,” he added.

The US currently has about 3,600 troops in Iraq, including 100 special operations troops deployed last month to take part in combat missions involving hostage rescue and the assassination of IS leaders. The White House is reluctant to commit a large ground force, citing the cost in human lives and money and the possible political ramifications of what will be portrayed by America’s opponents as yet another Western invasion of the Arab world.

The McCain-Graham plan also poses the risk of direct confrontation between the proposed coalition force and Russia and Iraq, which are both militarily assisting the Assad government and may not stay out of the fight – something which the hawkish duo have not factored into their plan.

This is especially true after Turkey’s downing of a Russian bomber plane on the Turkish-Syrian border, which Moscow considered a stab in the back and which sent relations with Ankara to a low not seen for decades.

Baghdad has its own concerns about a Turkish presence on its territory after Ankara sent troops into western Iraq and refused to withdraw them, despite Iraqi protests. Ankara claimed the incursion was made under a 2014 invitation from Iraqi Prime Minister Abadi.