Home World Putin uncertain on need for permanent base in Syria, Russian missiles can... 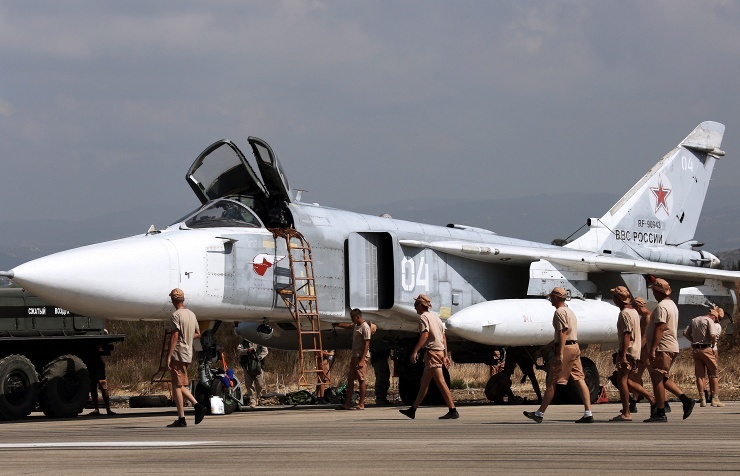 MOSCOW, December 17. /TASS/. Russian President Vladimir Putin is uncertain whether Russia really needs a permanent military base in Syria, because the cruise missiles at its disposal enable Moscow to reach any potential targets located far away.

“Some here [in Russia – TASS] and there [in Syria – TASS] believe that there should be a base. I don’t have such certainty,” Putin said.

European counterparts have voiced the suspicion Russia was hatching plans for having a base there in order to keep everything in Syria under control.

“But why should we keep everything under control there?” Putin said, adding that Russia had demonstrated the capability of its missiles to cover long distances.

“We did not have that resource [since the elimination of the ground-based cruise missiles]. Now we have it. The sea-launched Kalibr has a range of 1,500 kilometers, and the other, air-launched one, X-101, 4,500 kilometers,” Putin said.

“Why should we have a base there? If we are to really hit some target, we will do that,” Putin said.

The Russian leader said that Moscow was hearing repeated promises its interests in Syria would be taken into account, including the possibility of deploying a base there.

“Generally I don’t know if we really need a base or not,” Putin said. He explained that such infrastructures would have to be invested in. In the meantime, the temporary high-tech modules deployed at the base in Syria’s Latakia can be assembled in two days’ time and airlifted back to Russian airdromes by Antonov-22 planes.

“Possibly, there is some sense (in the existence of a base), but all that is still very fishy. This is worth considering. A temporary logistics point? That’s a possibility. But taking roots there, getting bogged in that situation? No, I don’t see an urgent need for that. We’ll see,” Putin said.

“We will continue our air strikes and support the Syrian army’s offensive for as long as the Syrian army is carrying out these operations,” the Russian president said.

According to the Russian leader, the Islamic State terrorist grouping protects illegal oil trade and possible economic interests of a third party in the Middle East region.

Putin made this statement in reply to a question about the motives of Turkey’s downing of the Russian Su-24 bomber over Syria.

Putin reminded the audience of the history of the emergence of the Islamic State terrorist organization in the region. 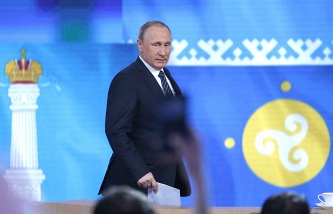 “Vacuum [of power] emerged [in the region] and then elements appeared that were related to oil trade and this situation developed for years,” the Russian president said.

“Business and smuggling on a large industrial scale have been established there,” he added.

“After that, a military force is needed to protect this smuggling and illegal export. And it is very nice to use the ‘Islamic factor’ and draw cannon fodder under Islamic slogans, which in fact simply perform a game linked with economic interests,” Putin said.

“They [militants] started to be lured there. This is how the Islamic State finally appeared, to my view,” Putin said.

The routes of oil deliveries from the regions controlled by extremists have somewhat changed after Russia launched its air strikes against terrorists in Syria, Putin said.

“We have started to deliver strikes against convoys and we now see that they are being split into 5-6, 10-15 tanker trucks and are moving at nighttime but another major oil flow has started to be redirected towards Iraq through Iraqi Kurdistan,” the Russian president said.

“In one place there – and I’ll request the Defense Ministry to show it – we have detected 11,000 oil tanker trucks. Just imagine 11,000 vehicles in one place!” Putin noted.

Russia’s military operation is not a burden for the budget

According to the president, Russia did not start a war in Syria. It is carrying out separate operations, which are not a serious burden for the state budget, Putin said at the annual news conference on Thursday.

“We did not start this war. We are carrying out separate operations that involve our air force, space troops, anti-aircraft systems and reconnaissance,” Putin said when asked if Russia would have enough resources for its military operation in Syria. The journalist had finished his question with a well-known phrase, “It is easier to start a war than to finish it.”

“It’s not a serious burden for the budget. We simply redirected part of the funds, which we had originally planned to allocate for military exercises, to our military operation in Syria,” the president explained.

“We need to add something. But it has no substantial importance for the state budget,” Putin stressed.

Vladimir Putin said he supports the US initiative to prepare a resolution of the UN Security Council on Syria, saying its suits Moscow on the whole.

“On the whole – and I will probably say an important thing now – we support the initiative of the United States, including on working out a resolution of the UN Security Council on Syria,” he said on Thursday. “It is this draft resolution that US Secretary of State (John Kerry) came to Moscow with,” he added.

“I think that after the Syrian authorities familiarize themselves with the draft resolution, they will also find it suitable,” he said, admitting that there could be certain points they may not like. “In the attempt to solve the conflict that has continued for many years, a compromise is always possible, but concessions must be made on both sides,” he explained at the annual news conference.

“We believe that on the whole it is an acceptable proposal,” Putin said, adding that certain points still had to be worked on.

The US initiative shows that this country and Europe “are highly concerned about what is going on in the Middle East, in Yemen, in Syria and Iraq,” Putin said.

“We will be contributing in very way to the settlement of this crisis and will seek to see that the solutions that can be found suit all parties no matter how difficult the situation could look,” he added.

The president said that in the first place joint work was needed on a new constitution of Syria, after which a credible mechanism of control over the possible future elections should be created. “And then, on the basis of these very democratic procedures, Syria must determine itself what forms of government are more acceptable there and who should be at the head of the country,” he summed up.

The president has also said that Russia will never agree for everyone from the outside to force a leader upon Syria.

“We will never agree for someone from the outside to force any leader upon anyone anywhere,” Putin told an annual news conference. “This runs absolutely counter to common sense and international law,” he said.

Putin noted that he discussed this matter at his recent meeting with US State Secretary John Kerry. “Our position has not changed, it is principled,” the president reminded. “We think that only Syrian people can decide on who will lead them and by what standards and rules,” Putin said.

The president noted Russia has reached progress in uniting efforts of Syria’s army and the Syrian armed opposition in the struggle against the Islamic State.

Pointing out that French President Francois Hollande came up with an idea to unite efforts of the Syrian army and part of the armed opposition to battle the IS, Putin said, “We have partly managed to do it.” Putin also voiced confidence that the Syrian issue can be resolved by political means only, and Russia’s plan in this regard is almost identical to the American one.

“There is no other way to resolve this situation. This has to be done sooner or later,” he said,” Putin said at his annual news conference, adding that “better sooner than later.”

“There will be less victims and expenses, there will be fewer threats, including for Europe and the United States, since 14 people were killed in the United States. ISIS made its way there, the U.S. law enforcement agencies admitted that this was a terrorist attack, and by ISIS at that,” Putin said.

He noted that there was no way of solving the problem other than political. Russia’s plan to resolve the conflicts is similar to that of the United States. “The plan coincides in its key aspects with the one offered by the United States, strange as it may seem. It implies joint work on the Constitution, the creation of the tools to control future snap elections, the elections themselves and recognition of their results,” Putin added.

Putin admitted that this was “a difficult thing,” since there are reciprocal claims. Some people like this group, some don’t, someone wants to work with the Syrian government, someone refuses categorically. “However, all warring parties need to pluck up courage to meet each other halfway,” he said.