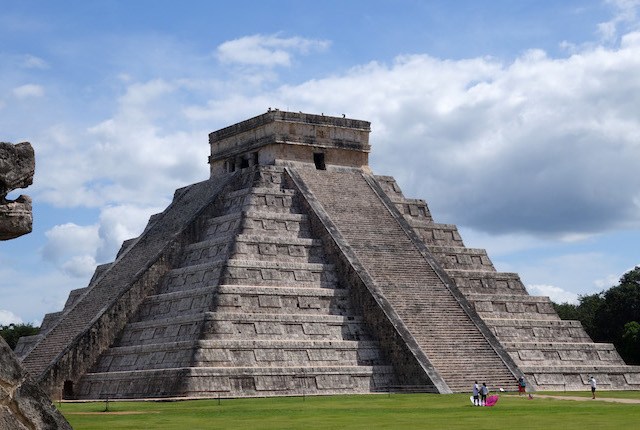 The Aztecs are a fascinating civilization to study when you’re at school. With their costumes, enormous buildings, wild ceremonies, and prevalence for human sacrifice, they’re far more interesting than, say, the ancient Greeks or the ancient Romans in the eyes of most people. Many of us forget most of the things we learned about them when we leave school, though. Time moves on, and our minds become filled up with other (more relevant) things. We forget the true horror of some of the things our teachers told us as casually as if they were discussing what to eat for lunch.

When ancient Aztec culture is referenced in mainstream news or entertainment, its portrayal tends to be cartoonish. You can see that in action at online slots websites like RoseSlots.com. Slots like ‘9 Masks of Fire’ and ‘Amazing Aztecs’ make money by playing on Aztec imagery but cut out the darker side of the story. It’s not hard to imagine why. The last thing any online slots developer wants to do is scare players off with gore and turn them off the idea of spending money on their creations. That would defeat the whole objective of making online slots in the first place. If your recollection of Aztec history has faded over the years, we have a shocking reminder for you.

There’s no way to dress up this headline, so we’ll just give it to you straight. At the very end of 2020, archaeologists discovered an enormous tower made of human skulls in Mexico, hidden right underneath Mexico City. Based on the evidence recovered from the site so far, it appears that the owners of the heads were, as many of you will no doubt already have suspected, victims of human sacrifice.

Discoveries like this one are unusual but not unprecedented. We even know the Aztec name for towers like this. They’re called “tzompantli,” and they were created after mass sacrifices either as a way of honoring the dead or as a warning to their enemies. Historians aren’t quite sure which. While others have been found in the past, this tzompantli, known as “Huei Tzompaltli,” is the largest and most impressive. Parts of it were found in 2015, but it’s only late last year that archaeologists revealed the full extent of the tower after further excavation work. In total, the skulls of 484 people were used to build the tower, with no mercy shown to men, women, or even children when it came to picking candidates for the sacrifice. It’s a gruesome sight, and yet at the same time manages to be somehow compelling.

Historians have never satisfactorily resolved the question of why the Aztecs sacrificed their own people in such big numbers. As we alluded to above, inspiring fear in their enemies’ hearts was almost certainly part of the plan. If it weren’t, there would have been no reason for Aztec leaders to go to so much trouble having the bones of the deceased arranged into patterns and placed on public display. Coming across a giant column of human skulls would make most invaders question their next move and probably kept the Aztec civilization going for longer than it otherwise might have done. However, sacrifice was perhaps also about appeasing the gods that the Aztecs believed in, who were numerous and bloodthirsty. Humans were sacrificed for a wide and varied number of reasons, including a wish for fertility or a desire for the rain to return after dry spells.

This latest discovery was made in Templo Mayer – an already-established archaeological site in Mexico City. The temple was always likely to be a hot spot for sacrificial activity because it’s explicitly dedicated to Huitzilopochtli – the God of human sacrifice and war. The skulls are believed to be approximately five hundred years old and were buried more than ten feet below street level. Millions of Mexicans have been walking on top of these skulls for centuries, and they never even knew they were there! Mexico’s Culture Secretary Alejandra Frausto Guerrero described the find as the most impressive archaeological discovery in the country for more than ten years, although it isn’t immediately clear what the government or the archaeologists intend to do with it.

One option would be to put the tower on human display, but that might not be practical for reasons other than the obvious fact that some people would find such a ghoulish spectacle unpalatable. Any museum that wanted to host this tower would have to make a lot of room for it. It’s sixteen feet wide and as tall as the average home, featuring rows of skulls savagely impaled on poles almost as if they’ve been threaded. There’s even a little flesh clinging to the bones in a few examples, as the skulls weren’t skinned before they were impaled. It would be no small job to move them, and that task might not be possible at all. After five hundred years underground, the tower is a little delicate, and it would probably have to be cut up before it could be moved anywhere else. That would damage the artifact and could also be construed as disrespectful to the deceased.

Finds like this one would be much more common if it weren’t for the actions of the Spanish after they first arrived in Mexico. Hernan Cortes’ forces were ordered to destroy everything they found in Aztec lands, and that included tzompantli. There were probably thousands of them during the Aztec Empire’s peak years, but only a few survive today, and most of them are fragmented. Archaeologists can’t yet even be sure that this one hasn’t been attacked or damaged in some way, although all signs point to the idea of it being in one piece. Many Aztec artifacts and records were lost as Mexico-Tenochtitlan fell to the Spanish, and some of what was lost can never be regained. Aspects of Aztec life will likely forever remain a mystery to us, and so discoveries like these are important because they bring us a step closer to understanding them.

We tend to think of human sacrifice as something that happened thousands of years ago when humans still lived in caves, and almost nothing was understood of science and technology. Finds like this remind us that we haven’t progressed as far or as quickly as we think and that human sacrifice was a hazard of daily life in Mexico during the Tudor period in England. We wonder what everyday rituals we observe today that might be considered barbaric by archaeologists five hundred years from now?