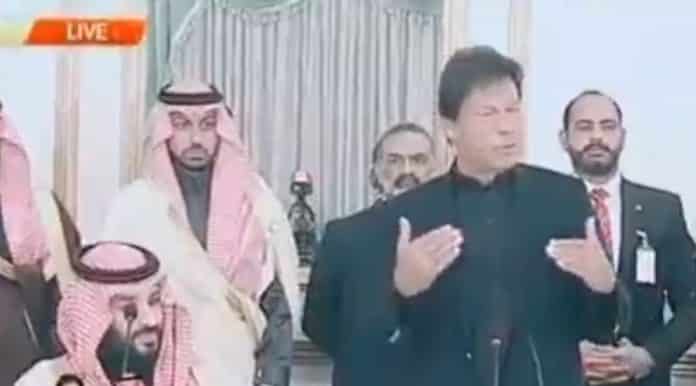 It is due to the undemocratic actions, being taken by the coalition government of the PDM-an alliance led by the Prime Minister Nawaz Sharif’s PML-N, which also includes major party-PPP and by the former Prime Minister Imran Khan-Chairman of the PTI that instead of reducing, political turmoil in Pakistan is rapidly accelerating.

In this regard, ex-Premier Khan who started a long march popularly called “Haqeeqi Azadi March” (Real Freedom March) to get rid of the US-led ‘imported government’ and other internal entities, as he claimed, reached Islamabad on May 25, this year.

Addressing the massive crowd a few yards away from the Red Zone in Islamabad and instead of holding a sit-in—without getting a date for the next general elections from the government, he returned after giving an ultimatum that if in the next six days, the government did not announce the date of elections, he would return again with another long march.

PM Shahbaz Sharif stated in the National Assembly (NA) on May 26, 2022 that NA will decide date of next elections and also said: “The doors for talks are open; I can form a committee”.

Media disclosed that PTI had decided to resume contacts with the federation. These talks will be behind-the-scenes.

And backing out from their commitment, PML-N’s Vice-President Maryam Nawaz said that the current regime would complete its tenure up to August 2023.

Surprisingly, without taking other stakeholders on board, under the supervision of the coalition government, the National Assembly on May 26, 2022 approved a bill to bar overseas Pakistanis from voting and stop the use of Electronic Voting machines (EVMs) in the forthcoming elections by ignoring their contribution for country’s revenue. PTI leaders pointed out that the real aim of the government is to deprive the overseas Pakistanis from the right of voting and also to open the doors for rigging in the elections.

Besides, under the pretext of draconian powers given to the National Accountability Bureau (NAB), the regime led by Shehbaz Sharif also amended the law in their favour.

Meanwhile, hearing a suo motu case, a five-judge larger bench of the Supreme Court of Pakistan (SCP) headed by Chief Justice of Pakistan (CJP) Umar Ata Bandial restrained the executive authorities from transfers, postings and removal of officials of FIA and NAB involved in the investigation or prosecution of high-profile corruption cases against top government functionaries—government interference in the affairs of prosecution as well as investigation branches. The court ordered that no prosecution case would be withdrawn.

CJP also advised Attorney-General of Pakistan Ashtar Ausaf to carefully evaluate the choice of the new chairman of the NAB.

It is notable that at public gathering in Fateh Jang, Maryam Nawaz allegedly remarked that former Premier Imran Khan only lasted in office for over three years as he had the support of ex- intelligence officer [Chief of Inter-Services Intelligence (ISI) Lt. Gen. Faiz Hamid].

In a statement, the Inter-Services Public Relations (ISPR) called it unlawful practice of dragging the armed forces into politics, warning that such unsubstantiated statements were extremely damaging for the country. The statement did not specifically mention any politician or party, but explained that the military leadership was perturbed over remarks given by both the government and opposition parties.

It is mentionable that the Supreme Court on May 17, this year in its decision on a presidential reference seeking interpretation of Article 63-A of the Constitution clarified that the votes of defecting lawmakers will not be counted. Their disqualification period has been left to the Parliament. Thus, the apex court has eliminated horse-trading permanently.

In this respect, the Election Commission of Pakistan de-seated 25 PTI dissident MPs who had voted for PML-N’s Hamza Shahbaz in the Punjab chief minister’s election.

Notably, regarding the May 25 long march, several undemocratic moves by both the government and PTI such a brutal crackdown against the PTI protesters—arrests, deployment of containers, acute teargas-shelling and stone-throwing on the police by the PTI activists in various regions, particularly Islamabad resulted in the martyrdom of 5 persons and 3 policemen, injuring more than 200 people, including policemen.

It is noteworthy that the then PM Nawaz Sharif-head of the PML-N and his daughter Maryam Nawaz had, continuously, been criticising the Supreme Court and the Army since July 28, 2017 when the apex court announced its verdict in connection with the Panama Papers case and disqualified the ex-Premier Sharif regarding the corruption charges. Thus, they had been misguiding the people and were provoking them against the key institutions.

In November 2020 when the PDM had launched a movement to topple the elected regime of PTI, addressing a PDM rally in Gujranwala via a video link from London, ex-Prime Minister Nawaz Sharif accused army chief Gen. Qamar Javed Bajwa and ISI chief Lt. Gen. Faiz Hameed of rigging elections and toppling his government to install Imran Khan in his place.

Similarly, after his ouster through no-confidence motion, the former Premier Khan who was earlier targeting the SCP, and afterwards started appreciating it when several verdicts came in PTI’s fvaour and against PML-N.

The ex-PM Khan who earlier appreciated the Army, but criticised it indirectly, stating: “I knew the match was fixed”—without evidence has been blaming Army for his removal.

In this context, in an interview with a private TV channel, former Prime Minister Imran Khan stated on June 1, this year: “If the establishment doesn’t make the right decisions then…the Army will be destroyed because…if it[Country] goes bankrupt…Pakistan would break into three parts. After it [Army] is hit, what concession will be taken from us? Denuclearisation”.

He added that he had clearly told the “neutrals [a veiled reference to the establishment or Army] if this foreign conspiracy to remove my government is successful then our economy will go down…the current defining moment is a trial for the establishment”.

Next day, mainstream parties’ various leaders such as Chairman of PPP Asif Ali Zardari, Prime Minister Shehbaz Sharif, including those of the other ruling coalition parties unleashed a tempest of criticism against the PTI chairman, explaining that in retaliation of his ouster, Khan has crossed the redline, as his anti-Pakistan and anti-Army remarks show. He is creating panic in the country.

The National Assembly on June 6, 2022 adopted a resolution condemning PTI Chairman Imran Khan’s statement against the armed forces as well as Pakistan’s security and safety of nuclear weapons.

In fact, Pakistan’s politicians have always claimed that they nourish democratic ideals, but, we could not establish this system on a strong footing, as under the cover of democracy, they prefer their selfish personal interests over the national interests.

Alliances are formed to win the elections or topple the rival regime. Political leaders also misguide the general masses by forming extreme opinion among them against their opponents.

At present, PTI workers have been distorting Army’s image in such a way that general masses should forget the sacrifices and services of the armed forces such as the resettlement of the Internally Displaced Persons during the Swat and Malakand military operations, counter-insurgency operations and restoration of law and order on many occasions—during catastrophic periods—floods, earthquakes, coronavirus pandemic, locusts’ attacks etc.—also matching response to Indian forces at the Line of Control and to stop infiltration of terrorists inside Pakistan from Afghanistan.

Regrettably, changing their political differences into political enmity, some irresponsible entities of the PTI and the PDM are moving the country towards anarchy or civil war.

Even, PML-N’s parliamentarian and Federal Minister for Defense Khawaja Muhammad Asif recently admitted that the coalition partners in the government should move for seeking fresh mandate from masses to avert a civil war.

At this crucial hour, Pakistan is facing grave crises and problems like corruption, soaring prices of commodities, energy-shortage, load-shedding, unemployment etc., and dependence upon the US-led developed countries-IMF and World Bank for financial aid. Particularly, within some days, the federal government twice increased the prices of petroleum products and electricity for the release of $1 billion tranche loan from the IMF.

Meanwhile, taking cognizance of the prevailing political and economic situation and uncertainty in Pakistan, economic analysts have warned about tough days people will face in the near future.

Taking note of the present multiple crises, Prime Minister Shehbaz Sharif emphasised the need for a grand dialogue, involving all stakeholders—for developing a consensus over the national economy. But, it is misfortune of the nation that the PTI has rejected the offer.

So, instead of launching second long march, PTI Chairman Khan should accept Premier Shahbaz’s offer of grand dialogue, and the ruling alliance must also announce early elections after settling various issues with the PTI such as caretaker setup etc.

At this critical hour, armed forces are coping with internal and external challenges—politicians must not tarnish, especially Army’s image as an institute, while the government and the opposition leaders, including all other segments of society must show selfless national unity to pull the country out of the ongoing serious crises.