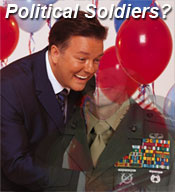 The Hatch Act 0f 1939:  What is it and how does it relate to our Armed Forces

Does the Hatch Act of 1939 apply to the men and women of the U.S. Armed Forces and prevent soldiers from engaging in partisan politics?  Does this law apply to the leadership of the U.S. Military and is it being violated today without enforcement?

Recently, I have received a note from a well rounded highly educated experienced soldier who said "Our military has become so politicized that leaders feel as long as they say and do (torture) whatever the politician in charge says – they will get promoted. Someday, a politician and crew may (I pray) come to power and find out what the Hatch Act says and use it to hammer a bunch of troops who’ve violated the Act against making partisan political statements in uniform or out. The Hatch Act is the U.S. Consitution and Bill of Right rolled up in one within our Armed Forces – meaning it limits a military members partisn political rights, so that our Armed Forces in not taken over by one extremist political party or another".

So what’s this about?  Well, let’s examine.

Led by a Republican Congress, the Hatch Act Reform Amendments of 1993 permit most federal employees to take an active part in partisan management and partisan political campaigns.  Nevertheless, Concerns about the political activities of government employees is almost as old as the Republic.

Under the leadership of Thomas Jefferson, the nation’s third president, heads of the executive departments issued an order which stated that while it is “the right of any officer (federal employee) to give his vote at elections as a qualified citizen… it is expected that he will not attempt to influence the votes of others nor take part in the business of electioneering, that being deemed Columbia and certain employees of state and local governments."

The Hatch Act grew into a general tradition of electoral reform. In essence, it finally did away with the last vestiges of patronage, and one could say it was the end of the civil service reforms started in the 1880s. But the most significant impetus, affecting both its timing and its content, was the widespread allegation that Works Progress Administration (WPA) funds had been misused by staff members and local Democratic Party politicians during the congressional elections of 1938.

Although criticism of WPA workers centered on Kentucky, Tennessee, and Maryland, the political clout of federal dollars nationwide in the midst of the depression was undeniable; even without malfeasance, programs like the WPA attracted votes. Many Republicans, however, were convinced that WPA workers had gone further, intimidating staff members, pressuring clients, and using public funds for political purposes.

Named after Senator Carl Hatch of New Mexico, the law was officially known as An Act to Prevent Pernicious Political Activities.  It was put forth following disclosures that WPA officials were in fact using their positions to win votes for the Democratic Party, just as many had alleged. Hatch, himself a Democrat, saw this as outright corruption which should not be tolerated under any circumstance by either political party, a feeling shared by most of his colleagues in the Senate.

The original Act forbids intimidation or bribery of voters and restricted political campaign activities by federal employees. It prohibits using any public funds designated for relief or public works for electoral purposes. It also forbids officials paid with federal funds from using promises of jobs, promotion, financial assistance, contracts, or any other benefit to coerce campaign contributions or political support.

The most restrictive measure was brought about by Republicans in the Senate. It dictates that persons below the policymaking level in the executive branch of the federal government must not only refrain from political practices that would be illegal for any citizen but must abstain from "any active part" in political campaigns.

An amendment on July 19, 1940 extended coverage to state and local employees whose salaries include any federal funds. This amendment also set an annual ceiling of $3 million for political parties’ campaign expenditures and $5,000 for individual campaign contributions.

The act precluded federal employees from membership in "any political organization which advocates the overthrow of our constitutional form of government." During the Second Red Scare, this designation was interpreted to include communist and labor organizations.

In passing the Hatch Act, Congress affirmed that partisan activity government employees must be limited for public institutions to function fairly and effectively. The courts have held that the Hatch Act is not an unconstitutional infringement on employees’ first amendment right to freedom of speech because it specifically provides that employees retain the right to speak out on political subjects and candidates.

RULES OF THE HATCH ACT

All civilian employees in the executive branch of the federal government, except the President and the Vice President, are covered by the provisions of the Hatch Act.

These employees may not:

* use official authority or influence to interfere with an election
* solicit or discourage political activity of anyone with business before their agency
* solicit or receive political contributions (may be done in certain limited situations by federal labor or other employee organizations)
* be candidates for public office in partisan elections
* engage in political activity while:
o on duty
o in a government office
o wearing an official uniform
o using a government vehicle
* wear partisan political buttons on duty

Additional Partisan Activity Prohibitions
Employees of the following agencies (or agency components), or in the following categories, are subject to more extensive restrictions on their political activities than employees in other Departments and agencies:

Penalties for Violating the Hatch Act
An employee who violates the Hatch Act shall be removed from their position, and funds appropriated for the position from which removed thereafter may not be used to pay the employee or individual. However, if the Merit Systems Protection Board finds by unanimous vote that the violation does not warrant removal, a penalty of not less than 30 days’ suspension without pay shall be imposed by direction of the Board.

Federal employees should also be aware that certain political activities may also be criminal offenses under title 18 of the U.S. Code.

So back to the oringal question Can Soldiers Participate in Partisan Politics?  It’s sure something to think about as we decide which way we go forward this election season.