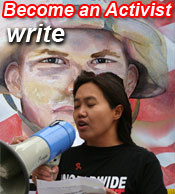 Got the Urge to Write and Become an Activist Soldier?

Watch "What Were You When You Were Alive" video

On May 1, 2008, at the Grossmont Community College Student Union, 8800 Grossmont College Drive, El Cajon, California, veteran English teacher and author, Jim Musgrave (a.k.a. Efraim Zimbalist Graves) will present his tale of Gulf War pilot and homeless vet, Richard Spencer, who is able to fight the authorities in San Diego and make it safer for homeless vets to live there. The presentation will be from 12:30 PM to 1 PM at the Annual Literary Arts Festival, where the theme for this year is "The Writer as Activist."

Although a work of fiction, this story uses Musgrave’s military experience of eight years in the Naval Reserves (also, his father was a Pearl Harbor Survivor who worked for the Navy for 30 years), and his own battle and recovery from alcohol addiction, to add a lot of realistic details to the story. At a little over 30 minutes long, this audio story also includes a lot of humor.

"I wrote the story because I wanted people to recognize the plight of homeless veterans and how difficult it is to cope after experiencing combat. If just one person looks at a homeless person differently after listening to my story, then I will have succeeded," said Musgrave. The author, who also teaches English classes at Grossmont to students online and in the classroom, wants his students to understand the problems of modern veterans returning from war, and this story was his attempt to get them active politically. "The writer must be active in political causes," added Musgrave, "because our society is already alientated as it is, and only through dramatic communications will we be able to get the true message out to those who care."

The story is available for download (.88 cents) at Sniplits.com. You can also watch this video trailer:

The theme of the three-day Literary Arts Festival, "The Writer as Activist," is to show how the writer must be politically involved to effect change. Internationally renown political poet, Marge Piercy, will talk on May 2, 2008.