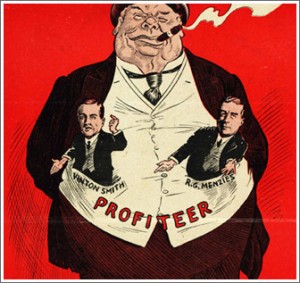 As the mainstream media continues to engage in its endless distraction over Senator Harry Reid stating the ridiculously obvious, New York’s Black Star News is running an otherwise completely overlooked little story about the firing of Eric Amankwah, a 28-year-old Ghanian, by Delta Airlines for reporting a serious breach of security.

Amanakwah alleges that on January 2, a mere eight days after the Christmas Day attempt on Flight 253 over Detroit, he was instructed by his supervisor, Yvonne Green, to circumvent JFK security and deliver an unattended suitcase to an out-going flight without inspection. When he protested over the breach of security, he was advised by Ms. Green that he shouldn’t worry about it. It was done routinely. If the suitcase missed its connection Delta Airlines would be fined.

After carrying out Green’s instructions, when Amanakwah returned Green was waiting for him with a second supervisor, Mohammad Taj, to which Ms. Green reported, “Eric completed the job.” Taj then said, “Good,” then left.

According to the Black Star article by Milton Allimadi, after discussing the matter with other Delta employees, Mr. Amanakwah began to have second thoughts about what he had been instructed to do, so he sent an e-mail up Delta Airline’s chain of command, including one to Delta’s CEO, Richard H. Anderson, expressing his concern over the matter. The following Tuesday he was fired.

Black Star News followed up on the story by publishing a request for any other airline employees with similar stories of security breaches to come forward. In response they were contacted by Ms. Mary Stewart-Joyce. She indicated that she was hired by Delta Airlines on May 8, 1997. She goes on to say:

“After completion of the new hire training I was assigned to the Federal Inspections Area at JFK. The lead supervisors were Mavis Thomas, Joseline Lucas, Alix Laincy and Danny Cronin: Mr. Cronin was my assigned supervisor.

“I was not signed up for the Port Authority security class and therefore was forced to work in FIS without the proper Port ID pass. This was a violation of Federal Law. I was told to turn my building access swipe card around and to wear it lengthwise behind my Delta ID so that it would ‘look’ as if I had a port ID.”

Ms. Joyce indicated that she was finally sought out and detained by the customs office for failing to have the proper I.D. She was informed by the customs officer that they were told to find her on the floor and hold her so that Delta Airlines could be fined for breaching security. Later she was informed by a customs supervisor that he was the one who had ordered her picked up and held because he was “sick of Delta’s total disregard for security.”

Ms. Joyce goes on to relate other breaches by Delta Airlines. She says that she knew many of the things that she was instructed to do were a breach of security, but there was very little that she could do about it, because as a single mother, she feared termination. But at this point, she says, she’s not only willing to come forward, but sign a deposition.

As dangerous as this kind of irresponsible behavior is to the flying public, the arrogance of corporate, social, and political entitlement represent a much greater danger to America as a whole. Gross hypocrisy and the entitlement of power have become indelibly ingrained in the very fabric of America. That makes lying, deceit, and the routine manipulaion of the American people just a simply matter of doing  business, by both corporations and government alike.

What’s in the best interest of the American people has become secondary to the corporate pursuit of the dollar.  This fact is clearly demonstrated by this multi billion-dollar airline’s willingness to put the lives of its passengers in jeopardy just to avoid a fine that amounts to pennies. And many of the government officials that we depend on to protect us are just as corrupt. Washington has become filled with politicians elected to represent the people, who have become nothing short of government-paid lobbyists for big business – Joe Lieberman is an obvious case in point. He’s willing to throw 67% of his constituents under the bus for his own personal gain.

So while Al Qaeda undoubtedly poses a threat to America, it doesn’t come close to the threat posed  by the corruption, self-service, and total disregard of American ideals by the ever-growing bunch of demagogues that we’ve casually allowed to gain control of our lives – and even as I write this sentence it’s becoming progressively worse. They’ve seized control of the media, virtually destroyed our educational system, and have let us all but helpless to even grasp what’s happening to us.

America needs to understand that the time to become actively engaged in our own welfare has all but passed. We’re already waste-deep in a class war. Hyperbole? Just take a moment to consider how far we’ve declined since WWII.

They tell us we’re involved in a “war on terror.”  But who’s fighting that war, and making all of the sacrifices? When America went to war during WWII, all of America was at war – the rich and poor, Black and White, young and old. But now, the only ones sacrificing for this so-called “war on terror” are the poor and middle-class. The rich hopes it goes on forever, because they’re benefitting from it greatly.

Then they tell us, “Oh, no! It only looks unfair. The difference between now and WWII is that now we have a ‘volunteer military’.”

‘Volunteer military?’  Let’s take a look at that: Our so-called ‘volunteers’ are made up of poor and middle-class young people who are there in lieu of a job so they can try to get an education, or feed and insure their young families. One volunteers as an act of patriotism, not as an attempt to survive.

Clear evidence of my contention is the enlistment rate of the rich. If our ‘volunteer military’ is indeed built upon patiotism, the children of the rich certainly can’t have much love for America, because they’re volunteering in piss-poor numbers.  As a direct result of the poor enlistment rate of the rich and privileged, our troops have to take up the slack by placing their lives on the line for two, three, and four tours of combat duty – then these very same slackers are reluctant, and even resistant, to enhance military benefits, even as they pay the personnel of their contractor cronies three and four times what they pay our troops.

Thus, calling our troops ‘volunteers’ is no more accurate than calling your trash man a volunteer. He didn’t volunteer to collect the trash. He’s doing the very same thing as our brave troops in Afghanistan and Iraq, simply trying to feed his family. He just doesn’t have to die to do it.

So America needs to wake up before it’s too late. We’re no longer living in the America we once knew. We’re not safe; we can no longer trust what’s in our food and water; our young people are being taught that it’s ‘un-American’ to put family before corporate profit; and the country is brimming over with demagogues, tycoons, and self-serving politicians having wet dreams over the prospect of personal windfall – in both money and power – of another attack on America.

There’s a reason why Cheney continues to insist that President Obama say “War” when he mentions terror –  because “war” means money.

I was contacted by Ms. Mary Stewart-Joyce regarding this story. She indicated that she wasn’t actually detained by the customs officer for not having the proper I.D. She was warned by the official that they had been instructed to locate her on the floor without the proper I.D. so Delta Airlines could be fined. Thereafter, she took it upon herself to sit out the remainder of her shift in the Arrival Control Office.