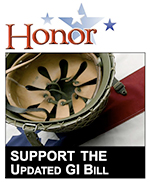 Delivering the Dept of Veterans Affairs (DVA) education benefits from the Post-9/11 GI Bill is one area the DVA does not want to screw up and its commitment in the face of continuing criticism from veterans groups on other DVA benefits is the topic of DVA communiques to state veteran affairs bureaucrats to presume a veteran is eligible and move the benefits process forward.

Standing in stark contrast to the infamous DVA culture of no and denial of benefits for disabilities sustained during service, the intended message from the DVA regarding the GI Bill appears a message of yes. The apparent effort behind the presumption of eligibility for education benefits actually has the tone of the-guy’s-a-vet, get-him/her-what-he-needs urgency that would represent a historic departure in this government agency that has taken on the face of an implacable enemy for many veterans.

Reviewing some statistics from last year, implementation of the GI Bill arguably represents the greatest success of the Obama administration for veterans during its first year in office, and will likely get prominent mention in the State of the Union address Wednesday night, taking note of the fact that states and educational institutions had initially been bogged down as the early point of contact in the process of getting veterans their new education benefits.

In a Jan. 14, 2010 Dear Colleague letter to state veterans affairs directors and members of the veterans’ community from Michael Walcoff, DVA Deputy Under Secretary for Benefits, Walcoffnotes the DVA has processed some $1.3 billion in education payments for some 137,000 student veterans, while urging improvements and positive action.

The Jan. 14 Shinseki letter urges states to pursue the streamlined delivery of information about education benefits to students, colleges and universities, and expedite the subsequent delivery of education benefit claims to the national DVA resulting in paying student-veterans in a matter of weeks and months; and not years like the processing of typical disability benefits claims.

“A Certificate of Eligibility is not required for submission of the enrollment certification. If a student has provided any documentation to show that he or she is a veteran or dependent that is likely entitled to benefits, an enrollment certification should be submitted as soon as the student enrolls in classes.,” reads a Lessons Learned memorandum [emphasis mine] accompying the Shinseki letter.

With a semester of the Post-9/11 GI Bill behind us, we are providing a list of ‘lessons learned’ in hopes of working together for a smoother spring enrollment period – Early submission of enrollment certifications is essential to timely payment.

– The Post-9/11 GI Bill brought a new dimension to VA education benefits that now involves schools’ business offices. Many payment issues can be addressed by the school’s certifying official.

– It is critical to VA’s processing that students are correctly identified as chapter 33 participants to prevent misrouting of claims.