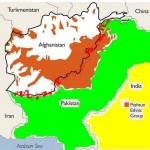 I will open this synopsis of consolidating Afghanistan into a cohesive nation by paraphrasing another well-organized, ex-military mind who recently stated, “America’s greatest failure at this time in Afghanistan and other struggling or emerging countries, is our failure to use our imagination.”

How does this profound statement expose the bottom line of our efforts to support Afghanistan and the rest of the greater Indian sub-continent?

Note: For those whose feelings are hurt by calling that land mass the greater Indian sub-continent, I am using it in historical geological terms, not ‘modern’ political terms.

Americans love things to be organized. We like lines that define territories. Examples would be villages, townships, cities, gerrymandered voting districts, counties, states, and nations. We’ve found our country has found economic prosperity by fabricating maps*.  Since it works well for us, it is a simple conclusion that westerners want nonstate territories like Afghanistan to adapt to our way of thinking. It isn’t going to happen unless there is a new model that fits the nature of the sub-continent. That takes imagination. And here’s why.

In recent history, the land of Afghanistan has been “governed”—I use the term ‘governed’ rather loosely—by a colorful mosaic of independent, often hostile tribes. The main tribes are Pashtun, Tajik, Hazara, Uzbek, Turkmen, Nuristani, Baloch, and Pashai. Probably the largest tribal groups, at least from a land area, are the Pashtun, Tajik and Hazara.  These larger groups are partially divided as Northern Pashtun, Southern Pashtun, Northern Tajik, Western Tajik, Southwestern Tajik, etc., etc, and the list goes on. Further, the many mini-tribes each have their own, independent tribal leaders, tribal laws to fit their local conditions, and a fierce determination to protect their real or imagined boundaries and their real or imagined ability to traverse wherever they wish, whenever they wish. Their tribal maps are much like America’s political gerrymandering with no national protective legal system other than tribal leaders and variable religious posturing.

Talking to a specific tribal group means talking to the leaders of no more than one tribal group—if those leaders can be identified and approached. All the rest of the tribal groups have to be addressed in a similar manner so they can approach a mutually acceptable agreement, unheard of in that culture for hundreds of years.

It is very doubtful that we will get this ancient, combative culture under one collective roof called the Nation of Afghanistan without creative, imaginative thinking, without setting a higher standard so the Afghan tribes can see economic benefits each for individual tribe or sub-tribe. So how do we do this?

After we find the leaders—in some cases no small task— we have to get their emotional and logical attention before they will listen. We have to remember it is about them, not about us. We have to restore this ancient people’s once given sense of a higher purpose. We have to let them feel and know they can achieve things we as of yet can only dream of in America.

This is not about a new car parked in front of every home or hut, though transportation is important. This not about two square meals and tea everyday, though that is important. This is about getting their group attention so that the new cars, the meals, tea, modern healthcare, education and other benefits are the natural fallout of cooperation.  So how do we do this?

Afghanistan lacks the infrastructure including energy, roads, properly distributed clean water, adequate sewage systems, access to its natural and valuable resources, access to the rule-of-law, and education for all. Currently, Afghanistan does not have the skill sets and financial resources to achieve this. We NATO allies and the World Bank can poor money down a rathole, and in the end, it will end up lost in the rathole. The infrastructure that will be built, will crumble to nothing, once again leaving an impoverished, battle-scarred semi-nation. So what is the answer?

A specialized organization like the concept of a Greater Himalayan-Hindu Kush Common Market is the only answer I can see that will stir the common imaginations of the Indians, Pakistanis, Afghans, Sri Lankans, the mountain nations and the island nations of the sub-continent. India understands the basics and they are already moving in this direction by building the new hydroelectric dam in Afghanistan. Nothing happens without energy. The British understand by building a highway the will give Afghan farmers a route to the Arabian sea—albeit at this time, an uncomfortable solution. Pakistan is beginning to understand their need to contribute in order to safeguard and preserve the sovereignty of their own nation. So how do we get the Afghan tribes to consolidate into the beneficial Common Market?

Afghanistan tribes will have to support each other through a centralized effort—of which they would and should be a key part—to join the new Common Market. The outside negotiator(s) must appeal to each tribe’ leaders inner sense of the greater, divine goodness of their ancient civilization. That is the one and only, major common denominator, the trump card that will defeat all their centuries of mutual distrust, anger and bloodshed.

The Greater Himalayan Hindu Kush Common Market is will provide the economic vehicle to stabilize the whole region. It is not an easy task, but we Americans will help do the heavy lifting. Do not be surprised with the other nations—some now called contentious nations—who will join this Common Market for mutual support and benefits.

* “How To Lie With Maps”  by Professor Mark Monmonier