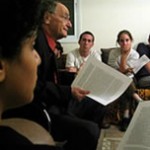 If you are a dedicated militarist in the U.S., you try to brand the truth-reality crowd as anti-American. Rightwingers in Israel have learned that lesson well, hitting the New Israel Fund for contributing $15 million annually to human rights groups in Israel who then blew the whistle on Israeli war crimes in Gaza. Joe McCarthy is alive and well and living in Israel.

–Nationalist groups accuse the New Israel Fund of seeking to undermine Israel, alleging that rights groups it has sponsored provided most of the testimony to a U.N. panel on the Gaza war–

By Edmund Sanders
Reporting from Jerusalem

A U.S.-based philanthropy that funds human rights groups in Israel is under fire amid accusations that its recipients provided the bulk of evidence to a U.N. commission that issued a report highly critical of Israel’s Gaza Strip war a year ago.

Leaders of the Washington-based New Israel Fund, whose recipients include several groups that promote Palestinian rights, said Sunday that they are being unfairly targeted by conservatives in Israel seeking to silence opposing viewpoints.

‘It’s an attempt to stifle dissent,’ said Daniel Sokatch, chief executive of the fund, which donates about $15 million annually to human rights and civil society groups in Israel. The group’s donations were the focus of a Jan. 29 report by Im Tirtzu, a self-described centrist Zionist group that alleged 92% of the material collected inside Israel by the United Nations’ Goldstone Commission originated with New Israel Fund grantees.

Last fall, the U.N. panel, headed by South African jurist Richard Goldstone, accused Israel and the Palestinian militant group Hamas of committing war crimes during Israel’s 22-day assault in Gaza, which has been under an Israeli blockade since 2007.

The Israeli offensive, launched in response to Palestinian rocket fire, killed about 1,400 Palestinians. Thirteen Israelis died during the assault.

The Israeli military has condemned the findings as biased and inaccurate.

The Goldstone report accuses the military of using disproportionate force and deliberately targeting civilians. Many Israelis fear the report has tarnished their nation’s reputation.

Im Tirtzu leaders say the New Israel Fund and its recipients were instrumental in assisting the U.N. inquiry, with which Israel refused to cooperate.

Im Tirtzu founder Erez Tadmor accused the fund of financing a ‘propagandist campaign’ aimed at ‘de-legitimizing Israel, negating its right to exist and its right to self-defense.

’In a media and advertising campaign, Im Tirtzu and its supporters labeled the New Israel Fund and the groups its supports as unpatriotic. A lawmaker is calling for an investigation.

‘In the end,’ one leading newspaper columnist wrote, ‘they serve the agenda of Iran and Hamas.’ Fund President Naomi Chazan, a former lawmaker, was depicted in newspaper ads with a horn sprouting from her forehead. The Jerusalem Post newspaper canceled her regular column.’

This atmosphere is bordering on McCarthyism,’ said Melanie Takefman, spokeswoman for the Assn. for Civil Rights in Israel.

‘There is increasing nationalism and a feeling that more and more things have become taboo.’

In the aftermath of the Goldstone report, some critics have accused Israel of attempting to crack down on foreign aid workers, journalists and charities working in the Palestinian territories or perceived as supporting Palestinian causes.

New Israel Fund officials acknowledge that some recipients cooperated with the Goldstone inquiry, but they estimated that the materials provided account for 14% of the total evidence collected, according to fund spokeswoman Naomi Paiss. She said human rights groups were just doing their jobs.

‘This is what human rights group do,’ she said, noting that the fund did not necessarily endorse their positions. ‘They are supposed to monitor and report.’