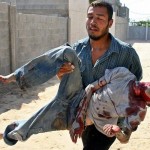 Update:  See also Glenn Greenwald’s Ugly and Reckless Anti-Semitism Games. “Even by that magazine’s lowly standards, The New Republic yesterday published an amazingly ugly, reckless, and at-times-deranged screed from its Literary Editor, Leon Wieseltier, devoting 4,300 words to accusing Andrew Sullivan of being an anti-semite, largely due to his critical (i.e., forbidden) comments about Israeli actions and American neoconservatives.  Particularly since the horrific Israeli assault, Sullivan has become more critical of Israeli actions and more dubious of uncritical U.S. support.”

One misses the days when those working for peace and standing up for war’s victims were merely pinko-commie queers. Now, they’re anti-Semites.

Over at the pages of the New Republic (TNR) is a raging debate over whether neo-con/neo-liberal/neo Andrew Sullivan is per force an anti-Semite as he directs his commentary—as he has the last few years—onto victims of Israeli militarism.

That’s a big leap for Sullivan who as recently as 2004 defended the invasion of Iraq ridiculing and slandering the war’s detractors such as Noam Chomsky. Sullivan was also a reliable ally of the militarists in Israel.

So what’s gotten into Sullivan that he would come to the defense of victims of American-Israeli militarism? If you believe the New Republic, it’s anti-Semitism.

It seems unlikely that Sullivan, an intelligent man, could hold to racist views—presumably anti-Semitism requires a belief in the myth of a Jewish raceand the euqally silly notion that races are marked by distinguishing qualities of character inclination and behavior capacities.

No, what Leon Wieseltier says  is the give-away is Sullivan “belongs to the party of Mearsheimer and the clique of Walt (whom he cites frequently and deferentially), to the herd of fearless dissidents who proclaim in all seriousness, without in any way being haunted by the history of such an idea, that Jews control Washington.”

Actually what Mearsheimer, Walt and now Sullivan apparently believe is that Christain Zionists, militaristic Zionists in America and Israel and AIPAC comprise an enormously effective lobby, and that “… the thrust of US policy in the region derives almost entirely from domestic politics, and especially the activities of the ‘Israel Lobby’. Other special-interest groups have managed to skew foreign policy, but no lobby has managed to divert it as far from what the nationalinterest would suggest, while simultaneously convincing Americans that US interests and those of the other country – in this case, Israel – are essentially identical. London Review of Books (Vol. 28 No. 6 · 23 March 2006))

That’s enough to draw the charge of anti-Semitism from American militarists like Wieseltier.

You see, before accusing someone of a historical imprecation like anti-Semite, I would have the decency to have one hell of a lot of evidence. But evidence and decency, the tools of rational analysis, escape Wieseltier when defending the indefensible; that is atrocities, death and destruction that are the favored results of all militarists of any state, creed, and religious persuasion.

For the past several decades, and especially since the Six-Day War in 1967, the centrepiece of US Middle Eastern policy has been its relationship with Israel. The combination of unwavering support for Israel and the related effort to spread ‘democracy’ throughout the region has inflamed Arab and Islamic opinion and jeopardised not only US security but that of much of the rest of the world. This situation has no equal in American political history. Why has the US been willing to set aside its own security and that of many of its allies in order to advance the interests of another state? One might assume that the bond between the two countries was based on shared strategic interests or compelling moral imperatives, but neither explanation can account for the remarkable level of material and diplomatic support that the US provides.

Instead, the thrust of US policy in the region derives almost entirely from domestic politics, and especially the activities of the ‘Israel Lobby’. Other special-interest groups have managed to skew foreign policy, but no lobby has managed to divert it as far from what the nationalinterest would suggest, while simultaneously convincing Americans that US interests and those of the other country – in this case, Israel – are essentially identical.

Since the October War in 1973, Washington has provided Israel with a level of support dwarfing that given to any other state. It has been the largest annual recipient of direct economic and military assistance since 1976, and is the largest recipient in total since World War Two, to the tune of well over $140 billion (in 2004 dollars). Israel receives about $3 billion in direct assistance each year, roughly one-fifth of the foreign aid budget, and worth about $500 a year for every Israeli. This largesseis especially striking since Israel is now a wealthy industrial state with a per capitaincome roughly equal to that of South Korea or Spain.

Other recipients get their money in quarterly installments, but Israel receives its entire appropriation at the beginning of each fiscal year and can thus earn interest on it. Most recipients of aid given for military purposes are required to spend all of it in the US, but Israel is allowed to use roughly 25 per cent of its allocation to subsidise its own defence industry. It is the only recipient that does not have to account for how the aid is spent, which makes it virtually impossible to prevent the money from being used for purposes the US opposes, such as building settlements on the West Bank. Moreover, the US has provided Israel with nearly $3 billion to develop weapons systems, and given it access to such top-drawer weaponry as Blackhawk helicopters and F-16 jets. Finally, the US gives Israel access to intelligence it denies to its Nato allies and has turned a blind eye to Israel’s acquisition of nuclear weapons.

Washington also provides Israel with consistent diplomatic support. Since 1982, the US has vetoed 32 Security Council resolutions critical of Israel, more than the total number of vetoes cast by all the other Security Council members. It blocks the efforts of Arab states to put Israel’s nuclear arsenal on the IAEA’s agenda. The US comes to the rescue in wartime and takes Israel’s side when negotiating peace. The Nixon administration protected it from the threat of Soviet intervention and resupplied it during the October War. Washington was deeply involved in the negotiations that ended that war, as well as in the lengthy ‘step-by-step’ process that followed, just as it played a key role in the negotiations that preceded and followed the 1993 Oslo Accords. In each case there was occasional friction between US and Israeli officials, but the US consistently supported the Israeli position. One American participant at Camp David in 2000 later said: ‘Far too often, we functioned . . . as Israel’s lawyer.’ Finally, the Bush administration’s ambition to transform the Middle East is at least partly aimed at improving Israel’s strategic situation. …