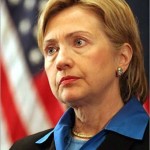 Does anyone believe that Hillary Clinton has any more commitment to democracy than Condoleezza Rice and Dick Cheney? And why doesn’t corporate news preface every mention of Iran with a brief history: ‘Iran’s democracy was overthrown by the United States in 1953 and replaced with a dictatorship, overthrown and replaced with an Islamic dictatorship in 1979?’ Well, at least Sarah Palin, Israel and the neocons are happy with Clinton’s hypocritical and ahistorical garbage.

by Glenn Greenwald — I have this nagging, intuitive sense that there are a few inconsistencies embedded in these statements — which some people in the target audience might perceive — though I can’t quite put my finger on what they are.  Perhaps someone could help locate them:

Reuters, February 15, 2010:  “The United States believes Iran’s Revolutionary Guards are driving the country toward military dictatorship and should be targeted in any new U.N. sanctions, Secretary of State Hillary Clinton said on Monday. . . . ‘We see that the government of Iran, the supreme leader, the president, the parliament, is being supplanted and that Iran is moving toward a military dictatorship,’ she said.”

Associated Press, February 14, 2010:  “U.S. Secretary of State Hillary Rodham Clinton, on a quick visit to Persian Gulf allies Qatar and Saudi Arabia, told a forum on U.S.-Muslim relations that Iran has not lived up to its nuclear obligations and has rebuffed U.S. and international efforts to engage in serious talks.”

Hillary Clinton, March 10, 2009:  “I really consider [Egyptian] President and Mrs. Mubarak to be friends of my family. So I hope to see him often here in Egypt and in the United States.”

New York Times, February 10, 2010:  “The Iraqi Army’s Fourth Division cordoned off the provincial council building here overnight on Tuesday and showed no sign on Wednesday of leaving. It was the latest in a series of actions by the government of Prime Minister Nuri Kamal al-Maliki that have infuriated his political opponents, while raising doubts about the strength of the country’s laws and democratic institutions. . . . In a dispute over the provincial council’s legal powers to appoint a governor, Mr. Maliki ordered in the military here — for the second time — to exert his influence. American military commanders and diplomats expressed alarm at his willingness to use force.”

Perhaps one hint comes from this article on Clinton’s Middle East trip by Rami Khouri, who writes about the “chuckles greeting Clinton on her tour” when she warns of the dangers of Iran’s emerging “military dictatorship” (h/t Charles Davis):

Half a century of American foreign policy flatly contradicts this sentiment (which is why Clinton heard soft chuckles and a few muffled guffaws as she spoke). The US has adored military dictatorships in the Arab world, and has long supported states dominated by the shadowy world of intelligence services. This became even more obvious after the attacks of September 11, 2001, when Washington intensified cooperation with Arab intelligence services in the fight against Al-Qaeda and other terror groups.

Washington’s closest allies in the Middle East are military and police states where men with guns rule, and where citizens are confined to shopping, buying cellular telephones, and watching soap operas on satellite television. Countries like Egypt, Jordan, Tunisia, Libya, as well as the entire Gulf region and other states are devoted first and foremost to maintaining domestic order and regime incumbency through efficient, multiple security agencies, for which they earn American friendship and cooperation. When citizens in these and other countries agitate for more democratic and human rights, the US is peculiarly inactive and quiet.

If Iran is indeed becoming a military dictatorship, this probably qualifies it for American hugs and aid rather than sanctions and threats. Clinton badly needs some more credible talking points than opposing military dictatorships. (Extra credit question for hard-core foreign policy analysts: Why is it that when Turkey slipped out of military rule into civilian democratic governance, it became more critical of the US and Israel?)

What I always find mystifying is who they think the target audience is.  I understand if they expect a domestic audience to swoon for this sort of rhetoric, but do they actually expect that there is anyone in the Middle East, anywhere, who will take seriously the righteous objections of Hilary Clinton — the American Secretary of State and close Mubarak family friend — to the rise of an oppressive military dictatorship in the Middle East?  Is anyone there really going to believe that it’s that government’s lack of respect for human rights — rather than its refusal to serve American interests and heed its various dictates — that is motivating the hostility and threats?