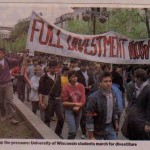 Recent pieces on the imperative for a broad-based peace movement and the impossibility of one nation, Israel, to forever ignore the opinion of mankind bring into focus the apartheid system maintained by Israel in the occupied territories.

We don’t hear much about this ongoing atrocity by Israel in the United States corporate media and even less from our Congress.

But history instructs and inspires. A scant 25 years ago, a similar outlaw nation, South Africa, maintained its apartheid regime opposed by most of humanity, save Dick Cheney, Ronald Reagan, the American GOP, and Israel. [See Jane Hunter’s book on Israel-South Africa’s close ties in the 1980s.]

Infuriated by the white, racist regime and its savage oppression of Nelson Mandela, the African National Congress (ANC) and anyone opposing apartheid, a broad-based anti-apartheid citizens’ movement sprung up in the United States, joining the rest of the world.

I remember the mid-’80s anti-apartheid movement. I rallied with 1,000s on the University of Wisconsin-Madison campus, occupied the state capitol, along with 100,000s across the nation involved in similar protests. [In the Time Magazine shot below left, the guy on the far-right holding a red book is me.] It never occurred to us, in our youth, that South Africa’s racist leaders would not fall. In our youth, we were right.

No country can forever resist a world-wide peace and justice movement. Screwing veterans is not a logical necessity. The military-industrial complex is not omnipotent. War and support for warrior states are not fated. Palestinians will see justice, with American chicken-hawks and liars being dragged along by history.

A single contribution by many is huge, and despair ain’t no option. As RFK put it in his South Africa’s Day of Affirmation Address, June 6, 1966 rife with historical irony:

For the fortunate among us, the fourth danger is comfort, the temptation to follow the easy and familiar paths of personal ambition and financial success so grandly spread before those who have the privilege of education. But that is not the road history has marked out for us. There is a Chinese curse which says ‘May he live in interesting times.’ Like it or not we live in interesting times. They are times of danger and uncertainty; but they are also more open to the creative energy of men than any other time in history. And everyone here will ultimately be judged — will ultimately judge himself — on the effort he has contributed to building a new world society and the extent to which his ideals and goals have shaped that effort.

Someone whom I greatly admire and respect in these pages told me he has “ingrained cynicism.” Forget cynicism. Victory is around the corner. Israel and the American right wing cannot oppress forever.

Peace and love will win out.

Just as it seemed certain that the oppressive apartheid regime would fall because right was on our side, so too will the bloody Israeli occupation and opression of people ultimately fall, with Israel’s capitulation to humanity. One thinks of RFK again, on the mindless menace of violence:

“When you teach a man to hate and fear his brother, when you teach that he is a lesser man because of his color or his beliefs or the policies he pursues, when you teach that those who differ from you threaten your freedom or your job or your family, then you also learn to confront others not as fellow citizens but as enemies, to be met not with cooperation but with conquest; to be subjugated and mastered.

We learn, at the last, to look at our brothers as aliens, men with whom we share a city, but not a community; men bound to us in common dwelling, but not in common effort. We learn to share only a common fear, only a common desire to retreat from each other, only a common impulse to meet disagreement with force. For all this, there are no final answers.

Yet we know what we must do. It is to achieve true justice among our fellow citizens. The question is not what programs we should seek to enact. The question is whether we can find in our own midst and in our own hearts that leadership of humane purpose that will recognize the terrible truths of our existence.”