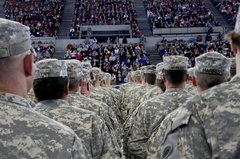 mobilization of soldiers in the 41st Brigade Combat Team, which was shortly to leave for Iraq.

As the elected leaders took their turns at the microphone, they told the soldiers that the state of Oregon appreciates their sacrifices and would work to make it easier for them and their families to deal with the effects of the deployment.

“We won’t tolerate soldiers going from the front lines to the unemployment lines,” said Sen. Wyden. “We wanted you to know we’ve got your back,” added Courtney, president of the Oregon Senate.

Now it’s 10 months later and 2,500 soldiers are about to come home. At least 800 of them, likely more, don’t have jobs. Many will face the grim necessity of losing their federal pay and needing to find work at a time when Oregon is afflicted with double-digit unemployment. Their incomes will fall off a cliff when they leave the federal pay system this spring.

Thanks for serving, troops. Welcome home.