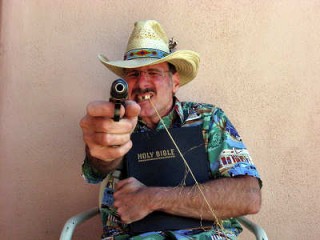 I’ve always been both amused and disturbed by gun nuts. I grew up with them. My Dad, a couple of uncles and many family friends were serious firearms freaks.

To them the autumn morning ritual of trudging across the windswept, snow covered cornfields and slogging the muddy creek beds of southern Ohio while casually dispatching rabbits on the left, pheasants to the right or squirrels lurking menacingly in the trees was rapture beyond compare.

I got my first shotgun on my tenth birthday, a Savage 410, along with a hunting jacket with game pockets and elastic ammo loops that held enough shells to make Zapata proud. A hunting license with my name on it and a Buck knife and sheath with a rawhide thong (for strapping the knife to my skinny leg) topped off this boyhood rite of passage.

I remember distinctly the feeling that I had suddenly aged, grown taller, I imagined that my voice was deeper, more commanding. I was a member of the fraternity of “men,” a hunter now; I had left the gatherers behind.

I spent hours cleaning and oiling that shotgun in anticipation of my first armed outing with the other hunters. I had tagged along on hunts with Dad and his friends for a couple of years, but never armed. The thought of wearing full battle dress, hunting jacket loaded with shells, knife on my belt and that license pinned proudly to my back was exhilarating.

That’s how I became a part of a male family tradition, the Thanksgiving morning hunt.

While the women (the gatherers) were engaged in their kitchen business we warriors were stalking the wild rolling hills of exurban Dayton for scrawny wild birds and furry rodents to add that special gamy goodness to the feast.

I loved every minute of hunting, the sights, the smells, the company of men who now accepted me as one of their number, if a fractionally sized and squeaky voiced one.

The only blemishes on my infatuation were the cold wet feet, frozen fingers and cheeks and the cold, black, glassy dead eyes of my victims.

The first time out I got two rabbits on the run and I thoroughly enjoyed shooting them, until it came time to gut and field clean them while they looked silently and accusingly on.  They felt heavy in the game pocket at the small of my small back and all through the rest of the morning were a constant reminder of my guilt, my willing complicity in their deaths.

I did not enjoy at all the knowledge that I had turned these happily cavorting little critters into the cold stiffening lumps of deadness in my jacket.

I knew from conversations with my Dad that killing animals on the hunt and eating them was really no different than buying meat in the grocery store, it wasn’t squeamishness in that sense, rather, I was saddened because I had been responsible for this minor bit of carnage.

By the end of the morning the guilt was somewhat diminished by the trip home, the warming fragrant stop in a country café for burgers and chili and greatly diminished by the sound of their laughter and the mutual retelling of the great drama and adventure we had shared.

My exploits as a first time warrior were extolled in my presence and by the time we got home to our warm kitchen filled with admiring ‘gatherers’ I was six feet tall.

I thought of that hunt this morning as I read an excellent Op-Ed by Derrick Jackson, “Want a Glock with your latte?” in the Boston Globe that reminded me of that boyhood experience.

I mention it here to establish my credentials as a former hunter and “gun person” before I launch into what some might think an uninformed tirade of anti gun, anti ‘sportsman,’ blather about my former “comrades in arms.”

As a rule I don’t go to Starbucks, I have, a couple of times, and found that they didn’t have coffee that pretended only to be coffee. Don’t get me wrong, I like coffee and I know the difference between the good stuff and the floor sweepings served up at many cafes but I find the smarmy pretension of Starbucks and the idea of being served by some snooty twenty year old ‘barista’ annoying.

I prefer the plump little old lady in the white apron at the local café. Alice’s excellent brew comes in one flavor (coffee) and one size (cup) and announces its arrival with the wonderful rich morning smell of well … coffee.

Over the years I’ve had friends and acquaintances who were on the police force or who carried guns for other work related reasons. When they carried guns openly, in plain sight it made me ill at ease, uncomfortable in their presence and I always found an excuse to be elsewhere as soon as I could make a graceful exit.

It’s not that I feared that they would shoot me, it’s because I knew that they could. The forbidding latent lethality of that cold piece of iron always brings back the memories of cold dead eyes.

Half the citizens I encounter while making my daily rounds in life may be armed, ‘packing heat’ ‘carrying a piece,’ a rod or a roscoe in their skivvies and I wouldn’t know it. Out of sight, out of mind I suppose, but as soon as those weapons are in plain sight I admit to getting a little nervous.

I can’t think of any reason why I would get up in the morning, get dressed and before I head out for coffee or breakfast, strap on a side arm. This may be normal behavior among troops in a war zone (and was for me as a young Marine) but I find it completely antisocial and alarming on the part of civilians.

Some people may do this with a degree of innocent bumpkinly naiveté, or simple minded strutting machismo but I think that most folks who strap on guns before ordering a cinnamon dolce latte or a macchiato from Chad the Barista are probably latent psychos and potentially explosive and dangerous.

Jackson makes the point in his article that we are steadily evolving into a culture with a siege mentality:

In a new book, “The Insecure American,’’ editors Catherine Besteman and Hugh Gusterson write that fear “has fueled a growing fortress mentality among the American public and the government . . . The obsessive focus on securitizing the landscape means turning American neighborhoods, schools, transportation centers, shopping malls, public spaces, and government buildings into fortresses surrounded by walls and monitored by surveillance systems.’’

If I stop into the local café and have to pinch myself because it looks like the Long Branch Saloon I’ll just turn and find another place for breakfast.

I’m in no danger I suppose, because as I said, I don’t go to Starbucks, but if you do… don’t even think about cutting in line.