[Editor’s note: In an essay that is at once profoundly troubling and uplifting Chris Hedges paints a portrait of a bleak and horrible road ahead for our country and suggests that the only way to retard or reverse what has seemingly become inevitable is to take personal responsibility and stand in front of the tanks. Bob Higgins]

There are no constraints left to halt America’s slide into a totalitarian capitalism. Electoral politics are 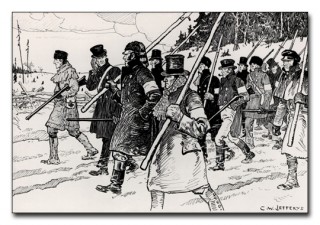 a sham. The media have been debased and defanged by corporate owners. The working class has been impoverished and is now being plunged into profound despair. The legal system has been corrupted to serve corporate interests.

Popular institutions, from labor unions to political parties, have been destroyed or emasculated by corporate power. And any form of protest, no matter how tepid, is blocked by an internal security apparatus that is starting to rival that of the East German secret police. The mounting anger and hatred, coursing through the bloodstream of the body politic, make violence and counter-violence inevitable. Brace yourself. The American empire is over. And the descent is going to be horrifying.

Those singled out as internal enemies will include people of color, immigrants, gays, intellectuals, feminists, Jews, Muslims, union leaders and those defined as “liberals.” They will be condemned as anti-American and blamed for our decline. The economic collapse, which remains mysterious and enigmatic to most Americans, will be pinned by demagogues and hatemongers on these hapless scapegoats.

And the random acts of violence, which are already leaping up around the fringes of American society, will justify harsh measures of internal control that will snuff out the final vestiges of our democracy. The corporate forces that destroyed the country will use the information systems they control to mask their culpability.

The old game of blaming the weak and the marginal, a staple of despotic regimes, will empower the dark undercurrents of sadism and violence within American society and deflect attention from the corporate vampires that have drained the blood of the country.