Tea baggers who complain about too much government intervention in our lives and fiscal responsibility missing in Congress and the Obama administration, sound like they are on the verge of a tax revolt, yet tend to focus all their ire and anger on health care reform. This of course only serves to make them appear to be as independent as Karl Rove and Rush Limbaugh from the Republican Party.

If you really were INDEPENDENTS, and seriously concerned about balancing federal budget deficits and ending government fiscal irresponsibility then how about showing just how independent you are from both the Democratic and Republican parties, bring you tea bags (or coffee if you prefer) and join Code Pink in their EQUAL SHARE OF THE AMERICAN PIE movement.

Simply put, your independent spirit would be taken serious if you targeted BOTH health care reform AND defense (really offense) spending and the military-industrial complex. Then, just maybe then, most other serious independents would find common ground with you.

That said, if you feel that being Pro-Peace is a sign of being Democrat Party, you don’t know enough about Blue Dog Democrats who really should be Republicans when it comes to WAR profiteering!!!

PROUD SUPPORTER OF AN EQUAL SHARE OF THE AMERICAN PIE!

That’s right, we know all too well that our government values war above the health of our communities. We are not just talking health care here, for most Veterans and certainly Military Families, we got ours. However, it‘s up to us to take these rotten apples and make apple pie by looking within, acting locally, and finding ways to feed our own communities with ripe opportunities for education, jobs and healthcare while we continue to urge our government to nourish our people.

The Washington, DC City Council is poised to fork over a hefty $25m bite to the war profiteers at Northrop Grumman (who, according to their own  promotional video, receives $0.65 from every $1 spent on defense!) This is corporate welfare at its most bitter! As Gloria Steinem said over a decade ago, “We can tell our values by looking at our checkbook stubs.” This is true on a personal, governmental, and a cultural level.


You can think globally/act locally and push back on DC City Council Members by sending them a special version of the postcard above! Do it today, in an act of remembrance and rage for the upcoming 7th anniversary of the war in Iraq.

After sending your no-more-war-pie-telegram, you can join Peace activists by protesting the war on the 7th anniversary, either in Washington, D.C. from March 18-20 (including an evening with Eve Ensler and Amy Goodman!) or in your own community.

Bring Money Back from War to our Neighborhoods 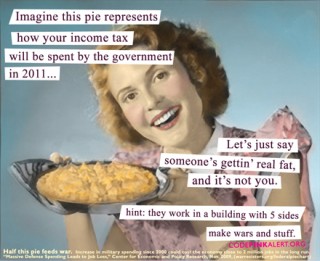 Unless of course you neighborhood profits (is a war profiteer) from wars and the military-industrial complexion, together, we can walk our talk and bring money for war back to our neighborhoods! What’s happening in DC is just the beginning!

To join a CODEPINK march near you, click here, or to search for a coalition peace event click here!

How come America has money to KILL but no money to FEED or HEAL?