Home Military A Marine Home From War And Battling Boredom

The Marines known as “America’s Battalion” were sent to Afghanistan last year as part of a contingent of 21,000 additional forces President Obama deployed in the administration’s strategy to counter the Taliban insurgency. NPR followed the 2nd Battalion, 8th Regiment over the months of 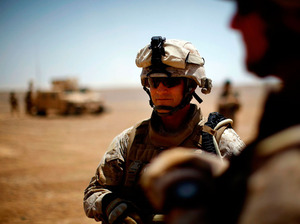 They have since returned home and are settling into post-combat life.

Barbara Breeden has been through nearly all of her husband’s 13 deployments — which have included stints in Somalia, Haiti, Bosnia, the Persian Gulf and Iraq.

His last one, in Afghanistan, was different. The conditions were more austere. The fighting was intense, and his battalion lost 14 Marines.

For Sgt. Maj. Robert Breeden’s homecoming on Thanksgiving, Barbara thought about filling their house, near Camp Lejeune, N.C., with family. But she didn’t know how he would be when he got back. So she kept extended family away.

Then she made sure her daughter, Rebecca, understood that things would be a little different when her father returned.

“We just talked about the fact that we can’t surprise him,” she says, “and we had to remember, when we were out, loud noises were probably going to freak him out a little bit.”

When the battalion returned from Afghanistan, Marine counselors asked the families to monitor the men for signs of stress. Barbara is watching — but she is watching a man with more than 20 years in the Marine Corps, so it has been hard to read the signs and know what they mean.

Sgt. Maj. Breeden is uncomfortable in crowds. But what does Barbara make of the fact that for a few days he drove slower than usual?

“I did drive slow,” Robert says, “because you don’t, you can’t drive fast over there.”

Read more and listen to the broadcast at NPR