A recent Bloomberg National Poll confirmed what was already apparent, that the Tea Party movement has an intense hatred for anything they, or their leaders, deem to be socialist while both appreciating and wanting more government support for programs they like and, of course, not really understanding what the term socialist 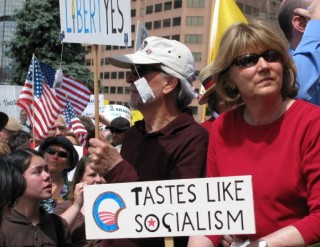 means. The Tea Party movement has a long, if perhaps not so distinguished pedigree, as fear of socialism has been a tool by powerful economic forces in the US for more than a century used to oppose any policies which might help poor and working people.

For over a hundred years the US has been characterized by a consensus dread of socialism while continuing to enact enormously popular policies that are essentially social democratic in nature. Health care reform is only the most recent example of this type of legislation which also includes Social Security, veterans benefits, Medicare, head start, food stamps which have become particularly popular in this economic downturn, and various other programs, subsidies and tax incentives.

In recent decades socialism, even among many of its advocates, has evolved into social democracy which seeks to take the edges off of the injuries of capitalism without substantially changing the system itself. Most of the industrialized world, including the US, learned in the first half of the last century that the only way to sustain capitalism was to rein it in somehow through providing support and protection for citizens. The social programs that were enacted in the US during the 1930s, as well as those in subsequent decades have always been quite popular.

Americans, like Europeans and others, appreciate government safety nets, public projects and other benefits. The primary difference is that in the US, we have become very comfortable with elements of social democracy, although we still have far fewer of these than most wealthy industrialized countries, while we remain virulently opposed to the word “socialism” or even the phrase “social democracy.”