AMERICA MUST SWALLOW ITS EGO; LET THE WISDOM PREVAIL

General McChrystal, having read ’s Memoirs, has opted for the new strategy for Afghanistan, named as ‘Churchill’s Choice’, defined in these words:

“The more an outside army sought to impose order, the more ferocious the Afghan response. Brute force of arms, was not only insufficient and ineffective, but likely to foment greater antagonism. Therefore, there was the option of pulling-out and working through and with the tribal system, and leaving the tribals to their blood letting.”

The new strategy, therefore was formalized during the Strategic Dialogue with Pakistan, with high expectations that the Pakistan Army, having ‘Steam-rolled’ the Taliban from North Waziristan, will be ready to support the surge against the Taliban, but on his return to Pakistan, General Kiyani has poured cold water on their hopes, by saying “Pakistan has no intention to launch ‘steam-roller operations’ in North Waziristan, nor it can provide any military support to the coalition forces surge inside Afghanistan.” So the hope for ‘brick-by-brick demolition of jehadi infrastructure’ is dashed to the ground, as much as the effort to capture Marjeh in the Helmand province, and the hoisting of the American flag on a mud-hut of Marjeh bazaar. The surge will now turn towards Kandahar, inviting a befitting response from the Taliban. This encounter, certainly, will not be a stalemate, as in Marjeh, but a turning point of the surge operations.

There certainly is no possibility of a quick-fix military success, to be presented to the nation before the mid-term elections, nor the option of “pulling-out and leaving the tribals, to their blood-letting”, by implementing the Maldives Plan. In fact the Maldives Plan would be the recipe for disaster. This option was used in 1990, after the Afghan Mujahideen and the government of Pakistan together provided the safe exit to the Soviet troops but for the exit of the occupation forces now, neither Pakistan nor Taliban can provide any such guarantee.

Obama’s dash to Kabul to announce the pre-mature success of the Strategic Dialogue, was a crude attempt to fool the American public, because the ‘surge strategy’ has failed and so has the Maldives Plan before it could be launched. What then is the option? The answer is “find peace with the Taliban of Afghanistan”, which is possible, if the occupation forces try to understand the genesis of Taliban of today and the way forward to negotiate peace with them. The Taliban of today are very much different from the Taliban of 1988-89. The Taliban of today are what the CIA website, ‘The Long War Journal’ describes in detail. Add to it the ‘hard core of young Taliban’, born during the last thirty years, under the shadows of war, who know nothing but to fight, for their freedom. They have seen no pleasures of life – la courtesy foreign invasions, by the Soviets and the Americans. They live in a state of anomie, where life and death have little meaning for them. Two super powers and the pride of Europe, the NATO forces stand humbled by them. They are a phenomenon, least understood, yet one can understand them, if there is the willingness to engage with them.

How to engage with them is the real problem. Because of the obsessions to call them “terrorists”, there is a hesitance to talk to them. One has to get rid of this obsession and treat them as ‘freedom fighters’, who, during the last three decades have sacrificed their two generations in order to “preserve their freedom, their values and traditions, which do not find harmony with the American plans and policies for Afghanistan.” Mulla Umar

There exists a serious trust deficit between the Taliban and USA, who betrayed them in 1989 at Geneva and again in 2001 at Bonn, by denying them power-sharing which they deserved as the winner and also being the majority, i.e. 55% of the population. The Maldives Plans which has now been hatched and is to be implemented, will be another betrayal and a disaster for peace.

Pakistan and the other stake-holders do not want a Talibanised Afghanistan. They have no right under any law to make such a demand. It is, for the people of Afghanistan to choose the form of government best suits them. Amongst our immediate neighbours, China follows the Communist/Socialist ideology and is the most peaceful country in the world. Iran follows the Islamic Ideology and despite such provocations from Israel and pressures from USA, has maintained its cool. Similarly, Afghanistan under the Taliban will follow the Islamic ideology, respecting the rule of law and distributive justice. In fact, the world has to remain engaged with them to ameliorate their sufferings of the last thirty years, caused by foreign aggressions. Pakistan and the USA, in particular therefore have “to recalibrate their positions and harmonize their interests with Afghanistan for a lasting peace in the region.”

It is not Karzai and his government, which will look after the American interests when they are gone from Afghanistan. The Taliban can provide such a guarantee, if we remain engaged with them to create mutual confidence and the promise to invest in rebuilding the country which has suffered untold misery, death, destruction and deprivation, at the hands of the two great powers – Russia and America. They owe to the people of Afghanistan, not in blood, or flesh, any more, but in kind, if they decide to save the day and abandon the Churchill’s Choice of “leaving the tribes, to their blood letting.

General Mirza Aslam Beg is the former Chief of Army Staff, Pakistan. After retirement, he established his Think Tank, 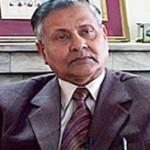 ‘FRIENDS’ at Rawalpindi. He holds independent views that are widely respected and given serious thought. He contributes his articles regularly to www.opinion-maker.org