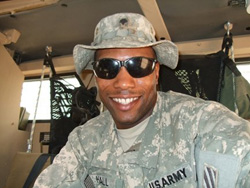 This is a follow-up on three earlier stories posted back on 5 & 6 Feb 2010 about the U.S. Armies actions to deploy a Stop Lossed military member to Iraq to face court martial out of the public eye.

Army plans to Extradite Stop Loss Rapper away from Public Scrutiny,  Stop the Extradition of Specialist Marc Hall to Iraq! AND Army Jails Soldier for Singing Against Stop-Loss Policy.

Several concerns were expressed by Veterans Today about this attempt of hide a high profile case away from public scrutiny. The appropriateness of this angry response to the Pentagon’s unsavory practice of Stop Loss is debatable, and we do not condone Specialist Ron Hall’s actions. If he wanted to practice his freedom of musical expression he could have done so once he left the Army. Once you volunteer for military service any right to freedom of expression is forfeited.  Most of us who have served a career know this is a truism along with losing quite a few freedoms reserved for the majority of citizens we serve to protect and defend.

What should still concern all of us is the issue of Stop Loss like so many other issues related to the never ending deployments to Afghanistan and occupation of Iraq. When Iraq Veterans Against the War (IVAW) sent us a media release on how the U.S. military planed to ship a Stop-Lossed Iraq War Vet to Iraq for Court Martial over his rap song protesting Stop Loss, the Obama administration came into office promising to curtail then cease the disdainful policy of Stop Loss, but that still remains to be seen given Obama’s SURGE into Afghanistan.

We at Veterans Today also expressed concern that regardless if our readers agreed with what the Pentagon did or not, then what next sending American Soldiers to the United Nations to find other countries to court martial our troops outside the borders of the United States so the Pentagon is not publicly embarrassed to the nation our military supposedly serves to protect?

This rings of the same kind of Pentagon, Congressional, and White House JUSTICE than gave American a shameful black eye and legacy called Gitmo.

The Obama administration should be more ashamed of itself than the Bush administration. Don’t care if you are Green Party, Constitutional Party, Tea Bag Party, Independent Party, Libertarian Party, what was once the Democratic party or Republican party, heck even Communist and Socialist parties – this was not about political ideology it was and is about JUSTICE.

During the weekend of 17-18 April 2010, Iraq Veterans Against the War (IVAW) learned that the Army had dropped all charges against Specialist Marc Hall, and Marc had been released from confinement in Kuwait.

IVAW’s efforts along with Courage to Resist and the pressure of supporters like readers of Veterans Today successfully forced the Army’s hand.

Marc had this to say via phone from Camp Arifjan, Kuwait:

“I’m out of the confinement facility! Thank you to everyone for all the efforts everyone made. Hopefully I’ll be home very, very soon. I appreciate all of the love and support so many people gave me through my ordeal.”

Marc had been detained for over 5 months and was recently shipped to Kuwait to face court martial over a song he recorded criticizing the Army’s Stop Loss policy of involuntary extensions.  He was due to be Stop-Lossed after already serving a tour of duty in Iraq.

Public pressure and donations to Marc’s legal fund allowed his legal and support team to prepare an effective defense. After the Army learned that his civilian lawyer, David Gespass, had been approved for a visa to travel to Kuwait, they gave in.  (Gespass serves as the President of the National Lawyers Guild.)

Hall will receive a general discharge under other than honorable conditions, which will prohibit him from receiving any military benefits.  But Gespass is working to get his discharge upgraded.  For now, Marc is just happy to be free and out of the military.

Read here for a detailed report on Hall’s case and its outcome.

In a media statement by Courage to Resist, the organization that supports troops who refuse to deploy to Iraq or Afghanistan, quoting Truthout reporter Dahr Jamail in his article Soldier jailed for rap lyrics Is discharged. April 18, 2010

Until April 17, US Army Spc. Marc Hall sat in a military brig at Camp Arifjan, Kuwait, facing an imminent court-martial for challenging the US military’s stop-loss policy in a song. Spc. Hall was granted a discharge by the military in mid April 2010.

On December 17, 2009, Hall was jailed for writing a song about the personal impact of being forced to remain in the military beyond the scope of his contract by the stop-loss policy.

Stop-loss is a practice that allows the Army to keep soldiers active beyond the end of their signed contracts. According to the Pentagon, more than 120,000 soldiers have been affected by stop-loss since 2001, and currently 13,000 soldiers are serving under stop-loss orders, despite public pledges by President Barack Obama to phase out the policy. Hall’s song included lyrics the Army claimed were veiled threats of violence.