Sarah Palin appeared on Fox News and straightened out the record: No racial profiling in Arizona after-all. Sure, if you look brown and have no papers, you land in jail. The Fourth Amendment, the 14 Amendment, these rights are for wusses. From Huffington:

Sarah Palin called Arizona’s controversial new immigration bill a “reasonable…wake up call” Tuesday, and criticized President Obama for “perpetuating this myth that racial profiling is a part of this law.”

In an interview with Fox News’s Sean Hannity — who introduced the segment by accusing “pro-illegal immigration” protesters of not actually reading the legislation — Sarah Palin said “there is no ability or opportunity in there for the racial profiling” in the law.

Critics have argued that the broader powers of law enforcement officials to stop and question suspected illegals who would, with this legislation, be considered to be “breaking the law” if they are in the state, will inevitably lead to racial profiling.

Palin, however, denied these claims.

“Shame on the lamestream media again for turning this into something that it is not,” Palin insisted. “Governor Jan Brewer did what she had to do as the CEO of that state to help protect the citizens of her state she had to do what the federal government has refused to do and that is help secure the borders.” 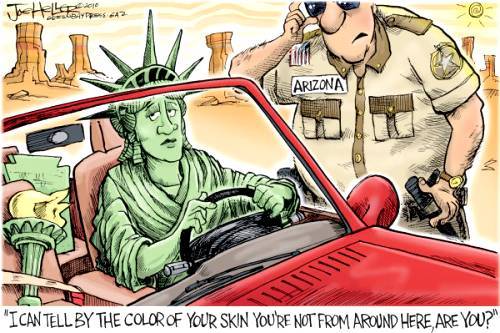