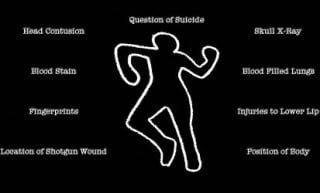 Two former West Coast Marine veterans team-up to write a poem on the murder of a Marine Corps Colonel.(SALEM, OR) – It’s hard for me to picture two hardnosed Marine veterans as poets.

My limited contact with poetry was in college at Temple University in the 1970s. I managed to squeeze by an English poetry course with a gentlemen “C.”

With these credentials, I’m not exactly a poetry expert, but you have to be impressed with the efforts made by Tim King and Luke Easter, two Marine veterans, to honor the memory of Colonel James E. Sabow, USMC, former Assistant Chief of Staff, Marine Corps Air Station, El Toro, California.

Tim King, Salem-News photojournalist/reporter and war correspondent and Luke Easter, poet, teamed up this April to write a poem honoring the memory of a murdered Marine Corps officer. Both men served in the Marine Corps; neither knew Colonel Sabow.

Tim King wrote in a May 3rd Salem-News story that “the tragic story of Marine Colonel James Sabow involves infuriating tragedy, silent yet overwhelming evidence, and immense, growing dedication. His death 19 years ago ridiculously deemed a suicide, was a Murder.”

Luke Easter, a man with a obvious talent for poetry, wrote that, “I feel poetry takes an edge off the hurt of bad news while still delivering it but in a, “glitzy” sort of way. Giving a different perspective. Kind of like slap in the face as opposed to a knife in the back. At least with the slap you’ll live to see another day and you will know whom it’s from.”

Colonel Sabow was found dead in his quarters by his wife on January 19, 1991. The circumstances surrounding his death and the forensic evidence from the crime scene complied by many experts over the years support murder.

At best, Colonel Sabow can be accused of being naïve in telling senior Marine Corps officers of his preference for a courts martial to “tell his story” rather than accept an early retirement for some ridiculous petty violation of the rules.

It was obvious to him that the Marine Corps wanted him out to avoid the disclosure of a major embarrassment involving the shipment of drugs into the U.S. on former military aircraft. His unfailing trust in the esprit de corps cost him his life. He forgot there’s no honor among thieves.

In his case, his naiveté cost him his life and almost that of his wife who was not a home having left for early morning Mass on a weekday. The shotgun staged to feign suicide had one shell left in the chamber.

The motive for the murder was to prevent Colonel Sabow from blowing the whistle at a courts martial about guns for drugs shipments into Marine Corps Air Station El Toro on former military aircraft.

Robert “Tosh” Plumlee, a former CIA pilot, provided Congressional testimony describing the use of C-130 aircraft to fly guns to Central America and drugs to El Toro and other military bases.

This story has a number of twists and involves the CIA, NCIS, cocaine, Ollie North, the Contras and high level government officials.

Anyone doing a search on Google of Colonel James Sabow, USMC, will hit on a number of news stories covering the Colonel’s death and the links to shipment of guns for drugs to support the Contra War in Nicaragua.

Despite the overwhelming evidence, the Navy, the Defense Department, and the Justice Department deny any conspiracy and murder, continuing to support suicide as the cause of death.

The official verdict by the government is the Colonel committed suicide when faced with the prospect of a forced early retirement. Hard to believe this line given the Colonel’s combat history in Vietnam where he faced death many time, his strong Catholic faith prohibiting suicide, and his close family ties.

After repeated requests for a thorough investigation by the Dr. David Sabow, the Justice Department even passed jurisdiction to Orange County, California, even though Colonel Sabow was found death on a U.S. military base.

Mike Jacobs, former Supervisor of the Homicide Trials Division in the Orange County District Attorney’s Office said, “Colonel Sabow’s death could not have been suicide but have to been a homicide inflicted by the hands of another.”

Where I grew up in Philadelphia, anyone in my neighborhood in hearing this story would instantly come with “the fix is in.”

There’s no statute of limitation on murder. Given the passage of time, this is a cold case. However, most of the hard ground work has been done by Dr. Sabow who has reams of documentation from multiple experts supporting murder of his brother.

Did the Justice Department pressured the Orange County DA to ignore the evidence and look the other way?

After reading the “Ode to Colonel Sabow,” the first thought that came to mind was “this would make a great county western song.” Willie Nelson or Tim McGraw, where are you?

Murder is without a doubt a very extreme, coldhearted, cowardly deed,
So, it usually deals with jealously, selfishness, immorality and/or greed,
Here’s a death planned by criminal masterminds of the highest degree,
That of Colonel James Sabow, an Assistant Chief Staff in the “USMC.”

General David Shuter stated at his eulogy a man, “without compromise,”
Oh, no doubt it made the good colonel expendable in the enemy’s eyes,
However, what makes this chilling assignation is that stunning surprise,
“Straightest of Straight Arrows,” was claimed to have committed suicide.

Forensic evidence supports murder of this brave officer in the year 1991,
Marine Corps Air Station in El Toro, Ca., when an investigation was done,
OK, but done by whom because solid clues point to a suspicious demise,
Done in sunny California, autopsy’s tough with sunglasses over your eyes.

Really? There is proof of cocaine being smuggled on former military ships?
Support the Nicaragua Contra-War? You know what’s said about loose lips,
Orange County Coroner ruled suicide before an investigation was complete,
A chilly January 22 in his quarters on a Marine Corps base, nice and neat.

Many subsequent independent experts have concluded, assured foul play,
The U.S. Navy & DOD continue to stand firm on, No!” it didn’t occur that way,
Dr. David Sabow, a South Dakota neurologist has carried this fight 20 years,
Not quite but it will be for he has no thought of quitting to remove the smear.

And restore the good colonel’s honor rightly deserved & patriotically earned,
Dollars in legal fees, private investigators, own time, energy, truth to be learned,
Ha, no matter that our own government vehemently resists him at every turn,
Eagles on a highly decorated Marine’s lapel will not allow him to crash & burn.

Hard to imagine weapons & drug-smuggling activities at a U.S. military base,
But not hard to imagine the calculated demise of a hero officer to save face,
Many glowing “fitness reports” even by general’s during his almost 30 years,
221 combat missions, 15 Air Medals, Bronze Star w/a Combat “V” & no fear.

The biggest question, why in the hell would this proud father two take his life?
Leave without rhyme, reason and comforting answers to Sally his loving wife,
James never turned down an assignment, Ooh-Rah Brave Colonel, Semper-Fi,
For the pride and decency of your country and morals, Sabow you had to die.

How many crooked hands high above yours were immersed in the illegal pie,
Could be alive today officer, “I know, I know, but Jim, it would only be one lie,”
Say that again, “one lie is all it takes to destroy 29 years of hard earned work,”
“Yeah that’s true however, it was only you and your family who have been hurt.”

Personally, I’m surprised at the incompetence and excuses of the Navy’s NCIC,
Obviously they only do good police work with Mark Harmon @ 8 P.M. on my TV,
A battle only temporarily lost because the war of Armageddon will soon be done,
Besides, who has the right to question the Father why He called home His son.

Rest assured beyond are deepest thought the Creator has many, many reasons,
Some are here only to assist heaven’s kingdom growth, in very limited seasons,
Although there is an abundance of earthly leaders we still only have one real King,
I heard God say, “Colonel, it’s just for you to pilot, My fastest bolt of lightning.”