For animal lovers, one of the most heartbreaking aspects of the Gulf spill is the oil-drenched wildlife washing up on shore. If you’re too horrified to look at any photos, you’re in luck — BP doesn’t want you to see them. 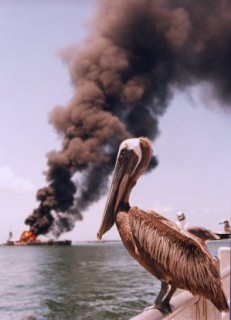 As of Friday morning, the U.S. Fish and Wildlife Service’s tally of dead animals collected in the Gulf area was 527 birds, 235 sea turtles (six to nine times the average rate), and 30 mammals, including dolphins. Yesterday morning, the spill washed over Queen Bess Island (called “Bird Island” by locals), which is a habitat for Louisiana brown pelicans, the state bird that was once an endangered species. Forty-one of the birds were coated with oil, and that number is expected to rise.

Have you seen the terrible pictures of all this carnage? Neither have I. And neither has anyone else.

Wonder why? The New York Daily News reported on Wednesday that BP has ordered its contractors not to share pictures or otherwise publicize the scores of dead and injured wildlife.

An unnamed BP contractor gave a reporter a very different tour from the one presented to President Obama during his recent visit. Among the “highlights,” if that’s what they can be called, was a decomposing dolphin that the worker said had been found filled with oil. The shoreline grass of Queen Bess Island was covered with stricken marine life, some dead and some struggling to breathe. The normally white heads of pelicans were dark with oil.