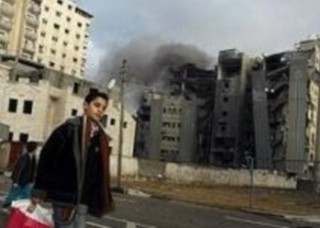 It’s a red herring of monstrous proportions, made more pernicious by the brutal effects of the blockade it supports. It’s dishonest because people around the world are not outraged by the idea of Israel keeping weapons out of the hands of Hamas. The entire world (perhaps aside from the United States and Israel) is appalled by the gradual strangulation of the people of Gaza — young and old, innocent and guilty– under an intentional man-made humanitarian crisis.

It’s imperative that people of good conscience not let Israel’s defenders get away with this bait-and switch. Israel’s “right to defend itself” has nothing to do with the moral outrage caused by the blockade. But it is nonetheless becoming the center of the debate.

In order to keep the focus on the real issue, here are 7 questions for those who continue to claim that the siege is all about Israel’s security. If you encounter such an argument, just concede the point that Israel has every right in the world to check incoming containers for weapons, at least for the sake of argument, and then launch right into these Columbo-style. They’re impossible to answer. (Unless otherwise noted, this is the source for the following info).

Impossible-to-Answer Question 1) What’s the connection between a hungry Palestinian population and keeping weapons out of the hands of Hamas? I know Israel says it’s letting in enough food in to prevent a humanitarian crisis, but UN officials have called the situation “grim”, “deteriorating” and a “medieval siege.” A bare minimum of 400 truckloads of goods needs to enter Gaza per week, and an average of 171 get in. According to the World Health Organization, 1 in 10 Gazans suffer from “chronic malnutrition,” and the UN says 6 in 10 Gaza households are “food insecure.”