Long-time White House correspondent Helen Thomas was right to apologize for a stupid remark she made about Israeli Jews leaving Palestine, but another ugly part of this incident was how her “mainstream” colleagues quickly turned on this 89-year-old icon.

Washington Post media writer Howard Kurtz penned a retrospective on Thomas’s apology and sudden retirement from journalism, giving Thomas’s critics a free shot at denouncing her for a supposed lack of “objectivity,” a principle that has been as absent in the modern Washington press 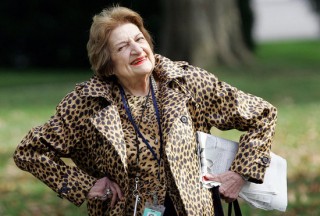 corps as frugality and common sense on Wall Street.

The simple truth is that the media’s acceptable bias on the Middle East is almost entirely in the opposite direction. Thomas, who is of Lebanese descent, has been one of the few Washington journalists who dared criticize Israeli mistreatment of Muslims in Palestine, Lebanon and elsewhere – and who views Arabs as people deserving of respect and human rights.

The dominant Washington media view, as articulated by the Washington Post’s neoconservative editorial section, has been that Israel is always right, except for some possible tactical misjudgments, and that Muslim organizations and nations that oppose Israel are “terrorists.”

In recent years, Israel’s disproportionate retaliation against people in Gaza, the West Bank and Lebanon has been defended as a proper response to Arab aggression. Israel’s own history of using terrorism, invading its neighbors and hiding a nuclear weapons arsenal is left outside the media frame.

The Washington press corps also has clambered eagerly onboard the bandwagon for U.S. military invasions of Muslim nations. When President George W. Bush was justifying an unprovoked attack on Iraq in 2002-03, the New York Times and other big news outlets happily took their seats next to the neocons driving for war.