Home Government Citizens Against Reckless Middle-Class Abuse (CARMA)
BENEATH THE SPIN • ERIC L. WATTREE
Citizens Against Reckless Middle-Class Abuse (CARMA)
It’s Time to Fight Back
It is time for poor and Middle-class workers to start fighting back. The corporate community has become increasingly prone to take shortcuts on safety, create hostile work environments, undercutting and even stealing wages from gainfully employed workers in the name of grossly obscene profits.
* 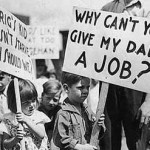 These unconscionable practices in the name of ever more profits are not only having a negative impact on the quality of life of the poor and middle-class, but often, literally, sacrifice their very lives, as we’ve seen in an increasing number of cases, as in the coal mine disaster in Kentucky that took the lives of 29 coal miners, and the oil rig explosion in the Gulf of Mexico less than a month later, that took the lives of 11 oil workers.  Both of these “accidents” were avoidable, and due to reckless penny-pinching by the corporations.

What we once thought of as American corporations have now become international in scope. They have no loyalty to any one nation, nor do they have any respect for any geographical boundary. They’re now competing with countries that pay their workers less per week than many American workers spend on lunch per day. As a result, the American middle-class standard of living has become a liability and is under an aggressive assault by both the corporate and governmental establishment.

Something has to be done, so in response to this attack on our quality of life I’ve recently become associated with three gentlemen who share my belief that it is essential that the middle-class beat back this assault by every means at our disposal. These gentlemen include the following:

We’ve come together to establish a non-partisan organization called CARMA (Citizens Against Reckless Middle-Class Abuse). We’re currently in the process of developing a database to increase our numbers. We intend to consolidate and flex the political clout of poor and middle-class workers in a way that will be impossible for politicians, unions, and the corporate media to ignore. We also intend to use our clout to address the reckless assault on the poor and middle-class through both political action, and in the courts.

We intend to take no prisoners, nor give any group a pass based on political concerns, be they corporations, unions, or politicians. So we urge every American worker to become part of this important effort to defend poor and middle-class workers. If maintaining or enhancing your standard of living is important to you, please contact the e-mail address below and become a part of our database. If you’re already a part of our database, please distribute this message to your family, friends, and neighbors.
We don’t need one voice speaking for millions; we need millions speaking with one voice.
Eric L. Wattree
wattree.blogspot.com
[email protected]