AL-ARAKIB, ISRAEL — On July 26, Israeli police demolished 45 buildings in the unrecognized Bedouin village of al-Arakib, razing the entire village to the ground to make way for a Jewish National Fund forest.

The destruction was part of a larger project to force the Bedouin community of the Negev away from their ancestral lands and into seven Indian reservation-style communities the Israeli government has constructed for them.

The land will then be open for Jewish settlers, including young couples in the army and those who may someday be evacuated from the West Bank after a peace treaty is signed.

For now, the Israeli government intends to uproot as many villages as possible and erase them from the map by establishing “facts on the ground” in the form of JNF forests.

One of the most troubling aspects of the destruction of al-Arakib was a report by CNN that the hundreds of Israeli riot police who stormed the village were accompanied by “busloads of cheering civilians.” Who were these civilians and why didn’t CNN or any outlet investigate further?

I traveled to al-Arakib yesterday with a delegation from Ta’ayush, an Israeli group that promotes a joint Arab-Jewish struggle against the occupation. The activists spent the day preparing games and activities for the village’s traumatized children, helping the villagers replace their uprooted olive groves, and assisting in the reconstruction of their demolished homes.

In a massive makeshift tent where many of al-Arakib’s residents now sleep, I interviewed village leaders about the identity of the cheering civilians. Each one confirmed the presence of the civilians, describing how they celebrated the demolitions.

As I compiled details, the story grew increasingly horrific. After interviewing more than a half dozen elders of the village, I was able to finally identify the civilians in question. What I discovered was more disturbing than I had imagined.

Arab Negev News publisher Ata Abu Madyam supplied me with a series of photos he took of the civilians in action.

They depicted Israeli high school students who appeared to have volunteered as members of the Israeli police civilian guard (I am working on identifying some participants by name). Prior to the demolitions, the student volunteers were sent into the villagers’ homes to extract their furniture and belongings.

A number of villagers including Madyam told me the volunteers smashed windows and mirrors in their homes and defaced family photographs with crude drawings. Then they lounged around on the furniture of al-Arakib residents in plain site of the owners. Finally, according to Matyam, the volunteers celebrated while bulldozers destroyed the homes.

“What we learned from the summer camp of destruction,” Madyam remarked, “is that Israeli youth are not being educated on democracy, they are being raised on racism.” (The cover of the latest issue of Madyam’s Arab Negev News features a photo of Palestinians being expelled to Jordan in 1948 juxtaposed with a photo of a family fleeing al-Arakib last week. The headline reads, “Nakba 2010.”)

The Israeli civilian guard, which incorporates 70,000 citizens including youth as young as 15 (about 15% of Israeli police volunteers are teenagers), is one of many programs designed to incorporate Israeli children into the state’s military apparatus.

It is not hard to imagine what lessons the high school students who participated in the leveling of al-Arakib took from their experience, nor is it especially difficult to predict what sort of citizens they will become once they reach adulthood.

Not only are they being indoctrinated to swear blind allegiance to the military, they are learning to treat the Arab outclass as less than human. The volunteers’ behavior toward Bedouins, who are citizens of Israel and serve loyally in Israeli army combat units despite widespread racism, was strikingly reminiscent of the behavior of settler youth in Hebron who pelt Palestinian shopkeepers in the old city with eggs, rocks and human waste.

If there is a distinction between the two cases, it is that the Hebron settlers act as vigilantes while the teenagers of Israeli civilian guard vandalize Arab property as agents of the state.

The spectacle of Israeli youth helping destroy al-Arakib helps explain why 56% of Jewish Israeli high school students do not believe Arabs should be allowed to serve in the Knesset – why the next generation wants apartheid. Indeed, the widespread indoctrination of Israeli youth by the military apparatus is a central factor in Israel’s authoritarian trend.

It would be difficult for any adolescent boy to escape from an experience like al-Arakib, where adults in heroic warrior garb encourage him to participate in and gloat over acts of massive destruction, with even a trace of democratic values.

As for the present condition of Israeli democracy, it is essential to consider the way in which the state pits its own citizens against one another, enlisting the Jewish majority as conquerers while targeting the Arab others as, in the words of Zionist founding father Chaim Weizmann,“obstacles that had to be cleared on a difficult path.”

Historically, only failing states have encouraged such corrosive dynamics to take hold.

That is why the scenes from al-Arakib, from the demolished homes to the uprooted gardens to the grinning teens who joined the mayhem, can be viewed as much more than the destruction of a village.

They are snapshots of the phenomenon that is laying Israeli society as a whole to waste. 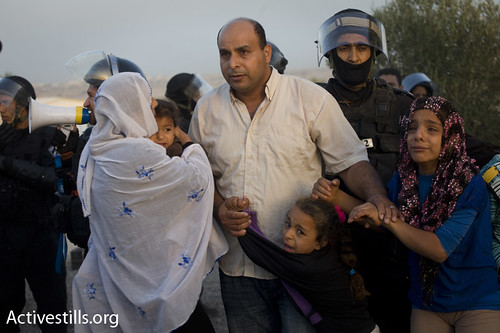 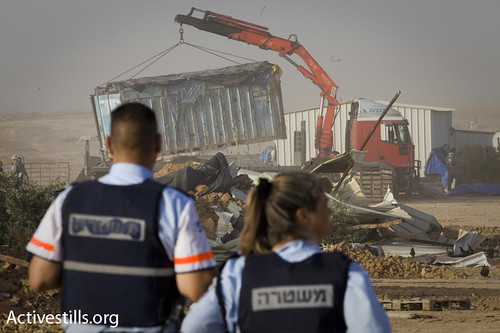 …and the destruction begins