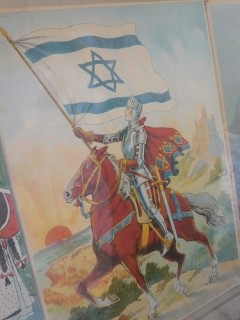 The phony intelligence used to induce our March 2003 invasion of Iraq has been dusted off. This time it’s being deployed to take us into Iran.

Except that this time around their deception lacks the broader context required to gain traction for their phony content. That key difference makes today’s perpetrators far more transparent—for those willing to look.

Those foisting on us this latest fraud also face another challenge: Americans now realize it was Israel and its advocates who fixed that false intelligence around a Zionist agenda.

Each week brings new insights that undermine generally accepted truths about 911 and our response to that mass murder on U.S. soil. As the costs continue to rise in both blood and treasure, the credibility of those who sold us this “Clash” continues its steady decline.

In March 2002, Israeli-American Jeffrey Goldberg published in The New Yorker a story alleging an alliance between the jihadists of Al Qaeda and the secular Baathists of Iraq. Though an impossible premise, his account made it appear plausible.

His collaborator was James Woolsey, a former Director of the CIA and an avid Zionist. Woolsey assured us that Iraqi intelligence officials met in Prague with Al Qaeda.

Woolsey’s intelligence was “sexed up” to sound credible. Now we know it was false. All of it.

In the consistency and common source of this duplicity lies the perilous future of Israel and its fast-shrinking legitimacy as a nation state.

The fast-growing worldwide revulsion at all things Israeli suggests that this latest fraud may yet fail—though not for lack of trying.

Goldberg is back with another round of “reporting” in the best Goebbels tradition. Woolsey helped hyped his 2002 New Yorker essay, calling it a  “blockbuster.” That it was.

New York Times“reporter” Judith Miller featured as facts Chalabi’s fabrications about Iraqi WMD. Meanwhile, Perle took over as chair of the Pentagon’s Defense Policy Board in 2001—on which Woolsey and Gingrich served. None dare call this treason—yet.

Goldberg is now making the Evil Doer case for Iran. Writing in the September 2010  issue of The Atlantic, he argues the Israeli case for bombing Iran and urges that the U.S. again join the fray.

Woolsey, Gingrich and Perle are pushing the same agenda from the periphery. Senators John McCain and Joe Lieberman, among Chalabi’s earliest Congressional supporters, are again vocal in their support of expanding the war.

If the U.S. had an honest media, Goldberg would be revealed as a fraud and his cohorts reviled as traitors. Instead he was interviewed on MSNBC by Andrea Mitchell, wife of Alan Greenspan, and lionized by CNN anchor Wolf Blitzer who served 17 years with The Jerusalem Post.

The November 2007 National Intelligence Estimate confirmed with high confidence that Tehran halted its nuclear weapons program in the fall of 2003. No credible evidence has been offered that Tehran intends to enrich uranium beyond what is required for fuel and medical applications.

In a step scheduled for August 21, Russia will assist Iran in shifting 64 tons of low-enriched uranium from a storage site to the reactor chamber as the first of three steps in the long-delayed start-up of Iran’s nuclear reactor at Bushehr.

If all goes according to plan, Iran’s reactor will begin generating electricity in three to four months. As a condition of completing and fueling the plant, Russia insists that Iran return spent fuel so that the plutonium cannot be extracted for use in developing atomic weapons.

To date, the Iranians have produced only 5,300 pounds of low-enriched uranium. Moscow sees this next step as essential to bringing Tehran’s nuclear activities under the auspices of the International Atomic Energy Agency.

What’s the Israeli strategy for IAEA compliance? Bomb Iran. What’s the U.S. strategy? Follow the lead of our faithful and reliable ally.

Tel Aviv portrays the Iranian reactor as an “existential threat” and a sure sign of a pending Holocaust. How Likud Party leaders divine that outcome remains obscure. But never mind that minor detail, mainstream American media can fill in the “never again” blanks.

It was during just such a development stage of an Iraqi nuclear facility that Israel attacked and destroyed a nuclear plant at Osirak as it neared completion in June 1981.

Thus the concern that Tel Aviv may attack the Bushehr facility before the reactor rods are lowered into the reactor core. Any attack after the chain reaction begins is certain to release radiation into the atmosphere.

The Perils of Pending Transparency

Other key factors are also driving Israel in this direction, including the need for a diversion.

Tel Aviv is now implicated in the 2005 assassination of former Lebanese Prime Minister Rafik Hariri. The massive bomb blast left a crater 10 feet deep and 50 feet across. To date, Syria has been blamed for Hariri’s murder, along with Hezbollah.

The ensuing instability was cited by Israel as a rationale for its 2006 invasion of Lebanon with the U.S.—per usual—widely portrayed as guilty by association.

A UN tribunal is now turning the spotlight on Israel’s role. The tribunal will add fuel to the ongoing inquiry into the suspicious death of UK nuclear weapons inspector David Kelly who complained of the “sexed up” intelligence on WMD that induced the war in Iraq.

Meanwhile, ridicule is being heaped on the report of the 911 Commission for its glaring omissions, including its failure to identify U.S.-Israeli relations as a key motivation.

Fast-emerging developments on other fronts also spell trouble for Israel.

Even now, no one dares mention the mysterious collapse of World Trade Center Building 7 which was not hit by hijacked airliners. No one dares repeat the comment of leaseholder Leonard Silverstein on a PBS interview when he conceded the building was “pulled.”

When waging Information Age warfare, false beliefs are routinely deployed as a form of weaponry to displace facts. That displacement process is much easier when the psy-ops includes an emotionally wrenching component.

Thus the necessity that those selling us an agenda wield influence in mainstream media.

With Israeli dominance also reaching deep into official decision-making, those in our military who question today’s Zionist narrative are routinely cashiered out of the service.

So who remains to counter the disinformation that passes for intelligence? In our tattered system of self-governance, who can deploy the facts required to displace the fictions foisted on us by Woolsey & Co.?

Answer: you and those with whom you share these facts and analyses.

The solution to this corruption requires people willing to tell the truth about what is being done to our country—and by whom. Make it personal—because it is. What you see chronicled in these accounts is how organized crime succeeds in plain sight.

In a system of governance dependent on facts for our informed consent, mainstream media was an early target of those perpetrating these ongoing psy-ops. Their success traces to domination of this key industry by supporters of this purported ally.

The facts are clear and the case is now compelling: Israel is not an ally but a reliable enemy.

Goldberg, Woolsey, Perle, Gingrich, McCain, Lieberman, Miller, Mitchell, Blitzer, Chalabi & Co. comprise an army of agents and assets enabled by an industry taken hostage by those destabilizing and delegitimizing the U.S.—from within.

Should the Zionist state again approach us for assistance—of any sort, the response must be clear and unequivocal: never again.