Home Health GORDON DUFF: AN ARMY TOO NEAR THE EDGE

“THE SUICIDE BLUES ARE BREAKIN’ UP THAT OLE GAME O’ MINE”

They always march off to war, fanfare, flags, speeches, parades.  There’s always an enemy, an evildoer, torpedo boats in the Tonkin Gulf or mystery airplanes and dissolving buildings in Manhattan.  The “armchair pundits” and “Monday morning quarterbacks” all assure is the same thing, it will be over in weeks, “the boys will be back for Christmas.”  This time, Christmas 2001 is looking like “Christmas 2012” or later, maybe never. 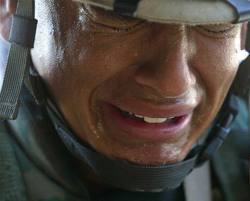 Just as there weren’t any North Vietnamese attacking the American fleet in the South China Sea, no weapons of mass destruction showed in in Iraq, no “Osama in Laden” in Afghanistan with his “hijacker training academies” the “war lies” of the past are, not just repeated, but enhanced and, if anything, more blatant than ever before.  It has taken awhile, several years into our current debacle, but mostly, what our troops have found is lies, opium fields, lots of angry people and the propaganda and manipulation flowing in from the Pentagon sounding increasingly desperate and hollow.

When a war is too long, too boring and not “telegenic” enough, troops coming home can expect a chilly welcome.  This war has been no different, as support for the war itself, as long as profit is there to be made, goes on forever.  Support for troops, the sick, the wounded, that’s something else.  The moment something happens, a “defense” issue becomes and “entitlement” issue and a warrior becomes a “welfare bum.”

Coming home, sick, injured, unemployed, divorced, alone, angry, alienated, those staying in the military, those fit enough to remain in and the thousands, hundreds of thousands who just couldn’t take it anymore are killing themselves in record numbers.

We sent an army to war, fed on phony patriotic hype and now wonder why we have to build new prisons, new mental hospitals and spend billions to keep them alive.  America isn’t ready to admit to what it did.  America isn’t that honest.  What kind of country would send its children around the world on a mindless “snipe hunt” for no other purpose than to feed the insanity of a few dozen billionaires and the crazed political and religious extremists that have had a stranglehold on America since the Reagan years.

If you want to know why we are losing so many of our children, and these are our children, there is no other way to refer to them, we can blame ourselves, our dishonor, our cowardice, our addiction to fear and vanity.  We owe them more than a lifetime of drugs, the cocktail of anti-psychotic medications that 1 in 4 of our active duty military are “surviving” on, and up to half of our veterans.  We conned them into a phony war, now we are conning them into a lifetime spent as a “zombie,” living on drugs that leave them in an impotent stupor.

TIME TO STOP THE CYCLE

An obvious answer would be to immediately end the wars, bring home our troops before more are damaged beyond repair and begin licking our national wounds.  Neither President Obama nor General Petraeus have the force of character, it seems, to accept the obvious.

We don’t count veterans, the numbers would be frightening.  There are fewer surviving Vietnam veterans than holocaust survivors.  We stopped checking.  There should have been over 2 million alive and healthy.  We took a quick look, only 700,000 were still alive.  The majority died in their youth or middle age.  Of what?  We don’t ask, we don’t want to know.  We just know it is happening again, we are watching it happen to Gulf War I vets and we are now seeing the cycle start.  What we are losing, of course, is another generation of our best.

If we wonder why we have so little leadership in America, could it be that a generation of leaders died in Vietnam?

One of the worst things we have done is to name diseases.  World War I created ‘shell shock.’  A massive hospital system spent decades caring for World War II vets, hundreds of thousands suffering from undiagnosed physical and psychiatric problems.  By the time this group had become a massive burden on our veterans health care system,  troops began coming home from Vietnam, poisoned with Agent Orange and suffering from the scars of war, physical and psychological.

We dealt with them by pushing them away, attacking their service, their sacrifice and systematically fighting them through a federal bureaucracy that only began to make an effort to examine the level of disaster a few short months ago, 4 decades after the majority of troops returned from war.

Even then, congress is working to stop that meager effort, one decades late, a rudimentary attempt to address an injustice beyond redemption.

Our current efforts, throwing the sick and wounded “to the wolves” by finding them “unfit for service” has already killed countless.  Suicide prevention program, late to begin but an honest attempt to help, are little but an admission of failure.  The drugs we are giving our troops, our veterans, are medically insane.  Anyone who can read should look at the list of drugs, the interactions, the side effects.  Poison.

This is how they see it.  Are they right?  I don’t know, maybe.  We can’t fix America, nobody seems to care anymore, not really.  Destroying things and blaming others is now a national pastime, hell, we now have a political party based entirely on this concept.  You know who you are!

What we do know is that we are going to spend billions of dollars trying to fix our broken army.  Drugs and talk, drugs and lies, aren’t going to work.  Hope will work.  Hope isn’t going to come from a parade or a Veterans Service Organization’s Friday night bingo and booze.

We have to buy some time, do some quality “reprogramming” and help our young people acquire the tools necessary to live in the country their “folks back home” allowed to be destroyed.

Be honest, this is what happened, look around you.  Try to get a job, a mortgage, tell me I am wrong.

We have a problem we can easily outline, several hundred thousand veterans and military at risk.  Triage will give us at least 40,000 who may end up homeless, addicted, incarcerated or dead in two years.

We have money.  We have facilities.  What we need to do is spend the money and use the facilities to give the 40,000 hope.  School won’t do it, many aren’t ready and don’t have adequate support to positively respond to an academic environment.  We can’t store everyone in a college somewhere, we have tried that before.  It didn’t work.

What we have to do is provide hope by altering our soldier’s and veteran’s perceptions of their future, of their country and how they can survive and endure, even enjoy a meaningful life.

Something those who have never been to war probably don’t think about is, well, what goes through someone’s mind when then are 8000 miles from home and unable to pick up, head for an airport, whenever they want.  Now imagine someone having to redeploy, yup, just like it says on the shampoo bottle, wash and repeat.  The view of America, of home, call it a “reality construct” if you will, become idyllic when away, a perception easily destroyed, even returning under the best of circustances.

Pleasant homecomings are the stuff of fiction.

The program I am suggesting would place 5,000 soldiers and veterans at a time in a 3 week recreational program integrating travel, education, life skills and enjoyment.  The initial basis for the program would be the Armed Forces Recreation Centers, military lodging and a renewed “R &R” program, organized by veteran volunteers, MWR (Morale, Welfare and Recreation) specialists in the military and every genuinely patriotic American organization willing to help.

Individuals would be eligible every 6 months, programs would provide vacation opportunities in the US, including Hawaii and Alaska, Europe and elsewhere.  “Space A” transport and lodging would be used along with available military facilities.  Few know how extensive the military recreation capability is but, during the height of the Cold War, our capabilities were extremely impressive with ski lodges, beach resorts, golf courses, campgrounds, many in or near the world’s top tourist sites.

Instead of months in psychiatric programs, and thousand are in such programs now at incredible expense, we can offer hope, healing and real appreciation in place of drugs and bureaucracy.

Drugs and bureaucracy have killed enough of our children.

America has major military air transport hubs, very much airports, in places such as Aviano, Italy or Ramstein, Germany.  In fact, we have many such facilities, capable of logistically supporting this program as they do travel for the endless thousands of military retirees who use such facilities each month.

We have three weeks to break a cycle of despair and hopelessness.  Picture yourself, home from war, unemployed, medicated, no future, the walls closing in.  What will break that perception?  Do we send every returning veteran down to the VA to apply for disability compensation, a lifetime of government checks, psychiatric appointments and pills?

This is what we are doing now and doing a terrible job of it at that.

These programs aren’t entirely experimental.  They have been tried, they have worked.  However, as they are inexpensive, surprisingly so, they have not been supported actively.

We only make this suggestion because, frankly, we don’t see another choice.

“I am suicidal and depressed again, the damned VA is sending me to the Alps for a hiking vacation, fourteen days of mountain air and bratwurst.  I am not sure how many times I can do this and still survive.”

Do we want to check the math?  Do a “cost/benefit analysis?”  Let’s simply do what is right.  These are our kids, they deserve it.  If we are going to rebuild America, lets start here by investing in our future.