The Holy Land is Here in the USA where, We Americans, The True Chosen People Live! 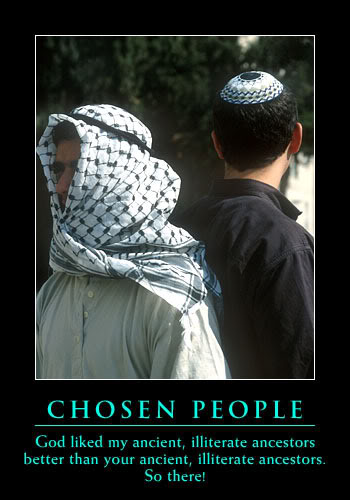 Recently, there has been a wave of right wing U.S. Christian fundi leaders in the USA who continue to assert to our U.S. peoples that Jews are the “Chosen People” and that our $ 10 billion per year in money and contracts paid by our U.S. taxpayers to the Zionist State of Israel is just and right based on their hardlined religious beliefs.

I have thought long and hard about this assertion.

Then my kids tell me that the State of California is cutting their education with deep budget cuts, and my neighbor, a right wing Christian, tells me he’s losing his house because his wife’ job at the post office is being cut by 30 hours per week, and then my right wing Christian friend in Las Vegas tells me that he lost his job completely and is now part of the 15% unemployed in that city and soon will be part of that beaten group who’ve lost their homes to foreclosure.

Chosen People? What is going on here?

Why are we Americans paying for a tribe that lives half-way across the globe in a land that’s smaller than Rhode Island while our children and their future children get the screw job here at home? This makes no cents at all.

And what do we get for our investment in Israel? Um, err….the pleasure of knowing that we are funding the alleged chosen people? Are you kidding me? Who cares about these so-called “Chosen People”? Our people come first! Who made up this myth?

I mean, what kind of idiotic society must we be if we send our resources to a tribe that makes fun of us at the expense of our tribe. “Stupid” is the word that comes to mind…..

If the Jews wrote the old testament book back 8 trillion years ago calling themselves the chosen people, then be advised that I, the new American True Prophet of God, Johnny Punish, hereby declare in my new biblical book titled “Americans Come First: The True Chosen People” that;

WE AMERICANS ARE THE REAL TRUE CHOSEN PEOPLE!

Okay! How’s that followers! That’s right, we are the chosen people! Now, doesn’t that feel right to you! Believe me, it’s sane to put yourself and your tribe first. What is insane is to send our resources out to peoples that do NOT share our values, interests, or care one lick about the welfare of our children and families.

We are the USA. We are NOT Israel. Israel is NOT our country! Let’s get with this “We are the Chosen People” concept!

So if you are drinking the fundi zionist kool-aid, no worries, we have a cure outlined by me, your new prophet. It is very simple! Step outside your home, then;

Kiss the Holy Ground you Live on Because the USA is # 1, NOT Israel

As a US Citizen, you’re either Pro-USA or you’re not! Invest all of our monies at home for our interests!  In the USA, we are the Chosen People!  Period!