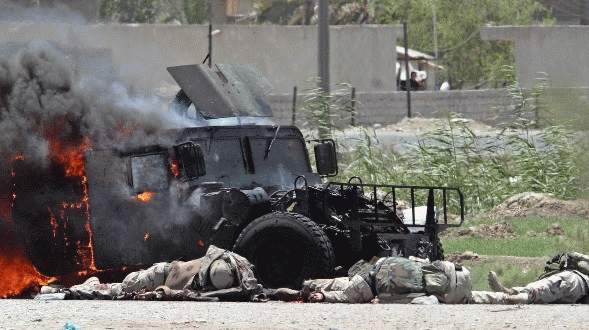 Like a Moth to the Flame, the US Continues to Defy First Law of Holes in Afghanistan ~ Stop Digging!

Obama’s war, or better said occupation, continues to take America down the road of moral and financial disintegration and eventually  to the graveyard of Imperial Empires: Allen L Roland

Six U.S.Soldiers were killed and more than a dozen American and Afghan troops were wounded last Sunday morning by a suicide bomber in Afghanistan. American fatalities have risen steadily for five years, with 479 American soldiers killed so far in 2010 ~ that’s more than three times the 155 casualties in 2008. We are now paying the daily price of a hated occupying force with over 1430 Americans killed in action so far in Afghanistan.

Last Friday, President Obama paid a surprise four-hour visit to American troops at Bagram Air Base in Afghanistan. There, in a pep talk to the troops, he echoed the Bush style predictions of victory, assuring “the finest fighting force that the world has ever known” that “you will succeed in your mission!”

No one seems to know the elusive mission but everyone knows where we are heading ~ the graveyard of Imperial Empires and most certainly not victory !

Tom Engelhardt sums up our lemming like dash to irrelevance and disgrace in Afghanistan ~ “Be careful what you wish for.  In a war in which it costs $400 a gallon to deliver fuel to an energy-guzzling military at the end of embattled supply lines thousands of miles long, another seven or eight years to a “victory” that leaves the U.S. in control of Afghanistan (Afghanistan!) while paying for a 400,000-man strong, American-trained army and police force, might be the worst fate possible … When it came to an explanation for why we were pursuing such a war so tenaciously over decades, the president simply reiterated the usual: that our goal was never again to let that country “serve as a safe haven for terrorists who would attack the United States of America.”  These days, when it comes to the “why” question (as in “Why Afghanistan?”), that’s about as much as this administration is likely to offer.  It seems that explanations, too, and even the need for them have disappeared into the shadows.”

To understand Afghanistan ~ you must first understand that President Obama purposely exists in the shadows so he doesn’t have to take a stand and can maintain a non attached inertia regarding the great questions we are facing.

In Roger D. Hodge’s new book, The Mendacity of Hope: Barack Obama and the Betrayal of American Liberalism, Hodge explains Obama ~ “Obama’s preposterously two-faced approach to Afghanistan is a perfect illustration of his compulsion to split the difference on any given political question ~ as is the disgraceful inertia of his response to [Deepwater Horizon/ BP] the worst environmental catastrophe in American history. He dillydallies, draws out both friends and opponents, dangles promises in front of everyone, gives a dramatic speech, and then pulls back to gauge the reaction. Since the policy itself is incoherent ~ and, as usual with Obama, riddled with stipulations and conditions ~ he can always trim and readjust as necessary….Since Obama is an intelligent man, surely he understands the meaning of mendacity.”

As Jean MacKenzie, writes in GlobalPost: “More than half of all Afghans – 55 percent – want U.S. forces out of their country, and the sooner the better. Add it all up, and it is pretty bad news for the U.S. military as it examines its options ahead of next week’s Afghanistan strategy review…. The poll … shows a nation yearning for an end to hostilities… “They just do not want us here,” said one foreign diplomat, speaking on condition of anonymity. “The Western troops, when they came here [in 2001] said ‘the Soviets were invaders, we are liberators. But for Afghans it is all the same ~ we are all ‘foreigners.’ They will fight anyone who comes here.”  Read more ~

So there you have it, the Afghans don’t want us there , the vast majority of the American people don’t want us there ~ but the Military Industrial Complex would grind to a halt without this illegal occupation and, of course, Obama needs his so called war in running for his re-election in 2012.

An interesting note ~ The Obama administration’s mid-December Afghanistan review will coincide with a vast Veteran’s for peace march on the White House on December 16th. Obama’s in house review will be missing the late Richard Holbrooke. In his final words before emergency heart surgery, Richard Holbrooke, the influential U.S. diplomat who died on Monday following complications from the surgery, urged an end to America’s nine-year old Afghanistan conflict ~ Holbrooke’s Last Words: “You’ve Got to Stop this War in Afghanistan” ~ words which the Obama administration later refuted as a joke. But the jokes on Obama who must now take full responsibility for the longest war and illegal occupation in America’s history.

Vietnam veteran and anti-war activist Ron Kovic correctly explains the importance of this day of protest ~ “A time comes when a people can no longer wait. A time comes when the agonies, the suffering, have become too great. A time comes when a people must act and do what is necessary. Lives are at stake. No longer can we trust the President or politicians to end these wars. No longer can we believe them when they say the troops will come home soon. They have long since lost their credibility.
Each day that passes another life is lost. Each hour that this war drags on the need for a daring new approach by the anti war movement becomes more apparent. Bold, creative, and imaginative leadership is needed, and I do not believe there is a group more suited for that task at this time than the veterans of our nation’s most recent conflict.
At exactly 10:00 a.m., Thursday morning, Dec. 16, 2010, veterans of Iraq and Afghanistan, including troops now serving in the armed forces of the United States, will be leading a dramatic act of non-violent civil disobedience in front of the White House in Washington, D.C. with other brave veterans and citizens, protesting the wars in Iraq and Afghanistan, calling for all troops to be brought home immediately and without delay.

“All tyranny needs to gain a foothold is for people of good conscience to remain silent.” ~ Thomas Jefferson