Home WarZone These are the times that try men’s souls 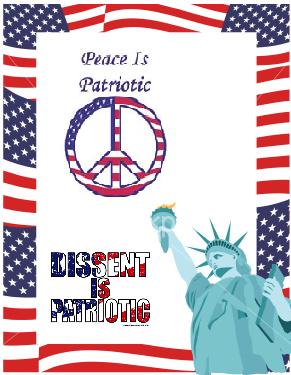 Dayton, Ohio Chapter of Veterans for Peace represented at the 16 Dec 2010 Peace Protest at the White House.

It is important to emphasize that the reason why I’m spending so much time and energy focusing on – what – one War Protest in Washington, DC when over the past decade or so there have been hundreds?

Before Christmas, I went through every video posted on YouTube, Facebook (and other social media sites), and I was not surprise to see that there was enough independent coverage of this one event to make an hour documentary movie. 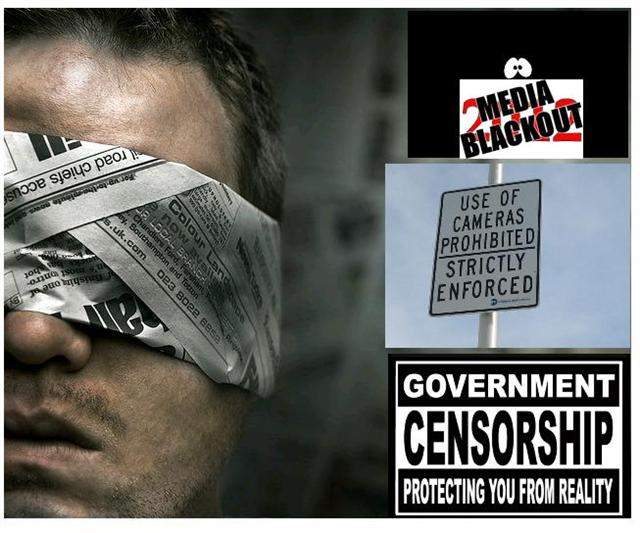 This after action report was sent into VT by Steve Fryburg, the Dayton Ohio rep for Veterans for Peace.

These are the times that try men’s souls…

Winter Soldiers Confront the White House: Mass Arrests as They Put Their Bodies on the Line for Peace

Steve Fryburg, of Dayton, participated in the Veterans for Peace action at the White House last week, and was arrested.  That’s him looking at the camera.  Below the picture is a little of what Steve wrote about the experience. Steve’s son was in Iraq at the start of the war, and he is himself a veteran.

“Share by all means. The media didn’t do anything with it and the public needs to know that Veterans, including a Police Officer, a Doctor, and many other Americans are willing to go to jail in increasing numbers, because our leaders won’t listen to reason about Afghanistan.

I felt I was in wonderful company.  Most of us bonded out of jail, so we won’t have to return. The misdemeanor charge was failure to obey a lawful [police] order.

“I got out of jail at a little after 5pm and got back to my car by 6 to drive back to Ohio. I arrived back in Dayton around 3am. I had the honor of sharing a jail cell with Daniel Ellsberg for a little while during processing. He has always been one of my heroes so that made my day. Only bad part about it was my old body rebels against having my arms cuffed behind my back for several hours, so I’m feeling a little sore today. But compared to School of the Americas, I’m sure this was a picnic. As a law enforcement officer, it was a really strange feeling being on the receiving end of the arrest.”

The complete YouTube video footage I was able to shoot can be found at http://www.youtube.com/watch?v=Rg7CsI679oE . The last part of the video I had stepped down from the fence to take another video shot and that is when the police got me, I was number 52 to be arrested. We, Veterans for Peace will be returning in April 2011 for another such action.

Chris Hedge (Pulitzer Prize-winning journalist and war correspondent) gave a very inspiring speech before the action that can be found on YouTube at http://www.youtube.com/watch?v=tOde31QYbI0.

[Below is a moving photo Steve posted of the family members who had lost loved ones in Afghanistan in the last weeks. This was one of the most sad and touching images to come out of the civil disobedience action on 16 Dec 2010.] 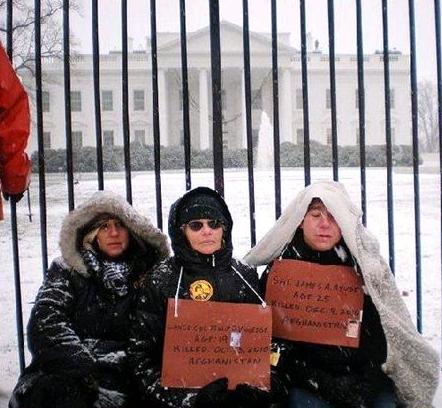 These are the times that try men’s souls…

The summer soldier and the sunshine patriot will, in this crisis, shrink from the service of their country; but he that stands by it now, deserves the love and thanks of man and woman. Tyranny, like hell, is not easily conquered; yet we have this consolation with us, that the harder the conflict, the more glorious the triumph. What we obtain too cheap, we esteem too lightly: it is dearness only that gives every thing its value. Heaven knows how to put a proper price upon its goods; and it would be strange indeed if so celestial an article as FREEDOM should not be highly rated. Thomas Paine, The Crises, 12-23-1776. 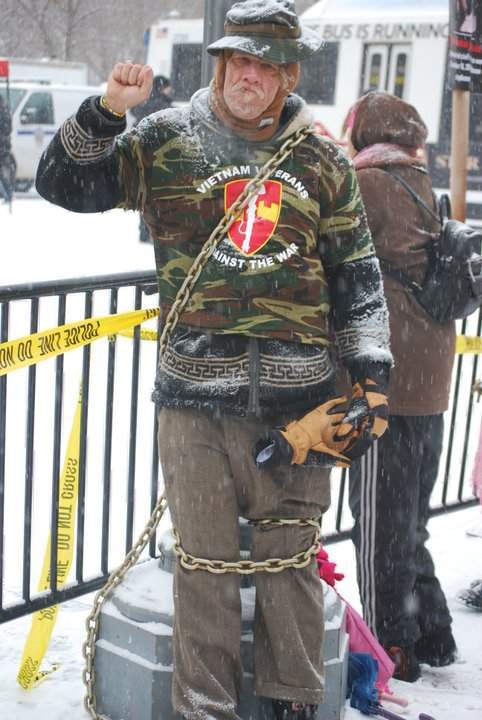 Bill Homans, [musician] Watermelon Slim (VVAW) was in D,C. in the company of other VVAW members, who were there in support of Veterans For Peace’s call to action for Civil Disobedience; that of chaining themselves to the White House fence at the end of a march from Lafayette park, to the White House.  Slim had come to town with Zach Choate, a Southeast Region IVAW member, that is an Operation Recovery activist and spokesperson.

Those in the photo below right (courtesy of Bill Perry), are Al Kovnat, Dr Jon Bjornson, Sam Adams, and Bill Perry of the Philly Chapter of VVAW, and Jim Baldridge (holding the flag staff) of the Baltimore Chapter. I have no idea who it was that is kneeling in front, or holding up the flag tip on the right side; but, thanks for being there with my brothers. These folks joined with others at the White House fence, and handcuffed or chained themselves to it in solidarity, and with unity of purpose; that of ending the continuing war in Afghanistan…all were arrested, as seen in the compelling video (below) of the speech by Chris Hedges, and the accompanying arrests of all Winter Soldiers present and accounted for… 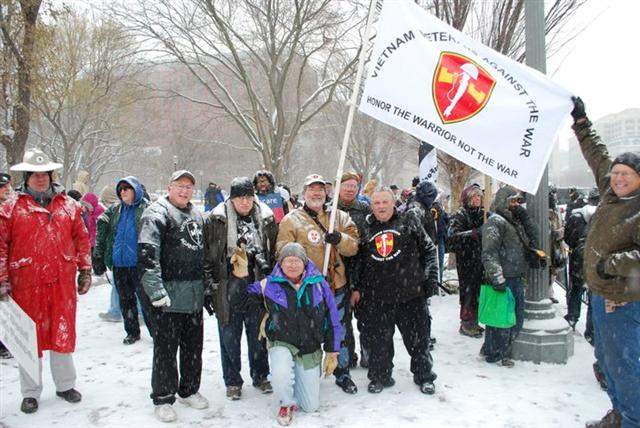 It was reported that two-thirds were Veterans, and the remainder were from Code Pink and other organizations that were there to Take A Stand For Peace On Earth. They were unified in purpose in calling for an immediate end to the continuing war in Afghanistan.

Join us as the resistance continues to grow:

Vietnam Veterans Against The War

Iraq Veterans Against The War