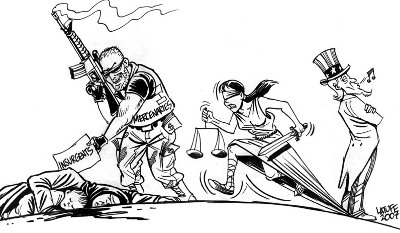 Af-Pak remains the hottest issue for analysts and Think Tanks, where everything is discussed under umbrella of speculations and ambiguity. The fast changing and unclear policies in the area leave room for new lines each having potentials to lead to the final solution.“In Pursuit of Failure” published in Dawn by Tariq Fatemi on 30 Dec, 10 says  that during nine years of occupation, over 2,000 US lives were lost and billions of dollars wasted, yet the US is still in the process of determining what its strategy in Afghanistan should be. Whatever US decides about its exit strategy from Afghanistan, Pak should realize that they have paid an enormous amount in furtherance of US goals. However this is not the issue, Pak should be looking towards the best possible solution of Afghanistan after exit or handing over of security issues to Afghan LEA.

“The Continuing U.S.-Pakistani Disconnect over the Afghan War” published by Stratfor on 29 Dec, 10 points out that both sides agree on a negotiated settlement with the Afghan Taliban, but there is a huge disagreement on how to go about getting to the negotiating table. Until that happens, the U.S.-Pakistani disconnect over the cross-border insurgency is likely to continue. Now US is mounting pressure on Pak for operation in NWA without considering its repercussions. The Pakistanis want the Americans to realize that they can’t risk exacerbating the war in their country by going after forces that are not waging war against Pakistan. The US view the reason for the delay of sending forces into North Waziristan as the consequence of a resurgence of militant activity in other parts of the tribal areas like two separate attacks over the weekend in Mohmand and Bajaur agencies. The paper does not consider the quantum of Pak troops and border posts working in area as compared to forces from NATO and US.

Moreover, this issue was highlighted a year before in an article “Taliban take over Afghan Province” written by Syed Saleem Shahzad on 29 Oct, 2009 on Asia Times that US has withdrawn its troops from its four key bases in Nuristan, on the border with Pak. This left northeastern province as a safe haven for the Taliban-led insurgency to orchestrate its regional battles. This withdrawal directly affected war led by Pak troops against Taliban as militants marched towards Mohmand and Bajaur agency to help their fellow Taliban.

The threads of these mind boggling analysis have deep links to the conflicting US policies by Pentagon, bureaucrats, and White House. They have failed to come up with any solution for the ongoing war in Afghanistan for last nine years directly impacting Pak and asking them to do more. The subject is of great importance for US, Pak, Afghanistan and other players and everyone is trying to keep its cards hidden till the last moment to gain max leverage at the point of decision making. It seems that point of decision making will start once the Stakeholders go for formal negotiations with Taliban for political solution. At military level, Gen Petraeus and Gen Kayani play their cards  to gain military leverage in the area. The security dynamics of the area remain complex having far future implications. Planned killing of Al-Jabouri the commander in Mosul by suicide bomber after failing in at least five previous attempts shows their mindset. Society and environment remain the main area of concern both for LEA and Terrorists to shape up their future strategy. The solution may lie in looking for joint benefit for the coalition partners and pursue them under umbrella of confidence on each other not only to secure this part but the entire world.