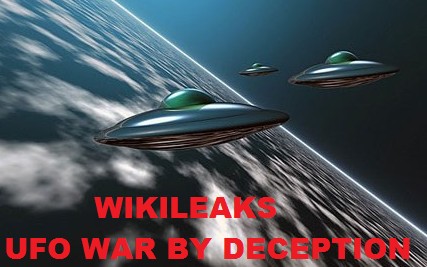 “…it is worth noting that in yet-to-be-published parts of the cablegate archive there are indeed references to UFOs.”

When CFR Director, Zbigniew Brzezinski, one of the most feared power brokers in Washington or anywhere else, openly attacked Wikileaks as an intelligence operation, siding with Jeff Gates, Dr. Alan Sabrosky, William Engdahl, Lila Rajiva, Gordon Duff and so many others of the independent alternative media, Wikileak’s days were numbered.  The failed UFO scare, whatever it was supposed to do, has backfired, putting a bullet in the heart of Wikileaks.

After a “bang up” start, the Iraq helicopter video, Wikileaks spent its credibility supporting Israel and attacking, not only the Islamic world but the United States as well, in a clearly biased and “ham-handed” manner.

As Dr. Alan Sabrosky puts it:

“The one striking exception in all of this global tour de farce <sic.> is the Middle East. Certainly, even aside from Wikileaks founder Julian Assange’s fulsome praise of Binyamin Netanyahu, what is said and what is not, represent the message Israel and its partisans in the US Government (itself heavily Zionist and “Israel First” in orientation) want the world to hear, believe and accept. The message coming across in the US diplomatic cables could have been designed and drafted by Avigdor Lieberman, and who knows? It may have been…”

BETTER A WIKILEAK THAN “WIKI-TERROR”

This year’s holiday drama was the “wiki-fiasco.”  Last year it was the “crotch bomber” and the “Times Square Fizzler.”   In the end, both disappeared into the shadows, exposed, “debunked, ” phony as a “three dollar bill.”  The Detroit “crotch bomber” and the “fizzler,”  as with the FBI’s “exploding Christmas tree” “skit” in Oregon, staged “media events,” patsies, all with the same smell, “false flag” theatre timed to influence world events.

Our only questions about Assange, failed “leaker” and over-exposed “celeb” is whether  he was ever real.  If he was, and he may well have been, what happened to Wikileaks is a crying shame.

Three weeks before, Zbigniew Brzezinski had said that Wikileaks was a deception operation by an intelligence agency.  Assange named the mechanism for the deception, admitting in fact that what was leaked had, in reality, nothing to do with Wikileaks.  Wikileaks was, in Assange’s own words, the New York Times.

23 year old Jonathan Azaziah in his exhaustive analysis, Wikileaks is Poison:  Deconstruction of the Myth, not only closes the case on Wikileaks but on those in the media who have been complicit in the deception.  The deception program, you can’t call it anything else, running interference for Wikileaks has two edges, defense by “shills” and attacks by “assets.”  Not only articles and broadcasts in defense of Assange but “half-hearted” attacks from the hated and discredited like Joseph Lieberman, Karl Rove and Rush Limbaugh, are also part of the defense of Wikileaks, part of the “game warfare” used to sell deception as fact, myth as truth.

As Council on Foreign Relations Director,  Zbigniew Brzezinski,  too big a target for Abe Foxman’s infamous “Antisemitism” smears, had to be discredited, thus a campaign in the “alternative media” was begun.  In this piece by Alexander Cockburn, whose online blog “Counterpunch” has been suspiciously oblivious to Wikileak transgressions, we see attempts to blame Brzezinski, who left public service in 1981, nearly 30 years ago, for today’s debacle in Afghanistan.

“The U.S. began the destruction of Afghanistan in 1979, when President Jimmy Carter and his National Security Adviser, Zbigniew Brzezinski, started financing the mullahs and warlords in the largest and most expensive operation in the CIA’s history until that time. Here we are, more than three decades later, half-buried under a mountain of horrifying news stories about a destroyed land of desolate savagery, and what did one hear on many news commentaries earlier this week?”

When Brzezinski “outed” Wikileaks as a government spy organization, defending Wikileaks as an “intelligence asset” required discrediting Brzezinski, a director of the Council on Foreign Relations, the CFR.  No “mainstream media” is safe in attacking the all powerful CFR, the epicenter of the world’s power establishment, headed by David Rockefeller.

The orchestrated aspect of this attack and the litany of carefully timed attacks on Wikileak “debunkers” and Assange accusers by supposed members of the alternative media, particularly those whose “muckraking” manages to secure mainstream media exposure, sites and blogs that are uniquely well financed and sponsored while others less “sensitive” to Israel’s “needs” are boycotted and hacked  and “spammed” continually.

FOXMAN “LEAPS” TO THE WIKI-DEFENSE

The saddest part of all, ADL (Anti-Defamation League) head, Abe Foxman, issued a personal press release accusing Wikileaks critics of “Antisemitism.”  Foxman really shot himself in the foot on that one.  Only a week before, Julian Assange tried explaining the painfully obvious pro-Israel slant of Wikileaks.  He blamed the press, claiming that they censored Wikileaks.  This is the good part.  He didn’t say they censored their own reporting but that they censored the Wikileaks “dumps’ themselves out of “sensitivity” to the needs of Israel.

By that time, the stories about the Assange arrest had began to look a bit theatrical, the articles attacking Assange’s accusers, stating they were tied to CIA plots, Illuminati groups and Freemasons got wilder and wilder.  Then the ADL stepped in, hoping to spend their last shred of credibility to save what Brzezinski named, an intelligence operation.  All that the ADL and Foxman accomplished was to convince any doubters that Wikileaks was managed from Israel, something Assange, in his own statements and writings had made pretty obvious by then.

The ADL’s attempt at throwing its “credibility” behind Assange failed as the ADL has no credibility.  One of the primary activities of the ADL is suppressing news stories of Jewish Americans caught spray painting Antisemitic slogans on synagogues. The number of such reports can’t be cataloged, as they are purged from the internet and even newspaper archives.  The tactics used are infamous, the ADL playbook.

In December, Wikileaks “leaked” to the press that they held “cables” discussing UFOs.  Soon after, they “leaked” that that other documents, some proving that America was, not only using adapted UFO technology but was engaged in large scale military operations against “fleets” of UFOs over the “Southern Sea” were going to be made public.

In fact, in an interview with the Guardian, Assange said the following

“…it is worth noting that in yet-to-be-published parts of the cablegate archive there are indeed references to UFOs.”

A quick check of “Yahoo” results for “Wikileaks UFOs” yields 153,000 results, including promises of UFO releases by Wikileaks published by the UK Telegraph, MSNBC, India Times, CBS News, Guardian and many more.

When expanded on, however, in usual “wiki-fashion,” selected emails and calls to media “favorites,” the claim by Assange of “references to UFO” became something more sinister, references to a wide scale invasion of earth, a UFO takeover of human civilization.

As with the reputed UFO invasion itself, the Wikileaks “space alien” material has also failed to “materialize.”  Instead, Assange, with the assistance of Abe Foxman and others, “select” others, have mounted a defense of Wikileaks, attempting to deflect the deluge of skepticism that has developed with revelations about Assange and his “sensitivities” for Israel.

What kind of insanity would have driven this exhibition of bad judgement?

One day Julian Assange tells the world to hide under their beds from fleets of flying saucers and the next day he pretends it was all a joke?

The unreported and unspoken message of Wikileaks has always been justification for a war on Iran.  Whatever curiosity one could find in the material, the crux of Wikileaks always comes back to that same point.

If as Brzezinski and so many others imply, that Wikileaks is psychological warfare, in reality, a new form of global terrorism, aimed at destabilizing governments, perpetuating conflicts, justifying increasing world tensions, exploiting well known duplicity, not to inform but with calculated bias, is Assange more a “combatant” than a spy?

If, as we are seeing, Wikileaks is a form of military attack by, not a group of “truth tellers” but a nuclear armed state, such as Israel, one with a history of using deception and worse, can Wikileaks be called “terrorism?”  Is Assange a terrorist?  Is Wikileaks a real and proven threat, less ethereal than Al Qaeda?

Truth is truth.  Partial truth told with bias to influence world events leading to destabilization, leading to war, encouraging terrorism, done on behalf of an intelligence agency is not even propaganda, it is war, as much as a car bombing of a church or a video of a sniper’s bullet killing an American soldier in Iraq.   In fact, Wikileaks, if you think about it enough, has the smell, the odor and flavor of those bin Laden video and audio tapes, the ones released years after this death in December 2001.

The end purpose of all these things, these acts of war, all the same.