A QUANTUM LEAP IN TECHNOLOGICAL GROWTH

Since coming into existence, the Pakistani nation has had its fair share of trials and tribulations. The strategic 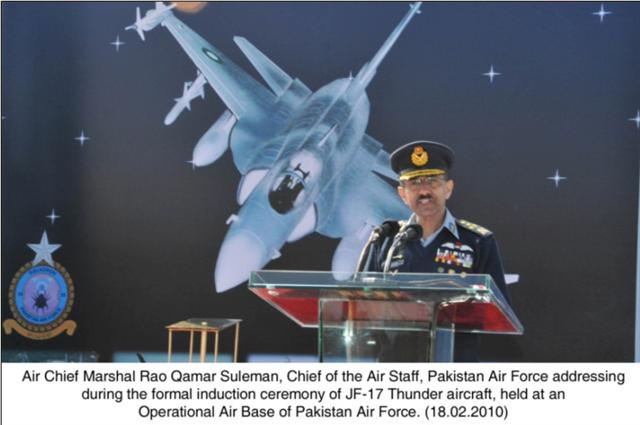 geographical location and fast emerging geopolitical scenarios have been the imposing determinants on its policies and direction. Notwithstanding our weaknesses as a nation, the people of Pakistan have undoubtedly given a good account of themselves by displaying resilience, perseverance, and unwavering determination in the face of imposed hardships.

Air power in the 21st century has emerged as the decisive factor in modern day warfare and is the most effective element of the military. A fighter aircraft, being the primary platform of air power, has held the key to success in most, if not all modern war scenarios. However, while potent military arsenal deters foreign aggression, it is the indigenous military capability that truly provides a dependable and sustained defence both during peace as well as war. Nations desirous of pursuing an independent foreign policy with minimal external influence thus need self‑sufficiency in production, operation, and maintenance of their military equipment. The spiraling cost of inducting off‑the‑shelf modern weapon‑systems is also supportive of this option.

Pakistan Aeronautical Complex, established in the early 1970s with the aim to create an indigenous facility for overhauling aircraft and aero‑engines has contributed significantly towards PAF’s operational readiness over the years by optimizing aircraft availability. The set‑up gradually flourished, leading PAC into manufacturing of a small trainer aircraft by establishing the Aircraft Manufacturing Factory (AMF). The factory has gathered experience of manufacturing over 300 Mushshak / Super Mushshak primary flight trainer aircraft and of producing structural assemblies of K‑8 Advanced Jet Trainer. Success on these and other similar projects afforded the confidence to the decision makers to venture into manufacturing a fighter aircraft at PAC. On the other hand, Kamra Avionics & Radar Factory (KARF), which was already producing Radar Warning Receivers and Griffo‑7 Airborne radars for the F-7P aircraft since 1996 was naturally suited to the production of JF‑17 avionics.

The primary aim of the JF‑17 co‑production project is to establish the capability for the agreed work‑share and to sustain a production rate commensurate with PAF’s operational requirements. In order to produce its share of work, AMF is establishing the capability to manufacture, assemble, and test this modern fighter aircraft. The capabilities being acquired represent the cutting edge of technology, have broad industrial applications, and are in most cases unprecedented in Pakistan in terms of capability and capacity. In the field of avionics development, self‑reliance has been achieved by acquiring complete Integration‑technology. Setting up facilities for the avionics production at KARF was again a huge task, involving development of infrastructure and induction of a large number of equipment items.

In the JF‑17 program, first milestone in manufacturing was achieved with the capability of sub‑assembly work in Jan 2008. In planning for the JF‑17 project, the sub‑assembly manufacturing was preferred as the beginning step in view of the previous experience from production of Karakoram‑8 jet trainer. After the readiness of necessary infrastructure, human resource, and the administrative framework, the final assembly and flight‑testing commenced in June 2009. On 23 November, in the same year, the first indigenously assembled JF‑17 aircraft rolled‑out from the Aircraft Manufacturing Factory of Pakistan Aeronautical Complex. This capability achievement phase was completed in May 2010 during which six aircraft were produced and handed over to PAF. The next phase planned to commence in the near future is the manufacturing of piece‑parts for which final preparations are at hand. On the avionics co‑production side, nine systems are being co‑produced while another three have been indigenously developed in Pakistan. The in‑country production stands at 30% of the package in numbers and more than 50% in terms of value. PAC remains committed to enhance this figure in the next phase.

The JF‑17 co‑production project is one of the most ambitious projects undertaken at the Pakistan Aeronautical Complex. The tangible benefits of the JF‑17 program extend beyond the apparent defence outlook to the creation of a highly enabled technological hub in the country. The wide array of diversified engineering facilities presents opportunities to both academia and the industrial sector of Pakistan. The presence of state‑of‑the‑art technology within their reach can greatly enhance the awareness level with minimal additional investment. Experts can research on ways to best utilize the latest technologies available at PAC to the mutual benefit, thus innovatively improving the value‑addition in the manufacturing sector of Pakistan. The project has afforded more than 4000 employment opportunities, thereby contributing towards the well‑being of people from all over the country. The growth in expertise shall benefit the local industry through consultancy, advice and training. The human resource trained on these technologies at PAC can make valuable contributions to the national skill potential. Over a long period, capitalizing on their high skill level, the human resource can even evolve as an upstream vendor industry.

The fruits of this endeavour are manifested in the form of JF‑17 Thunder aircraft, which is an all weather lightweight aircraft, having an advanced airframe design, high aerial manoeuvrability, state‑of‑the‑art avionics systems, and a wide array of weapons. Equipped with these features, it can truly be placed in the higher strata of medium‑tech aircraft category. The flexibility of customisation in incorporating the avionics suite would prevent the briskness of technological advancements from outpacing the strategic foresight. The JF‑17 has been designed to stand in good stead in the future and it is envisaged to remain the mainstay of PAF for years to come

The JF‑17 Thunder Programme is a landmark achievement in the quest for realizing a dream through friendly cooperation between two countries. The co‑production of JF‑17, a vital and integral element of the overall programme, is undoubtedly a challenging project undertaken by Pakistan Aeronautical Complex in support of the national goal of self‑reliance. The newly established state‑of‑the‑art facilities represent a quantum leap in the technological capability of PAC and shall be a forerunner of even bigger endeavours.

The personnel of PAF draw inspiration from the countless sacrifices rendered by our national heroes and the contribution made towards defence of the motherland. The distinction of belonging to a select group of countries capable of manufacturing a fighter aircraft should indeed be a boost to the national esteem. The people of Pakistan can cherish the JF‑17 Thunder with resounding national pride, as the skies of their beloved motherland shall be guarded by a potent homegrown platform.