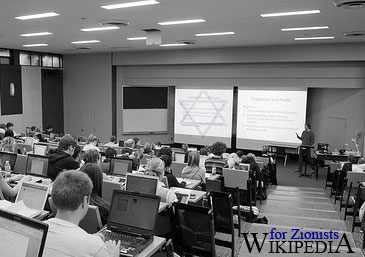 WIKIPEDIA MUST BE BLOCKED FROM THE UNITED STATES FOR “INTELLECTUAL TERRORISM”

“WIKIPEDIA THE REAL THREAT, NOT WIKILEAKS”

The government of Israel, part of a well organized and funded intelligence operation, has designated millions of dollars to undermine the integrity of Wikileaks and to systematically attack, through hacking, spam, server overloads and “pressure” on journalists, all internet content that isn’t biased in favor of Israel.

Evidence is now clear.  Wikipedia, the vast online encyclopedia used as a reference source by amateur and professional scholars, journalists and researchers of all kinds is now proven to be subject to a massive assault by the government of Israel.  Hundreds of Wikipedia editors are being recruited and trained each week, tasked by the Israeli government with instilling open “Zionist” bias in even the most innocent areas, not just news, but personal biographies and, especially history.

The greatest danger is to children, who have grown up using Wikipedia as a wonderful resource.  Now our children need protection from propaganda, bias and lies from a source that has, for so many years, enriched their lives.

This systematic assault on free speech and destruction of a world wide resource of unmeasured value is, perhaps, one of the most serious acts of intellectual terrorism imaginable.

VT strongly urges all responsible web editors to enforce similar policies and warn their readers and staff.  We further warn all site moderators of suspicious comments that parrot common pro-Israel talking points.  We have tracked common IP addresses to dozens of non-existent readers of late.  We have also noted that proxy servers, Australia, New Zealand and elsewhere, are being used to “launder” these internet terror attacks.

VT, with great sadness and reluctance, is now forced to ban all Wikipedia content from the site, under the assumption that such content is adversarial to the security of the United States and its military forces.