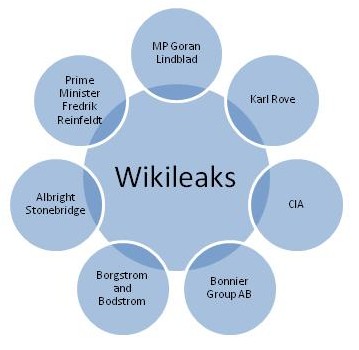 WMR has learned from a long-time Republican Party consultant that the CIA used Sweden to launder the transfer to Wikileaks of carefully screened and redacted State Department cables and the subsequent release of the cables to pre-selected corporate news media entities. Sweden was chosen because of its so-called “press freedom and freedom of expression” traditions in an effort to make the release of the cables by Wikileaks appear to be unconnected to a covert CIA and Pentagon psychological operations program designed to place further controls on the Internet.

The Wikileaks operation was conducted with the help of two leading Swedish political leaders, both of whom have maintained a long association with the CIA and associated U.S. government entities. One of the conspirators is Swedish Prime Minister Fredrik Reinfeldt who was discovered in high school in Sweden by U.S. Republican Party operative Karl Rove. Rove, a former executive director of the College Republicans, was, in the early 1980s, a GOP campaign consultant who also began conducting overseas operations for the International Republican Institute (IRI) after its founding in 1983 as an overseas outreach branch of the Republicans –thanks to funding from the CIA-connected US Agency for International Development (USAID) and the National Endowment for Democracy, as well as the State Department.

In 1983, the same year the IRI was founded, Reinfeldt joined the Moderate Youth League, the youth wing of the Swedish Moderate Party, with Rove’s encouragement. Just as Rove had used political chicanery in 1973 to defeat two opponents –Robert Edgeworth and Terry Dolan — to be elected chairman of the College Republicans, Reinfeldt ousted Moderate Youth League chairman Ulf Kristersson at the league’s convention in Lycksele in 1992. Reinfeldt, the leader of conservative insurgents, garnered 58 votes to 55 for Kristersson, who represented the party’s libertarian wing.

After the defeat of the Moderate Party government of Prime Minister Carl Bildt in 1994, Reinfeldt, in Rovian fashion, began to criticize the party leader. Reinfeldlt was also a strong critic of the modern Swedish welfare state. In 2003, Reinfeldt became Moderate Party leader and in 2006 his right-of-center coalition defeated the Social Democrats making Reinfeldt the Prime Minister.

One of Reinfeldt’s closest advisers is Moderate Party member of parliament and avid anti-communist Council of Europe parliamentary official Goran Lindblad. Lindblad has been fond of offering political asylum and sanctuary in Sweden to dissidents, but not just any dissidents, only those that support an agenda in concert with the agenda pushed by the likes of Freedom House of New York and George Soros’s Open Society Institute, neo-con contrivances that oppose any form of communism, whether in China or Cuba, or any left-wing socialist governments for that matter — the very same agenda promoted by Wikileaks.

Although it is not certain that Lindblad helped lay the groundwork for the invitation to Wikileaks’s founder Julian Assange to move his operations — and his quarter million State Department cable cache — to Sweden, there is yet another connection between a Swedish politician involved in the Assange criminal investigation for sex crimes in Sweden and the CIA.

Assange’s two female accusers’ legal representation in Sweden is being handled by the law firm Borgström & Bodstrom. The Bodstrom on the law office shingle hanging in Stockholm is Thomas Bodstrom, the Swedish Justice Minister from 2000 to 2006 in the Social Democratic government of Prime Minister Goran Persson. From 2006 to October 2010, Bodstrom was chairman of the Swedish parliament’s Justice committee. After losing his chairmanship, Bodstrom moved in  November 2010, along with his family, to northern Virginia — just as the Wikileaks “story” unfolded. The Social Democrats refused to grant Bodstrom a leave of absence while maintaining his parliamentary seat. Bodstrom resigned his seat. WMR has learned from the Republican Party source that Bodstrom, upset over the decision of the Social Democrats, is now in negotiations with Reinfeldt and the Moderates to switch parties. And, we have learned, the CIA is quietly grooming Bodstrom, a former Swedish soccer star, to be a future Prime Minister of Sweden for the conservative Moderate Party.

Bodstrom’s colleague in the Persson cabinet was Par Nuder, the Minister of Finance, who also spent a large part of his youth in Israel. At the same time the Bodstrom family moved to Virginia, Nuder joined the consultant-lobbying firm of former Secretary of State Madeleine Albright, Albright Stonebridge Group, which she heads along with former Clinton national security adviser Sandy Berger and former Senator Warren Rudman (R-NH). Another executive at Albright Stonebridge is former Bill Clinton foreign policy adviser Wendy Sherman, who also serves on the Defense Policy Board under Secretary of Defense Robert Gates.

Bodstrom is also an author of legal thriller novels and he has been called the “John Grisham of Sweden.”

Bodstrom’s father is Lennart Bodstrom, the Foreign Minister in the Social Democratic government of Prime Minister Olof Palme from 1982 to 1985. The elder Bodstrom was criticized for not heeding warnings that Soviet submarines were operating in Swedish waters and he survived a rare no-confidence motion against him in the parliament. However, WMR has learned that it was the CIA, which had arranged for U.S.-supplied Sound Surveillance System (SOSUS) technology to be transferred to neutral Sweden and Langley did not want details of the system’s capabilities to be tipped off to the Soviets. Lennart Bodstrom’s ploy was to suppress the story of Soviet submarine activity to protect CIA and Swedish intelligence “sources and methods.” WMR has learned that Lennart Bodstrom’s policy of non-engagement on Soviet submarines in Swedish waters was the result of a personal request by then-Vice President George H. W. Bush.

Bodstrom’s law partner is Claes Borgstrom, Sweden’s former Equal Opportunities Ombudsman and an avid, some would call it extremist, supporter of feminist causes. Borgstrom has been representing the two women who have accused Assange of sex crimes while he was in Sweden. One of the women, Anna Ardin, described as a “Christian feminist” has apparently left the country for the Palestinian West Bank and there are reports that she is no longer cooperating with the Swedish deputy prosecutor for Gothenburg, Marianne Ny. WMR has also learned that Bodstrom has had a close relationship with Ny.

The other woman who charged Assange is Sofia Wilen. It has been charged by some in Sweden that both women accusers were part of a carefully-arranged plot to bring sex charges against Assange in order to discontinue the Wikileaks Swedish asylum operation after the ultimate purpose was served: a major international news event designed to provide increased support for governments around the world, including Sweden, the United Kingdom — where Assange is now free on restricted bail — and the United States, to place draconian curbs on the Internet.

Wayne Madsen is a Washington, DC-based investigative journalist, author and syndicated columnist. He has written

for several renowned papers and blogs.

Madsen is a regular contributor on Russia Today. He has been a frequent political and national security commentator on Fox News and has also appeared on ABC, NBC, CBS, PBS, CNN, BBC, Al Jazeera, and MS-NBC. Madsen has taken on Bill O’Reilly and Sean Hannity on their television shows.  He has been invited to testifty as a witness before the US House of Representatives, the UN Criminal Tribunal for Rwanda, and an terrorism investigation panel of the French government.

As a U.S. Naval Officer, he managed one of the first computer security programs for the U.S. Navy. He subsequently worked for the National Security Agency, the Naval Data Automation Command, Department of State, RCA Corporation, and Computer Sciences Corporation.

Madsen is a member of the Society of Professional Journalists (SPJ), Association for Intelligence Officers (AFIO), and the National Press Club. He is a regular contributor to Opinion Maker.