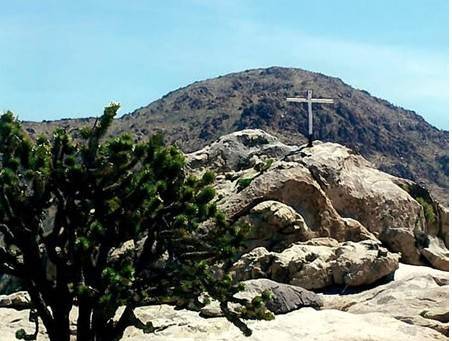 HOLY DISTRACTION, THE BATTLE OF THE CROSSES

This week, a 3 judge panel, the 9th Federal Circuit Court of Appeals, found that the cross, in itself, is not “proper” representation of American war dead.  A 40 foot cross in San Diego was the subject this time, millions spent on lawsuits, reported in every paper, just as with the Mojave Cross, two rusty pieces of pipe shown in the adjacent photo.

The similar case involving the Mojave Cross, one continually stolen and replaced, unseen except by birds of prey and backpackers, helped keep the attention of the American Legion and similar groups away from key  issues of veterans housing, veteran abuses, poor or nonexistent medical care for veterans and dozens of others, most ignored entirely.

The Mojave Cross had become an obsession with the Legion while attempts to get them to focus on veteran homelessness issues in Los Angeles fell on deaf ears.

This time, the Jewish War Veterans took the lead and the American Legion, unwilling to go ‘toe to toe” publicly with this small but powerful group, stepped aside, hoping they wouldn’t be noticed.  We noticed.  We noticed all of it.  We remember when Robert Rosebrock approached the Jewish War Veterans two years ago for support, at my behest, support for needed veterans housing in Los Angeles.  They turned away.  We also remember when Rosebrock, perhaps America’s best known advocate for homeless veterans, approached the American Legion.

They passed a resolution in California which was sent to Washington and suppressed.  Suppressed.  Yes, let me say it again, suppressed.  Why?

While these powerful groups, the American Legion and Jewish War Veterans are fighting over symbols, jockeying for cheap publicity and, in truth, involved in hokey and cynical fundraising manipulation by stirring race and religious hatreds, 20,000 veterans out in California, and more around the country are dying, some freezing, suicides every day, more ending up in prison.

California is just one situation but it is a “doozey.”

There, over a century ago, what was worthless land, too close to barren bluffs overlooking the ocean, was donated to Civil War veterans.  Bars and whore houses were built to help the veterans spend their pensions and a community grew up around it.  We call that community Brentwood, famous as the former home of O.J. Simpson.

364 acres of land, now worth between 2 and 4 billion dollars, titled exclusively for veterans housing is now a hospital, a cemetery and, shamefully, being divided up between local groups into something more akin to a country club or place for them to hold their “tea socials.”

They are trying to retake land from the rich and powerful, from groups aligned with, well, the Jewish War Veterans and the Washington friends that the American Legion seems to value more than veterans.  Brentwood is the home of some of the most politically powerful people in America and some of the most notorious.

While the newspapers report the ‘battle of the crosses,’ the narcissistic time wasting of those who value the dead more than the living, the living are quickly becoming the dead.

VA Secretary Shensiki and congress have earmarked $3.2 billion for veteran housing.  However, the cronyism and corruption that typified the “privatization” of nearly everything, war, torture and now veterans housing, has created a “black hole” where that $3.2 billion will disappear.  What will happen?

Veterans own billions in land across the US, held in trust by the Department of Veterans Affairs.  Where that land is wanted by others, it will be given away and sold.  Veterans housing, however, will be handled by special interest groups, churches with wild ideas, failed drug rehabilitation programs run by “hucksters” with political connections and petty gangsters who will get free land, free buildings and free money which will, somehow magically, end up being used for everything but veterans housing.

This is going on “full speed” as we speak and no one is saying a word, nobody really but Bob Rosebrock and his small group of supporters, the “Old Guard” who have been protesting these abuses every Sunday, without fail for almost 3 full years.

It is time we admit that those controlling veterans organizations, the real voices, are nothing but Washington hacks who should be “shilling” for pharmaceutical companies or selling used cars.  Their failures are epic and have been for decades.  The major veterans organizations lost their way 50 years ago and the “slack” has been picked up by dozens of activist organizations, unfunded but dedicated.

This is the truth of it and it is a shameful thing for the United States.

We could talk war itself.  Does anyone know why we are fighting or who?  At least check, for each estimated “Al Qaeda” member in Afghanistan, we had 20,000 troops.

In fact, upon closer examination, something newspapers in America and our Congress are unlikely to do, almost everything believed about the “war on terror” and “9/11” is proving to be something very wrong.  You may not know it now, you may never want to believe it, but it is true.  Something very wrong, very evil, very “unAmerican” happened and is still going on.

If you want to be abandoned, try defending the weak, the abused, the heroic, the honorable from the rich, the greedy and the heartless.

In February, Rosebrock will be in court.  He is suing the Department of Veterans Affairs for arresting him for protesting, trying to force them to do what they are supposed to do, protect and serve America’s veterans.  The ACLU is standing with him.

After three years, the police who arrested him repeatedly, employees of the Department of Veterans Affairs are standing with him also.

Most veterans groups are not.  Why?

Too busy with politics and religion?