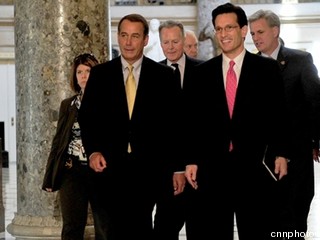 Cut taxes on the super-rich to fund wars based on lies; create a massive debt and now it’s time for Americans to pay. The super-rich will be fine and that’s what’s important to the GOP. By the way, watch out veterans, you know their budget knives are sharpened. Go fight the wars, and when you get home: Pay for them. … New ‘budget caps,’ that’s French for your benefits are too expensive.

By Brian Beutler at TPM

On Wednesday afternoon, new members of Congress will be sworn in, John Boehner will be elected Speaker, and the Republican majority will settle into control of the House of Representatives.

After some pomp and circumstance — and probably a few tears — the House will get to work on a dramatically different agenda than Democrats pursued in the 111th Congress. And that’s one side of a fundamental tension that will set the stage for (bipartisan) gridlock, posturing and, eventually, high-stakes brinksmanship.

On Thursday, Republicans will force a reading of the Constitution of the House floor. They’ll also institute the first of their weekly spending-cut votes: not on big ticket items, but a gesture to the conservative base to convince them they’re getting serious about spending. This week, they’ll vote to cut the budget of the House by five percent, or about 0.003 percent of the federal budget.

From that point forward, things will get much more aggressive and much more political. In a briefing yesterday, incoming Majority Leader Eric Cantor laid it out to reporters.

Leading up to the State of the Union address at the end of the month, as we reported, Republicans will up the ante on all their gestures to the base that brought them into power.

Cantor said they’ll put a bill on the floor to repeal health care reform next Wednesday, then go after “the job-killing regulations that have been pursued by this administration” until the State of the Union. After that, Cantor promised, “we’ll begin a discussion having to do with the budget.”

Not to say Republicans aren’t serious about these things, but they will not all go into effect in divided government. That’s when tensions will start to escalate.

First, Budget Committee Chairman Paul Ryan will set new budget caps for the House. These will dictate spending levels for House appropriators as they prepare new legislation to fund the government. He’ll set a ceiling at 2008 spending levels, which will require dramatic cuts in non-defense spending — and which will set up a showdown with the Senate, where spending caps will probably be higher. At stake will be a potentially painful government shutdown.

Then comes the debt ceiling fight. There, the consequences — national default — are even more serious, and yet somehow both Democrats and Republicans seem confident they can win. One side has to be wrong

And all of that will happen by the early spring.