Home WarZone The American People are not at war with anyone

According to Major General Dennis J Laich, U.S. Army-Retired, in his article Ideals Versus Interests , he tells readers a few things most everyone who questions or opposes the occupations of Iraq and Afghanistan already know, and a few tidbits about the overall Costs of Wars that people should be thinking about.

How is Victory in Afghanistan going to be defined? 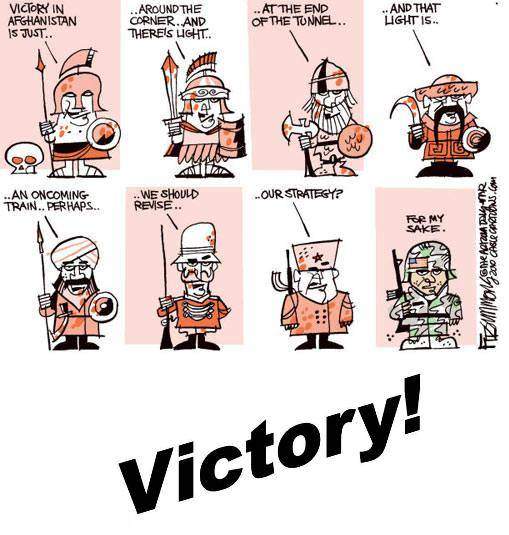 Major General Laich notes that Afghanistan is already America’s longest war and 2014 [not 2011] marks the date when “conditions based” withdrawals can begin. He also notes that “we should expect some definition of what a “win” in Afghanistan is. We should also expect clear, unambiguous, quantifiable, statements of the “conditions” that will allow withdrawal. Neither is likely to result from the [Obama] strategy review.

What Vital American Interests are being Protected or Preserved in Afghanistan

“Nor will we be told what vital American interests are being protected or preserved in this corrupt, failed nation state. The American people will accept this bureaucratic babble because they are not engaged,” MG.Laich said.

Veterans Today has been saying since 2004 that the American people have never been asked to sacrifice, commit, or be part of any serious war effort other than cheering on those who volunteer to endlessly endure multiple deployments. The perfect cop out is as long as the vast majority of Americans give the facade of supporting the troops by focusing their criticism on our government, and not our troops, heck these wars could last at least my lifetime, and I’m now 64 years young. I intend living until I’m 80.

MG. Laich also points to a few factors that I believe contribute to there not being a massive Peace movement on the scale of the Vietnam War. Those are my words not General Laich’s. His intent was not to address the lack of or more need for a Peace Movement. 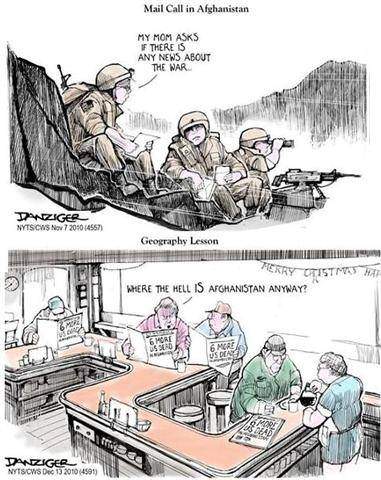 When MG. Laich says, “America is not engaged first of all because the war is being fought by less than one percent of the American people at tragic cost to our service members and their families; multiple deployments, high divorce rates, PTSD, prescription and illegal drug abuse, alcoholism, spousal abuse, or suicide crisis, and more than 1,300 deaths.” [as of 29 December 2009] the latest death toll of U.S. troops is now 1448 in Afghanistan throw in NATO and the number of Coalition deaths climbs to 2284.

The UN Assistance Mission in Afghanistan (UNAMA) reported that from 14 Sep to 10 Dec 2010 [quarterly report to the UN Security Council] that the number of Afghan civilians killed and wounded continues to grow in larger numbers compared to that of U.S. and Coalition Forces.

At the same time, the number of civilian casualties attributed to pro-Government forces [including U.S. and NATO] decreased by 18 per cent compared with the first 10 months of 2009.

Anti-Government elements [Taliban, Al Qaeda etc…] were responsible for the deaths and injuries of 4,738 civilians (or 76 per cent of the total number of civilian casualties) during the reporting period.

During the same period, UNAMA recorded 742 civilian casualties (or 12 per cent of the total number of civilian deaths and injuries) attributed to pro-Government forces.

Anti-Government elements [Taliban, Al–Qaeda etc…] continued their intimidation campaign against supporters, or persons perceived to be supporters, of the Afghan Government and the international community.

UNAMA recorded 403 assassinations and executions and 219 abductions of civilians during the reporting period. Compared with the same period in 2009, the number of civilians assassinated or executed by anti-Government elements in 2010 surged by more than 107 per cent. More than half of all civilian assassinations were carried out in southern Afghanistan.

Violence Against Women in Afghanistan Continues under the Corrupt Karzai regime.

In its report entitled “Harmful traditional practices and implementation of the Law on Elimination of Violence against Women in Afghanistan”, released on 9 Dec, UNAMA found that widespread child marriage, forced marriage (including the giving away of girls to resolve conflicts), restrictions on their movement outside the home and “honour” crimes were violating the rights of Afghan women and girls.

The report’s findings highlighted the fact that the full implementation of the Law by the Government across the country offered the best prospects for protecting women from these violent and discriminatory practices.

As part of its country-wide detention-monitoring strategy, UNAMA has been examining the treatment of detainees in a number of the detention facilities of the National Directorate for Security and the Ministry of Justice. The program is monitoring the extent to which Afghan authorities provide detainees with humane treatment and respect fair-trial guarantees during the pretrial incarceration phase.

During its visits to detention facilities, UNAMA received reports of cases of the severe abuse and ill-treatment of detainees by Afghan authorities, in which basic procedural protections had not been respected, in violation of Afghan and international laws.”

Most Americans have no incentive to seriously and passionately question, let alone oppose, the wars.

A military draft would engage the American people in the longest of ‘their’ wars.

The General also notes that “this one percent is made up overwhelmingly of poor kids and patriots from the third and fourth row economic [classes] of our population. And the first [class], the well off and well connected are AWOL. A military draft would engage the American people in the longest of their wars.”

To those folks who view me as a conservative turned born again liberal or leftist, I say that agreeing with MG. Laich on implementation of the draft is what sets me apart from most other Peace activist, especially those who are pacifists.

I am not a pacifist, never claimed to be one. Most of my friends who are purely anti-war pacifist knows and respects this. Heck, most of Military Families Speak Out (MFSO) do not consider ourselves as being pacifist even as MFSO members hit the streets to protest these wars along side of pacifists.

A war tax would engage the American people in the longest of ‘their’ wars.

A second truism General Laich brings up is the ever increasing fiscal cost of the wars when he says that “the American people are not engaged because someone else’s money is paying for the war (largely China) at the rate of more than six billion dollars per month all of it [on loan] to be repaid in the future with interest. One hundred million American taxpayers would become engaged if each month they received a “war tax” notice from the IRS demanding the immediate payment of their share, sixty dollars.

As mentioned in my article PBS: Will there be a Peace Movement in 2011? , Bob Abernethy the host of  PBS Religion and Ethics Newsweekly asked his guest panelist this question, “I have been wondering with respect to Iraq and now Afghanistan why there was no peace movement—not more of a peace movement. Do you think with Afghanistan, as we begin to come out of there, that there will be such a thin?”

The answer he got was respectful to all concerned, even those in the Peace Movement we need more of, but the response was nothing but half truths and a cop out. E.J. Dionne a Senior Fellow at the Brookings Institution – right-wing think tank – “I think going into Afghanistan there was very broad support [true] when we started because many people, except for pacifists and a few others who have legitimate reasons for opposing all war(s) [wrong], most people thought this was kind of a just war response [true, for even the Peace Movement was divided by the good war vs. the evil war], so you didn’t have a big opposition. I think now a lot of people say God, this is a terrible mess. I don’t have a good answer coming out of it, and I think that sort of undercuts what might otherwise be a big peace movement.”

I believe General Laich’s views on the Afghanistan war come closer to explaining why there is not more of a Peace Movement for “after nine years this war [Afghanistan] goes on with no first order questions being asked [by the American people, mainstream media, the Brookings Institute, and now public television], no challenges being raised and no outrage being expressed. When the blood and treasure of others is being spent it is easy to have ideals triumph over interests.”

Retired Major General Dennis Laich, AUS. Laich had a distinguished 35-year career in the Army Reserve, 14 of which were spent in various command positions, the last as commander of the 94th Regional Readiness Command in Ft. Devens, MA. His business career began in 1972 with Corning Glass Works and included positions with LTV Steel and Navistar International