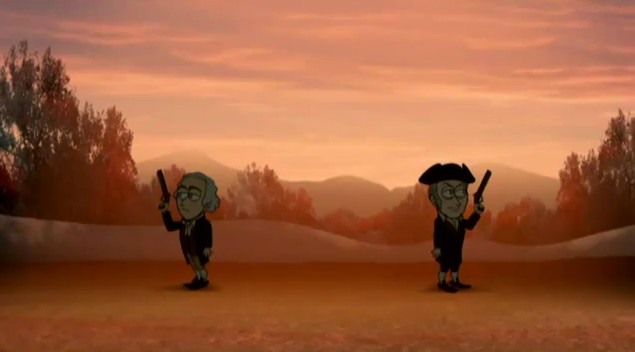 WHY KILLING ALEXANDER HAMILTON WAS A GOOD THING

There have, in our history, been no greater threats to America than those who stand against tyranny, or that’s what we are teaching our children. However, worse than any violence, any plot, naming tyranny, in itself, has been long considered treasonous and, worse still, pointing out the traitors among us, has long been the most despicable crime.

This simple cartoon and the truths it tells, is a lesson in history and economics equal to a dozen Harvard MBAs.  Those “kooks” telling you the money in your pocket is counterfeit, not American at all but issued by foreign owned banks run by an age old criminal syndicate bent on destroying the United States…..maybe, finally, they can be our real heroes.

If you want to thank them, you may have to visit cemeteries or prisons.  Modern America isn’t very understanding with truthtellers.

What if, just imagine it, what if all those crazy people we love sending the FBI and our troops after, the ones the newspapers call “supremacists” and such were the real Americans and the idiots reading the constitution in Congress, were something else?

That something else, is, if you come to recognize who paid their bills, means that TP stands for Traitor Party and nothing to do with a very English and sometimes  delightful hot drink served with lemon or milk.

Their constitution has a Federal Reserve Bank in it, has no habeas corpus, lets religious cults run our Air Force Academy or steal nuclear weapons.  Oh, you didn’t know these things because they weren’t in the paper?

This congress, the last election, all too late.  Here is how you tell from now on, if the first words out of a politician’s mouth isn’t “shut down the Federal Reserve,” look for someone willing to say them and back it up.

There is not, nor has there ever been a crime more despicable than that of ‘Federalism.’  If you have wondered who your government works for or what money is and why others have so much of it and you so little, the two video’s below are for you.  Don’t expect them to remain available long.