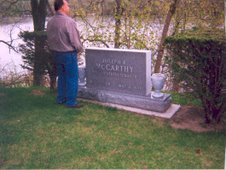 Uri Avnery looks at the alliance of racists and fascists behind a bill adopted by the Israeli parliament, the Knesset, to investigate the funding sources of human rights and civil liberties groups but not the settler organizations that are financed by U.S. evangelical sects and Russian mafiosi. Avnery finds the ghost of the disgraced Joe McCarthy.

GOOD MORNING, Joe. At home In the US, your name is mud. But here [in Israel] you can really feel at home.

In your time, you succeeded in infecting all of the US with hysteria. You detected a Soviet agent under every bed. You waved a list of Soviet spies in the State Department (a list which nobody was ever shown). In a hundred languages around the world – including Hebrew – the name McCarthy, McCarthyism, has become a household word. Yes, you made your mark alright.

But you were, after all, only a plagiarist. Before you, the House Anti-American Activities Committee terrorized the country, destroyed careers, hounded people into suicide and tarnished the reputation of the US throughout the democratic world. It “investigated” intellectuals and artists and branded many of them as “anti-American”.

I DOUBT that Faina Kirschenbaum ever heard about this committee. She was not born in the United States but in the Stalinist Soviet Union, and that’s her spiritual homeland. Her attitude towards democracy reflects this background.

The meaning of her Germanic name is “cherry tree”. But the fruits of this tree are poisonous.

This week, the Knesset adopted a bill tabled by Kirschenbaum, a settler who is also the Director General of Avigdor Lieberman’s party. The bill calls for the appointment of a Parliamentary Commission of Inquiry to investigate whether international funds or foreign countries are financing organizations that “take part in the campaign to de-legitimize IDF soldiers”. A parallel bill tabled by Likud member Danny Danon demands that the Inquiry Commission investigate whether foreign governments finance Israeli “activities against the State of Israel”.

It is easy to guess what such an investigation by a committee composed of politicians, appointed by the rightist-racist majority of the Knesset, will look like. The infamous Anti-American Activities Committee will look distinctly liberal in comparison.

It is very interesting to see who voted for and who against. Among the 41 who voted for, there were not only the usual fascists of the extreme right, headed by the declared Kahanist Michael Ben-Ari, but also the chief Orthodox representative, Jacob Litzman, the former army spokeswoman, Miri Regev, and the former army Chief of Staff, Moshe Ya’alon. Special mention must go to Matan Vilnai, who once almost became Chief of Staff, a leading member of the Labor Party, at present the Deputy Minister of Defense in charge of settlements.

Among the 17 who voted against were, of course, the Arab MKs who were present and all the Meretz members. A pleasant surprise was provided by Yitzhak Herzog, a candidate for the Labor Party chairmanship; the former Likud and present Kadima member Meir Sheetrit; and the Likud member Michael Eitan. Eitan is the last remnant of the Revisionist movement of Vladimir Ze’ev Jabotinsky, which combined an extreme nationalist agenda in foreign affairs with a very liberal attitude in local matters.

All in all, 58 of the 120 members of the Knesset took part in the vote. Where were the other 62? They were in hiding. Binyamin Netanyahu disappeared. Ehud Barak disappeared. Tzipi Livni disappeared. Even Eli Yishai disappeared. Presumably they all have a doctor’s certificate to cover their absence.

There are votes whose significance is greater even than the matter itself – votes that characterize an era and are looked upon, in retrospect, as decisive. This may well have been such a vote.

THE FIRST thing about this law that stands out is that it does not apply to all political associations in Israel.

If such an even-handed law had been enacted, I would have welcomed it. I am very curious about the origin of the money that supports the settlers and the other extreme-rightist organizations.

Huge sums, tens and hundreds of millions, are flowing to these bodies – many times more than the comparatively pitiful amounts received by the human rights and peace associations. Some of the recipients are devoted to the expulsion of Arabs from East Jerusalem. They offer Palestinian home-owners astronomical prices for their property and promise them new identities in the US so they can live there happily ever after. They use hired straw men, mostly Arab. The weak succumb to the temptation. That costs a lot of money, and one of the well-known donors is a famous billionaire who made his money as an owner of casinos. In Israel, incidentally, owning a casino is a felony.

It is known that the financiers of the extreme right include some of the heads of evangelical sects, born anti-Semites, who believe that Jesus will return to Earth when all the Jews are concentrated in this country. Then – either the Jews get baptized or they will be annihilated to the last man and woman. These adherents of the really-final solution are the main source of the money that finances many rightist associations.

This money nurtures openly fascist associations as well as more discreet ones, who advocate the dismissal of “leftist” professors from the universities, organize networks of student-spies who inform on their lecturers (another way of earning money for their studies). Some organizations monitor the media in order to cleanse them of people suspected of such misdemeanors as striving for peace. There is also a huge apparatus that combs all TV, radio and print media throughout the Arab world and provides our “correspondents for Arab affairs” (almost all of them army intelligence and Shin-Bet alumni) choice pieces, like something about a crazy Muslim preacher in Yemen or a particularly nasty statement in a Cairo salon. They are very successful in poisoning the wells of peace.

If a serious inquiry committee investigates the financing of the extreme right, it will discover that much of it comes straight from the pocket of the American taxpayer. That is one of the great scandals: the US government is financing many of the settlements. For dozens of years, it has turned a blind eye to the American organizations that are providing funds to the settlements – settlements that are illegal even in the official policy view of the US government. In the US, one can donate tax-free money for humanitarian purposes – but not for political purposes. Almost all the money flowing to the extreme right in Israel is officially marked as devoted to humanitarian purposes.

And what about the Russian mafiosi, who are intimately connected with the Israeli right? What about the various dictators in fragments of the former Soviet Union? Where does Lieberman, whose connections with these countries are well-known, get his money from? Police investigators have been trying for years to unravel this mystery, with no concrete results so far.

All this could keep several inquiry committees busy for years to come – and the initiators of the bills know this perfectly well. They are adamant: inquiry into leftist associations only, most definitely not rightist ones. (Rather like the lady who cried out in the darkness of a cinema: “Take your hands of me! Not you, YOU!”

THE INITIATORS of the bills did not hide the identity of the associations they want to “investigate”. The list includes B’Tselem (“In the Image”), a veteran outfit that monitors events in the occupied territories and is treated with respect even by the army; Shovrim Shtika (“Breaking the Silence”), a group of former soldiers that collects testimonies from soldiers; Yesh Din (“There is a Law”), which is active in matters of land ownership in the occupied territories as well as overseeing the military courts; Yesh Gvul (“There is a Limit”), which defends soldiers who refuse to serve in the occupied territories; Machsom Watch (“Checkpoint Watch”), an organization of female volunteers who oversee what’s happening at the roadblocks; “Physicians for Human Rights”, who have just been awarded the Alternative Nobel Prize in Stockholm for activities in service of the sick in the occupied territories; the Association for Human Rights, the New Fund, IR Arim (“City of Peoples”), which conducts legal fights against the penetration of settlers into East Jerusalem; and Shalom Achschav (“Peace Now”) for its important activities monitoring the building in the settlements.

(As far as I am concerned, this is a deeply insulting list because it omits Gush Shalom. Maybe the bodies hiding behind the initiators of the bill know that the Gush does not receive a penny from any foreign governmental source.)

There is nothing wrong with receiving funding from international governmental sources that are active in the field of human rights around the world. The Breaking the Silence group did not hide the fact that its recent book, a collection of the testimonies of 183 soldiers, was financed by the European Union. They boasted about it on the cover of the book.

That is a classic tactic of all fascist movements in the world. They wrap themselves in the flag of patriotism (“patriotism is the last refuge of a scoundrel”) and claim to defend “our troops”.

Our troops come from all segments of society. They include rightists and leftists, the religious and the secular, settlers and the informants of Breaking the Silence. Who appointed this peddler of poisoned cherries to speak for “our troops”? Woe to the army that needs defenders like these!

THE CAREER of Joe McCarthy was suddenly cut short. It was buried under one sentence that made history.

Joseph Nye Welch, a respected lawyer representing the US army, who appeared before the McCarthy committee, was shocked by his tactics and cried out: “Have you no sense of decency, sir, at long last? Have you left no sense of decency?”

The audience in the hall burst out in spontaneous applause. These few words electrified the American public. Suddenly the wheel turned. The McCarthy era ended, the public regained its sanity and since then, McCarthyism is remembered only as something to be ashamed of.

I am waiting now for a decent Israeli citizen to seal the open sewer in the Knesset that is threatening to submerge the entire country.

Mr. Binyamin Netanyahu, sir, have you no sense of decency left?