Jesse Kelly, a wholesome anti-abortion tea-partying right-wing Christian whack job, Giffords’ Republican opponent in the last election, had scheduled some kind of never-say-die loser-fete for January 15. My guess was it was the kick-off fund-raiser for his 2012 campaign. Seems to have been cancelled at this point. I emailed him this morning regarding his intentions given today’s tragedy, and while I haven’t received a reply, the web page has been edited and all mention of the ‘exciting announcement’ (except the URL) has been redacted. 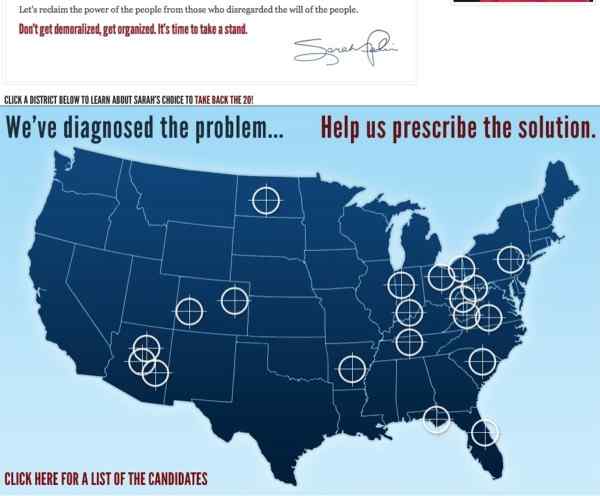 Rep. Gabrielle Giffords of Arizona was shot in the head Saturday and an unknown number of others were wounded when an assailant opened fire in an area where the lawmaker was meeting with constituents, officials said.

When Roll ruled the case could go forward, Gonzales said talk-radio shows cranked up the controversy and spurred audiences into making threats. In one afternoon, Roll logged more than 200 phone calls. Callers threatened the judge and his family. They posted personal information about Roll online. … Max Blumenthal in his The Transformation of the American Conservative Movement into Fascism notes: “In Tucson, Arizona, the windows of Democratic Representative Gabrielle Giffords’ office were shattered by shots from a pellet gun [last year].”

… While there is no evidence at this point to suggest that the shooting was politically motivated, Matt Yglesias points out that an anti-Giffords event was held in June with the billing: “Get on Target for Victory in November. Help remove Gabrielle Giffords from office. Shoot a fully automatic M16 with Jesse Kelly.”

As noted earlier, a gun was dropped at a Giffords event in 2009, and her office was vandalized in March. 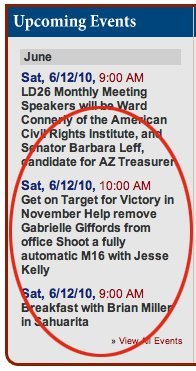