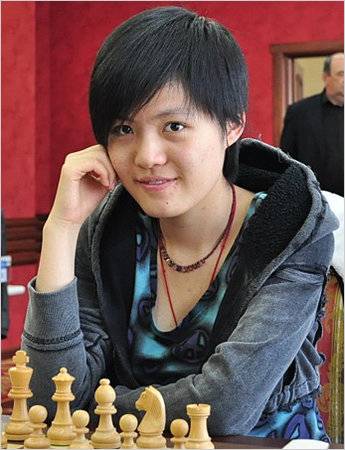 At 16 years old, China’s Hou Yifan has become the youngest person, male or female, to win a world championship. Her accomplishment reflects China’s investment in education and human capital which the United States has yet to prioritize: Allen L Roland

This is an inspiring story I love writing, for a nation’s greatest wealth is its human capital, and the empowerment of that capital should be a priority ~ which it isn’t in the United States.

As NY Times columnist Nicholas Kristof writes from Beijing,China where he interviewed and played womens world champion Hou Yifan ~ who quickly dismissed him in 21 moves ~ “China has also done an extraordinarily good job of investing in its people and in spreading opportunity across the country. Moreover, perhaps as a legacy of Confucianism, its citizens have shown a passion for education and self-improvement ~ along with remarkable capacity for discipline and hard work, what the Chinese call “chi ku,” or “eating bitterness.”  Full story ~

As Kristof correctly concludes ~ “ There’s a lesson for us as well. China’s national commitment to education, opportunity and eating bitterness ~ those are qualities that we in the West might emulate as well. As you well know after you’ve been checkmated by Hou Yifan.”

It is obvious that America has become lazy and apathetic and has settled for consumption and greed versus discipline and hard work ~ ( I am because I shop, spend and consume).

China and especially Japan look for the gift within their children ~ especially musical and academic ~ nurturing that gift during their childhood knowing that it will be a treasured companion of their soul as an adult. Discipline and hard work are engrained in their cultures and have become key factors in their countries industrialization.

We, on the other hand, have become a consumer nation and are unfortunately witnessing the deindustrialization of America ~ tens of thousands of factories have left the United States in the past decade alone. The United States spends approximately $3.90 on Chinese goods for every $1 that the Chinese spend on goods from the United States.

According to a new study conducted by the Economic Policy Institute, if the U.S. trade deficit with China continues to increase at its current rate, the U.S. economy will lose over half a million jobs this year alone. Manufacturing employment in the U.S. computer industry is actually lower in 2010 than it was in 1975.

And get this ~ The United States has lost a whopping 32 percent of its manufacturing jobs since the year 2000. Here’s why ~according to Tax Notes, between 1999 and 2008 employment at the foreign affiliates of U.S parent companies increased an astounding 30 percent to 10.1 million. During that exact same time period, U.S. employment at American multinational corporations declined 8 percent to 21.1 million. You can blame Bill Clinton, George W Bush and now Obama for this bloodletting of manufacturing jobs ~ and all in the worship of corporate PROFIT and GREED.

I’m sure you get my point ~ there is a disciplined mindset one achieves when you set your mind to something and strive to achieve it. It greatly helps if you have an educational system or family system that looks for and encourages your gift and intention. I remember tapping into that same mindset when I was determined to be a Navy fighter pilot and set my mind to accomplishing that dream. It was not easy, there were many stumbling bocks that I turned into stepping stones but I never lost track of my goal.

That hard work and discipline paid off many months later when I sat in the cockpit of my single place F3H Demon Interceptor on the number #1 catapult of the USS Ranger as the ship slowly turned into the wind, on a quiet South China sea, prior to an early  morning launch. With tears of joy flowing down my cheeks, I realized I was living my dream ~ and I knew there was nothing I could not accomplish if I set my heart and mind to it.

I’m sure Hou Yifan feels the same sense of fulfillment on taking her chess gift to the championship level she now enjoys. Commitment if the key and that can’t be manufactured ~ it must be driven from within by intention and purpose.

It can be as simple as saying YES to yourself and not being controlled by fear,

I am now doing the same thing as an online columnist along with my heart centered work with Veterans with PTSD ~ in that regard, Band of Brothers #4 begins this week. Another dream has come true because I am committed to making a difference with my empowering work with Veterans.

I have a great deal of respect for this quote on commitment from W.H. Murray ~ “Until one is committed, there is hesitancy, the chance to draw back– Concerning all acts of initiative (and creation), there is one elementary truth that ignorance of which kills countless ideas and splendid plans: that the moment one definitely commits oneself, then Providence moves too. All sorts of things occur to help one that would never otherwise have occurred. A whole stream of events issues from the decision, raising in one’s favor all manner of unforeseen incidents and meetings and material assistance, which no man could have dreamed would have come his way. Whatever you can do, or dream you can do, begin it. Boldness has genius, power, and magic in it. Begin it now.”

The key phrase here is that the moment one commits oneself, providence moves too ~ because doors will open that would not have opened until that commitment is made. Here’s a perfect example in Hou Yifan’s case ~ as Kristof writes; “Ye Jiangchuan, the chief coach of the national men’s and women’s Chess teams, told me that he played Ms.Hou when she was 9 years old ~ and was stunned. “I saw that this kid was special,” he told me, and he invited her to move to Beijing to play with the national teams. Three years later she was the youngest girl ever to compete in the world chess championships.”

I still vividly remember my grandmother reading my palm when I was a young and very precocious child; She looked at my palm, smiled knowingly and squeezed it. At that moment, I sensed I was special and it was enough for me to later find the courage to live my dreams.

Whatever you can do, or dream you can do, begin it. Boldness has genius, power, and incredible magic in it ~ it’s the magic of living your dream, being in sync with your destiny and making a difference by sharing the precious gift of yourself.