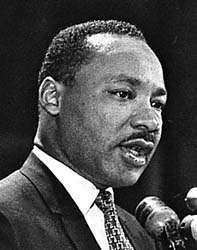 It is Martin Luther King’s fearless speech against the Vietnam war in 1967 that should be used today, word for word, in regards to Americas present war and occupation of Afghanistan and likely set the stage for his assassination in April of 1968: Allen L Roland

On the 50th anniversary of President Eisenhower’s speech condemning the dangerous rise of the Military-Industrial Complex we appropriately remember the words and actions of Martin Luther King Jr. ~ who also spoke out against this very same menace.

It was King’s fearless dedication to the truth of the injustices of the Vietnam War that elevated him to the top of the mountain ~ where he transcended fear with his truth ~ even though he knew his life was obviously in peril.

King, unlike Obama and a ‘ true’ Nobel Peace Laureate, knew that “A genuine leader is not a searcher for consensus but a molder of consensus”.

And while we’re still digesting the assassination of a Constitutionally sound Federal judge on January 8th ~ one that the news media has worked hard to sell us as a “wrong place, wrong time” accident of fate ~ watch this video which eludes to the government’s conspiracy to stop King before his planned march on Washington in 1968, because of his threat to the Military-Industrial Complex, and which eventually made him a target of an assassin’s bullet.

These strings all come together in this 9 minute video  including King’s deeply moving and prophetic top of the mountain speech: