… Before I tell you, Mr. Weinstein and the MRFF, of my total outrage at the U.S. Army for grading me as a “Spiritual Fitness failure”, I will tell you a few things about myself. … I can’t stand the chaplains as most of them are trying to always get me and my friends to “commit to Christ.”

Subject: I Am A “Spiritual Fitness Failure”

My name is (name withheld) and I am an enlisted soldier with the rank of (rank withheld) in the United States Army stationed at Ft. (military installation withheld).

I am in my early-to-mid twenties. I have been deployed downrange into Iraq and Afghanistan 6 times. I will deploy again for my 7th time very soon; to Afghanistan and more combat. All of my deployments have been very heavy combat assignments. 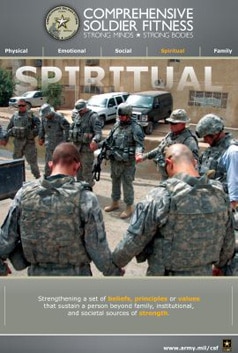 I have been wounded 4 times including traumatic brain injury. I have earned the Combat Action Badge, the Bronze Star and multiple Purple Hearts. I have fought in hand-to hand- combat and killed and wounded more than a few “enemy combatants.”

My religion? I was born a Methodist and guess I still am one. I’m not very religious but consider myself to be a Christian.

I cannot count the number of times that these chaplains and my own chain of command has described this war we fight as a religious one against the Muslims and their “false, evil and violent” religion. I am a Christian and therefore neither an agnostic nor an atheist though many of my fellow soldiers are such.

Now to the point. I, and everyone else who is enlisted in my company, was ORDERED by my Battalion Commander to take the GAT’s Spiritual Fitness Test not very long ago. Let me make this CLEAR, we were all ORDERD to take it. After we did, our unit’s First Sgt. individually asked us all how we did on the test.

There was NO “anonymity” at all. None of us were ever told that we did NOT have to take this Spiritual Fitness Test nor that we did NOT have to tell our FIrst Sgt. what our results were. A bunch of us “failed” the SFT and when we told that to our First Sgt., per his disclosure order, he further ordered us to make immediate appointments with the chaplains so that we would not “kill ourselves on his watch”. None of us wanted to do it but we were scared. None of us wanted to get in the shits with our First Sgt. who can and will make life miserable for anyone who might have said no to him.

They keep saying that this is all to stop us soldiers from killing ourselves but THIS degrading SFT “failure” only makes it worse. Two of my battle buddies who I KNOW are thinking of ending it all were a million times worse off after failing this SFT and being called a “spiritual failure” and then ordered to go see the chaplains.

I  felt like a total coward for not standing up to my First Sgt. but I did what he told me to do. I was scared to tell him no. So I went to see the chaplain. When this chaplain told me that I failed the SFT because it was “Jesus’ way of personally knocking on my door as an invitation for me to come to Him as a born again ‘REAL’ Christian” so that I  could be saved and not burn forever in Hell for rejecting him, I thought of 3 things. First, I thought of the fact that I was already born a Christian and did not need to be born again. Second, I thought of my battle buddy (name and rank withheld) who took a bullet for me in his face during the Battle of (name of Iraqi battle withheld) and that he was the same kind of Christian as me and this chaplain is telling me that my battle buddy (name and rank withheld) is burning in hell for all time. Third, I thought how I wanted to blow that fucking chaplain’s head right off.

Thank you, Mr. Weinstein and MRFF for listening and standing up. A bunch of us saw you on MSNBC. We also read about the enlisted guy at Ft. Bragg. Please tell Sgt. Griffith at Fort Bragg that he speaks for many of us who can’t handle the consequences if we spoke out. We have all read the letter you sent to tell the Army to stop this Spiritual Fitness Test. It cheered us up alot because that making us take that test is WRONG and using it to send us to the chaplains against our will is also WRONG. Please tell your lawyers at that big law firm company not to forget about those of us who want to speak up and thank them all but cannot.   (Name, rank, combat MOS, military unit, military installation withheld)