A terribly sad reality rears its ugly head with the realization that men and women of integrity otherwise have been forced to cheat–to pretend to blind themselves in order to preserve their jobs.

In an earlier article, I suggested several alternative media sources and writers since the mainstream media makes free speech a dream that was left behind.

Instead of celebrating journalistic integrity, the media–controlled by Zionists in America–refuses to condone any criticism of Israel.

When Helen Thomas, diva of the White House press corps was asked by a rabbi if she had any comment about Israel, she replied honestly, “Tell them to get the hell out of Palestine.”

She paid dearly for being forthright, saying that the Palestinians are “occupied” and that the Jews should “Go home” — to Germany, Poland, America and “everywhere else”.

In a later interview with radio host Danny Schechter, Helen revealed that for fifty years “she censored herself as a reporter.” 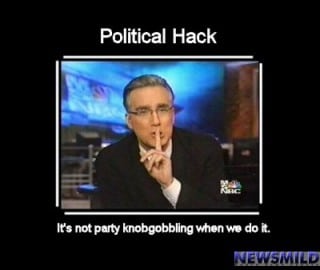 Think about how many otherwise honest, knowledgeable yet restrained reporters and TV anchors have worn the same albatross around their necks.

Widely respected MSNBC commentators like Keith Olbermann, Rachael Maddow and Ed Schultz are brilliant and informed. They can’t possibly have missed the plight of the Palestinians.

Like Helen Thomas they have had to censor themselves.  Anyone listening to these commentators’ analyses of major issues would know that they could not possibly be ignorant of the truth.

A terribly sad reality rears its ugly head with the realization that men and women of integrity otherwise have been forced to cheat–to pretend to blind themselves in order to preserve their jobs.

Imagine the three that I mentioned at MSNBC with their heads on the bodies of monkeys labelled “see no evil”, “hear no evil” and “speak no evil”.

Unlike the chimps with limited mentality, these media giants must know that they wear blinders, ear plugs and muzzles to avoid truths which they hold so important when it comes to other issues

Dr Diane Shammas, lecturer in American Studies and Ethnicity, says, “More than being oppositional, Thomas’ comments reflect an accumulative anger and ire at an America that has not only vilified Arab Americans in their media and immigration laws for over a century, but also with a U.S. foreign policy that for over 60 years biases Israel and is complicit in perpetuating the oppression against the Palestinians.”

Why did Helen blurt out the comment that led to her forced resignation from the White House Press Corps for Hearst papers? What did she feel that moved her to do what other commentators know is right but have been terrified to say?

Dr Shammas says that “her (Thomas’s) outcry embodies a half century of frustration and mental occupation that Arab Americans feel as their voices of historical truth is pilloried, discredited, and dismissed as either delusional or Anti-Semitic.”

Ironically, as Dr Shammas reports, “while defending Helen Thomas’ freedom of speech, the Society for Professional Journalists deems her remarks as ‘inappropriate and offensive’.”

Inappropriate? The only thing inappropriate was that Thomas was forced out of her job by silencer shills!

Offensive? Only to those who have been brainwashed by Israeli propaganda. Thomas’s journalistic critics silently admit to brainwashing. Either that or they’re utterly dishonest.

Dr Shammas posed the right question when she asked “Does our country’s unwavering allegiance to the Zionist ideology irrevocably trump and excoriate any truth-telling of Palestinian suffering?”

William Shanley, who is making a film about Helen’s career, commented:

“Pathetic. America has become a country in which a thief is on the cover of Time Magazine, the Golden Rule is under the boot of empire, and the truth about the illegal occupation of Palestine, the theft of land and the mass incarceration of its people, cannot pass lips.”